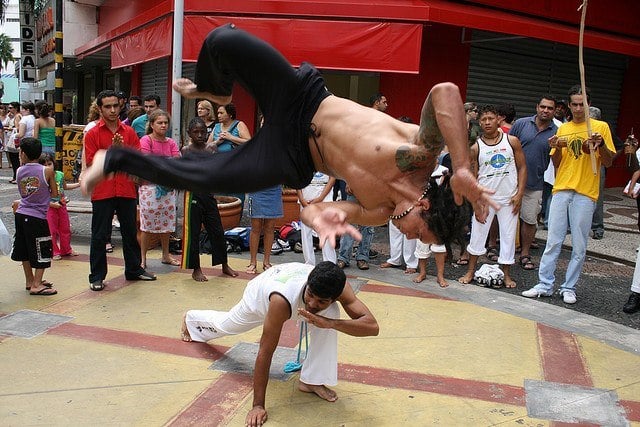 Brazil is well known for having some of the greatest celebrations in the world. New Years and Carnival are the biggest of those celebrations and Brazil’s largest tourist attractions. However Brazil has a very distinct culture of its own that it is now sharing with the world, it is the home of two very distinct and yet vastly different martial arts, Brazilian jiu-jitsu and Capoeira.

I would suggest if you are a bit of a Martial Arts enthusiast and a traveler that you try your hand at discovering the alternative arts in Brazil. You will never get any closer to the roots and philosophy of an art then you will by being in the place of its creation.

Brazilian jiu-jitsu is a hard ground fighting form often seen being used in fight arena’s such as the UFC. It is considered a modern day modified version of the combination of judo and Japanese jujutsu. I will not go in depth into the history; however as most know the art has been made world renowned by the Gracie Family who have proved its effectiveness in many ultimate fighting championships.

When travelling to Brazil I suggest trying your hand at this Martial art in one of the schools located in Rio de Janeiro such as Gracie Barra Rio de Janeiro-RJ or check there official website for a school, www.graciebarra.com.

Capoeira on the other hand is a Martial Art that began in Brazil by African slaves during the colonial period. I guess it could almost be considered a “forbidden” art that has become rather popular in modern times despite its past oppression by the Brazilian Authorities.

It was created by the sad oppressed slaves as a fight-dance. These fight-dances would take place in a circle or roda and the participants would play music, sing and perform sparring in pairs in the center of the circle. Those performing Capoeira became known as Capoeiristas and music became an important part of this art, often performed in wide open spaces to make for easy escape from the authorities.

Capoeira was outlawed in Brazil in 1890, and severe punishment awaited anyone who was caught. After slavery was abolished however slaves not being able to find jobs joined gangs, became involved in crime and police believed that Capoeira played a role in these activities and tried to stop them, however this only pushed the Martial art further underground…

Capoeira is a Martial Art full of history that is showcased in many of its techniques, if you are willing to take a chance and get out of your comfort zone into a high energy, beat driven and entertaining martial art I suggest you try Capoeira in its birth place, no better way to experience such a beautiful art than to learn it from the masters.

Capoeira also forms part of many night shows taking place every night in Rio de Janeiro, so even if you don’t try your hand at it I advise you at least go and watch it being played, you will not regret seeing such an amazing display of athleticism. If however you are brave enough to try your hand at Capoeira there are a list of schools available on the following website www.gringo-rio.com

Believe me you will not regret trying these amazing Martial Arts while you are travelling, they will make a magnificent story to tell and it will be an experience of a life time to learn these arts in the country of their birth!

About the Author: Tammerin Du Preez is a martial arts enthusiast living in South Africa. She loves to travel any chance she gets and enjoys trying her hand at any extreme sport at least once. You can catch up with her via Facebook.

That is an insane photo! Nice shot! I wouldn't mind giving a shot and trying Capoeira. A mate of mine back in Australia used to practice it. He used to train 5 times a week! I might get an opportunity to try it in Brazil later this year.

My German roommate in Medellin a few years ago had been doing capoeira for a long time -- 5+ years, and he was able to do backflips very easily. There are a couple of capoeira groups in Medellin, and I went to a lesson once -- I felt kinda funny, but the music and vibe of it is cool

Capoeira is one of the coolest things that exists in this world. I could watch people do it for hours.

My best friend is crazy about Capoeira, she dragged me along a few times to her weekly class - but I'm pretty convinced that it's simply nothing for me.. :P