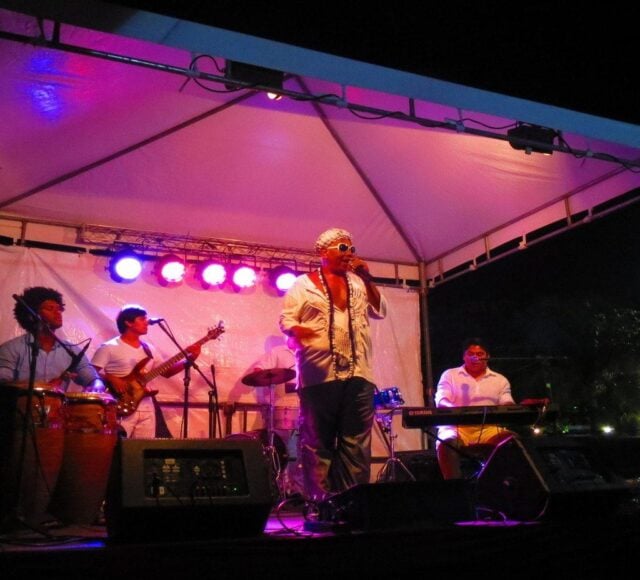 Front row seats to some good live music turned out to be the highlight of New Year's Eve in Salvador.

They wear white on New Year’s Eve in Salvador. They believe it brings good fortune in the New Year and who the hell am I to argue, so I put on the whitest outfit I could find without looking like I was selling ice cream.

I wore a white tank top and my black and white surf shorts, and for some silly reason, my shoes as well.

The night took us to the beach, where the tide came in when I was not paying attention, drenching my shoes. Good job moron, I said to myself. Maybe next time you can bring sand to the beach as well.

I laughed it off and got back to having a great time but oh what a clusterf*#k it was earlier in the night.

Our group got bigger, and at the last-minute a couple — a guy from France and a girl from the south of Brazil — joined us. The girl got sick, held up the group, and when she finally felt better we later rushed to the beach, to see the fireworks.

The disorganization of it all led to the group splitting up. I was with Ana (Spain), Takashi (Japan), Veronica (Chile), Sebastian (Chile), their friend from home whose name I cannot remember, and that couple, who apparently used us to get a cheaper taxi fare because they left us shortly after we arrived at the beach.

We had lost Eva, as well as Rob and Franki, the British couple, along with their German friend, whose name escapes me at the moment. Takashi and I looked for them, missing most of the very brief fireworks show in the process, hence no pictures.

Keep that in mind if you're in Salvador for a special occasion: coordinating a handful of taxis for a big group of people is difficult.

Takashi and I didn't find anyone during our search. But we later reconvened with Ana and the Chilenos to go see some live music in the nightlife district of Rio Vermelho.

Veronica had met the drummer from the band a day or so earlier, and we sat right in front of the stage, although I think that coincidence and timing had more to do with it than her new friendship. The table was open when we got there.

There was a special, all-you-can-drink for 75 reals (about $30) per table, so we had some beer, danced, and then when the yawning started we headed back to the Pelourinho, to get a last drink or two there before calling it a night.

That’s where we ran into Eva and we traded stories about the night, about how we were sad to lose her, but she was in good spirits after having a fun night with some friends, and we laughed about it in the end.

The only thing missing from my night was a New Years kiss but that wasn’t possible, what with Marília in Fortaleza. I mean, it was possible, but I wanted the kiss to be with her. 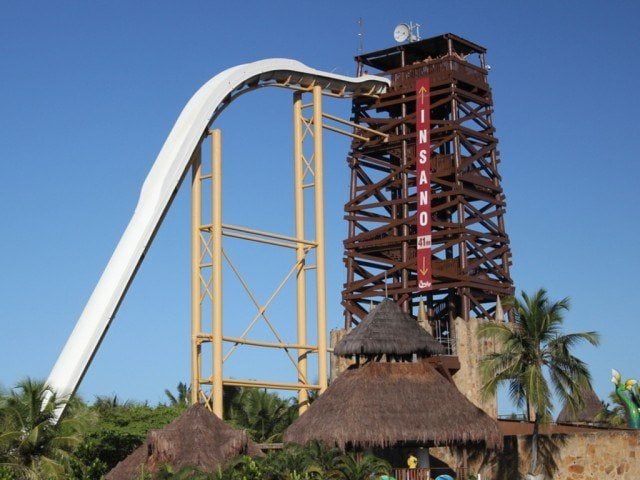 It's easy to understand why this slide at Beach Park was named, “Insano.” (photo: Vine Communications)

Alex, one of the owners at Full Sail Hostel, said this would be the day he finally goes to Beach Park, a place about 45 minutes outside Fortaleza, where you can ride some big slides and scare yourself senseless in the process, at least for a few moments.

The park claims to have the highest slide in the world, the Insano, 145 feet straight down. It was the first thing we rode.

The speakers attached to the stairway warn that pregnant women or people with heart conditions or high blood pressure should not ride this slide. I don’t have the latter two, and last I checked I wasn’t pregnant, so I was ready to go.

I started getting nervous as I waited for Alex to go first, as I watched him disappear over the edge, as I sat down to get ready to push off. Too late now, I thought. No turning back.

I crossed my legs at the ankles, as the park attendant told me, and my arms across my chest and before I knew it…

Gravity separated me from the slide for what must have been at least 40 percent of the fall and I could feel my stomach climbing inside me, but it was over before I knew it, and we rode again immediately.

We hit several other slides too, all of them fun, although none as thrilling as Insano, so I ended my day at the park there, to scare myself one last time.

I was exhausted after that day but was happy I did that, happy I spent the 180 reals (about $80) to get in. When we got back, we went to the hostel bar for caipirinhas and I waited for Marília to come pick me up so we could go to dinner.