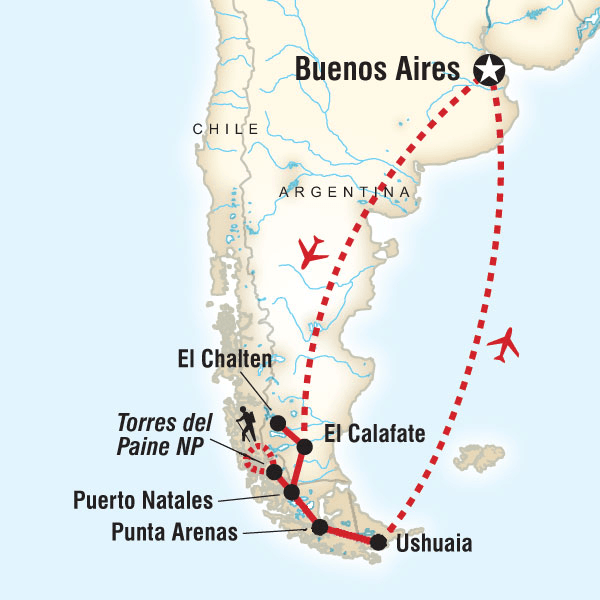 I'm excited to announce that I will be going backpacking in Patagonia on March 3, 2012, in partnership with G Adventures!

Departing from Buenos Aires, the 15-day End of the Earth tour encompasses the best of Patagonia, in both Chile and Argentina.

Hiking in the mountains of Patagonia, and standing in awe of its glaciers, has been a travel dream of mine for almost a decade.

Last year, I approached G Adventures about working together at some point during my journey through South America, and this trip is the result.

End of the Earth Itinerary

G Adventures offers a range of Patagonia trips, and frankly, they all look amazing.

The End of the Earth trip starts and ends in Buenos Aires, and includes the following highlights:

End of the Earth Tour: Discover South America's most amazing scenery, including majestic mountains and massive glaciers. Click here for the full itinerary.

First and foremost, we share a common value — inspiring people to change their lives through travel.

Also, G Adventures earned my admiration as I watched them embrace social media, and build relationships with travel bloggers years before it was cool to do so.

For example, Bruce Poon Tip (the company's founder) and I had started following one another on Twitter back in 2009.

The following year, we were drinking beers together at a bar in Washington, DC because he had wanted to attend one of the monthly DC Travel Tweetups I'd been co-hosting.

I'm also a huge fan of the Wanderers in Residence program that G Adventures launched in late 2010, which features several of my peers, such as Gary Arndt of Everything Everywhere and Dan and Audrey of Uncornered Market.

The trips they've taken with G Adventures have served to inspire me, and now it's my turn to do the same for you. 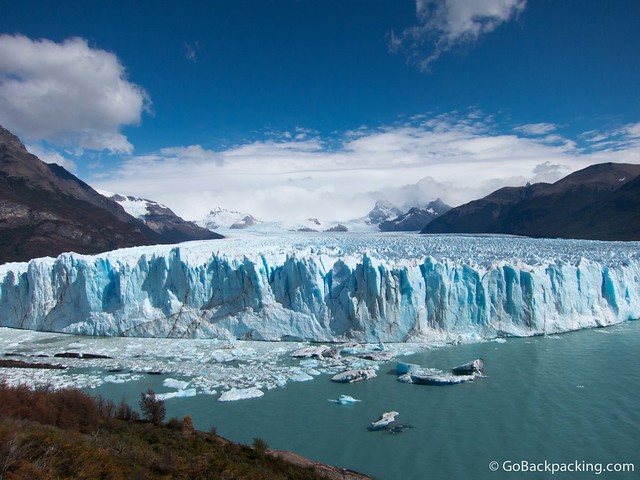 It will be business as usual here on Go Backpacking.

After the trip concludes in Buenos Aires, I'll shack up and get to work editing photos and writing blog posts to keep you motivated toward a journey of your own.

I'll be sharing my experiences on both Go Backpacking, as well as the G Adventures' blog.

But Wait, What About the Wildfire?

You may have seen that a wildfire broke out last Tuesday in Chile's Torres del Paine National Park. Visitors were evacuated, and the park was closed.

Since then, progress has since been made in getting the fires under control.

G Adventures maintains a page dedicated to safety updates from around the world, and how they may be affecting tours to specific regions.

According to the latest advisory for Torres del Paine (dated January 4, 2012), the rain dances being performed by G Adventures' staff are paying off, and part of the park is expected to re-open any day now. Excellent.

I am super excited to have the opportunity to experience all that Patagonia has to offer, and finally, see what it's like to go backpacking with G Adventures.

Join me on March 3, 2012, for one of South America's greatest adventures!

Disclosure: This Patagonia tour is in partnership with G Adventures. I am paying for transportation to/from Buenos Aires, all meals except when camping, optional activities, and any incidentals. The opinions expressed are entirely my own.

I am considering going for the same trip "End of the Earth" this year 2016 on march but a little worried about the hiking level difficulties.

The tour I took only had day hikes, and because the altitudes weren't that high (compared to say, the Himalaya), it wasn't that strenuous.

Sounds like another epic adventure is about to begin! G-Adventures is a quality tour operator, we went on a trip around Peru with them in 2009 - great experience. I look forward to following the adventure - Patagonia has been on my list for years, we didn't make it that far south on our last trip to South America

How exciting I'm DYING to get to that part of the world!

Dave, so jelous!! Its the only place I want to go in the world really. Its so great to look back as a reader from when you started your blog to now and see how far you have come! Maybe take the gregory chaos, just for sentimental value :)

Hey Stu, great to hear from you again. It's been quite a ride!

Believe it or not, I still use that Gregory Chaos backpack. I thought about getting something a little smaller, but it'd be hard to let it go.

Very cool Dave! Happy to see G Adventures working with you, I know you will provide a lot of value in return.

Enjoy it and thanks for the inspiration!