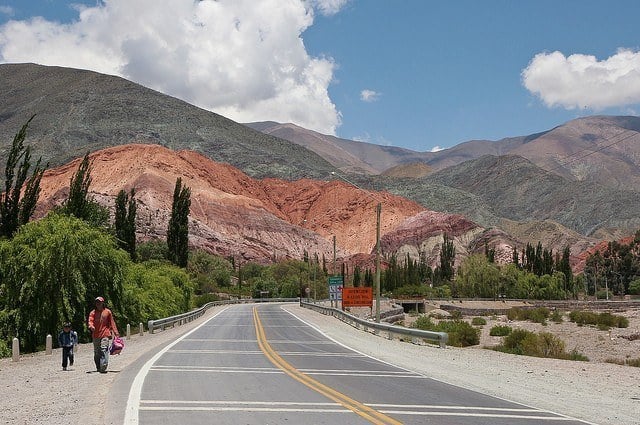 The last two tourist attractions were water-oriented: Colonia Carlos Pellegrini and Iguazu Falls. Now it was time for the Cerro de Siete Colores.

That's the Hill of Seven Colors, a knoll that's not grassy, not even close. It's in Northwest Argentina, an arid area of the country. It's all desert here.

On the way I stopped in Salta, the biggest city in this region, but the destination was Tilcara, a tiny town with easy access to the Cerro de Siete Colores. If you're there during the Argentine winter, pack your jacket and some well-insulated pajamas. It is cold here at night.

I found a room at a hostel by talking to people upon arrival at the bus terminal. You'll see them holding signs. It costs about 40 pesos (about $4.50) per night at most places, depending on how good you are at negotiating.

Within the town of Tilcara you'll find a handful of great restaurants, many of them specializing in lamb, probably my favorite meat after alpaca.

But you won't spend much time there.

I took the short bus ride to Pumamarca, home of the colorful hill so many people come to see. I remember running into a couple from Portugal and thinking, “Man, their Portuguese doesn't sound anything like the Brazilians I met in Buenos Aires.”

Not that I spent much time talking to them. I was too busy walking around the hills, taking pictures of the most famous one, the Cerro de Siete Colores, natural phenomenon thanks to the minerals in its walls.

There's a mix of red, green, orange and white, something you'd expect to see in abstract art. Maybe God used this hill as a canvas.

A few of the other hills have some color to them, but nothing as spectacular as the main attraction.

In the town below, you'll find arts and crafts the locals make and sell but not much else. I imagine it's a quiet place most of the time, like Tilcara.

I could have skipped this region, could have gone straight to Córdoba from Resistencia, but I wanted to spend a few days in a place that would be a nice change of pace, a place not as busting as Buenos Aires or as touristy as Iguazu Falls.

I was about to see something quite urban in Córdoba and something quite touristy in Mendoza, Argentina's wine country, so some relaxing time in the desert was just what I needed.

Agree, there isn't much to see in Purmamarca, although it is a marvelous location and the Cerro de los Siete Colores I think it is a place you must see before you die! Having said that, there are few other option to do here as you can hike or visit the nearby mountain villages like Tilcara (as you did) and Uquia.

In case you are in the area and you're not sure what to do, a little further there are other amazing scenery you might enjoy as the Red Labyrinth, Salar Grande, Ojos del Mar and Salar de Arizar - as the silence is incredibly powerful and striking here (no people, traffic, birds, animals, insects…nothing) you can experience a real sense of the desert and isolation. Highly recommend it! :-)