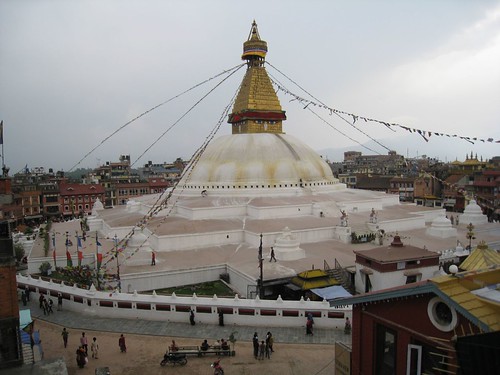 Since rioting Tibetans and the iron-fist of the Chinese government meant I'd miss the chance to visit Tibet, I was soaking up as much of the culture as possible in Nepal.

Nowhere was it more alive than around the Buddhist pilgrimage site of Boudhanath Stupa, the 5th World Heritage Site I visited in the Kathmandu Valley.

Life literally revolves around the stupa.

From sunrise to sunset, and well beyond into the night, Tibetans walk clockwise around the stupa, spinning the prayer wheels, repeating mantras and counting them on malas (prayer beads in the form of a necklace), and catching up with their neighbors.

Moving out of the brash and hectic tourist district, Thamel, to the serene, traffic-free area around the stupa was one of the best decisions I made on my trip.

I was able to photograph the stupa in all manners of light, from every angle I could come up with.

I woke up early in the morning to the echoing drums and Tibetan chants from the monks next door in the monastery that ran my guest house…which I much preferred to being kept awake every night by the brash sound of cover bands playing the same rock ‘n roll classics over and over.

Nope, it's easy to get to Boudhanath Stupa - just a quick taxi ride from central Kathmandu.

It's amazing to me that a World Heritage Site would be serene. I guess I pictured a bustling district, laden with fanny-pack wearing onlookers.

Was it difficult to reach this place? Is it much off the beaten path? I'll read the associated posts when I get a minute. Thanks for the flashback. Nepal is on our long list of places to visit.