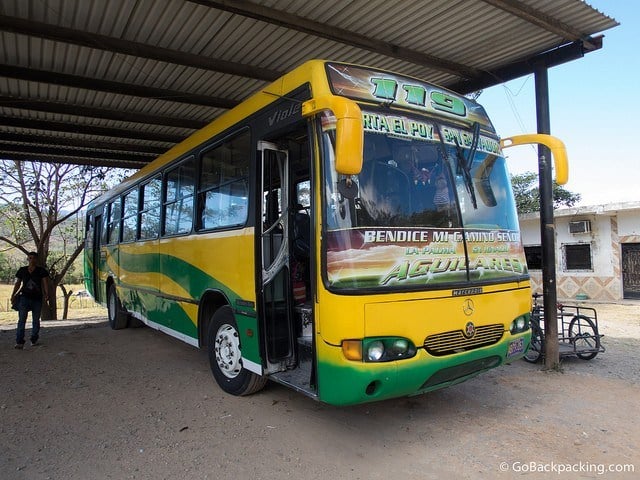 My original plan was to spend one of my six weeks on my 2014 Central America trip in El Salvador, but when I decided to spend $400 on airfare to Roatan, Honduras, I wanted to make sure I had at least a week there to make it worth the journey.

Ironically, by spending less time in El Salvador than planned, I arrived during a very wet week in Roatan.

If I had spent more time in El Salvador, I would've arrived five days later, and probably had a few more nice days during my time there.

By the time my chicken bus from the border arrived in San Salvador, the sun had set.

I stepped off the bus into the darkness of what was supposed to be a bus terminal.

It didn't take long for a taxi driver to approach me. I was anxious, but I didn't have a choice at that point.

Once we agreed on the fare to Joan's Hostel ($10), he pointed me toward his car, which was parked in what must have been the darkest corner of the street, behind both a giant garbage container and a parked bus.

I laughed nervously, shook my head “no,” and said I'd wait where I was until he brought the car around.

I began chatting with him in Spanish. During the ride, I learned he was in his 10th (and hopefully final) year of trying to get a visa for the United States.

He'd visited several times before, and wanted to live and work in Los Angeles.

He needed to stop three times to ask for help with directions to the hostel, and each time I was worried I'd get robbed while he was away from the car. We would've arrived faster had I noted the hostel's phone number.

Due to gang violence, San Salvador is one of the most dangerous cities in the world.

I had every desire to reach the hostel as quickly as possible.

I realize my concern for safety in San Salvador is ironic, considering I'm based in Medellin, but at least I know my way around the latter.

I always find it unsettling to arrive in a new city after dark, regardless of the country. 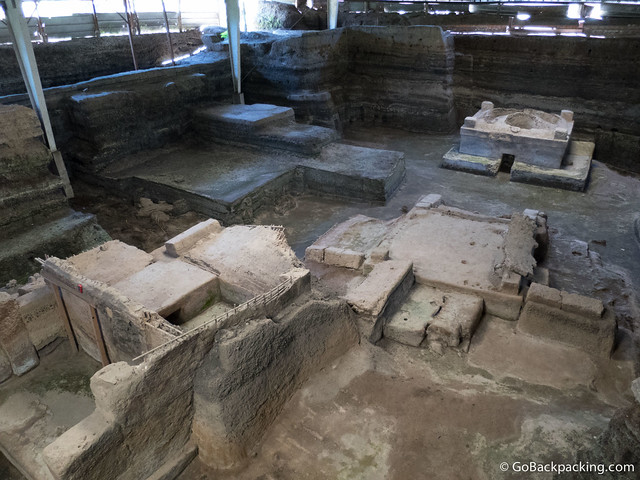 Joan's Hostel lived up to the positive reviews on Hostelworld. The owner used to live here, and she's furnished it to feel like you're staying in somebody's home.

The WiFi is some of the strongest I've found on this trip, and it's located around quite a few restaurants and ATM's, as well as a large, modern supermarket, so you don't have to go far to resupply. A dorm bed costs $15/night.

Where to Eat and Drink

Across the street from Joan's Hostel is an inexpensive Italian restaurant and cafe that serves up excellent personal pizzas. I ate here on my first night.

Some reviews on Tripadvisor stated there's nothing much to see, but I found it to be worth the effort.

It's not every day you visit a 1,400-year-old village that was buried and preserved by 10 to 12 meters of volcanic ash.

The instructions to get there using public transport are posted at Joan's Hostel, and it's easier than it seems.

In short, you walk about five blocks from the hostel, catch the 201 bus toward Joya de Ceren ($1).

Tell the driver where you're going, and he'll signal when you need to get off. From there, walk a little bit around the traffic circle, and hop a collectivo for $0.25.

The entrance costs $3, and there are signs in both English and Spanish.

I was joined by two young guys from California, which made it a little more fun than going on my own.

El Tunco is a popular surf beach about an hour south of San Salvador.

You can get private shuttles direct from Antigua. Otherwise, you'll need to take public transport (unless you rent a car) from San Salvador.

The beach is considered reasonably safe for tourists to visit.

Taxis to the international airport cost $30 and can be booked through Joan's Hostel. The trip takes 45 minutes without traffic.

The perception that San Salvador is extremely dangerous is a bit overrated. Yes, it has a lot of murders, but 99% is between the gangs and gangs and the police. As a tourist, you are pretty safe. I've been in San Salvador for 4 months now and have not seen anything bad. And we go to all the tourist places.

Arriving in a city after dark always gives me the heebie jeebies ... never mind that the cities you talked about are among the most dangerous in the world! :/

That was a good idea to have the taxi driver come and get you. Sometimes places can be a little sketchy. Great tips!

Thanks for the tips! I've got three weeks to get there before my sister leaves! ~Amanda

interesting post, Ill have to read more. I felt the same way in Naples and Athens, just wanted to get straight to the hostel, never felt safe. Very smart of you to make the taxi driver come and get you.