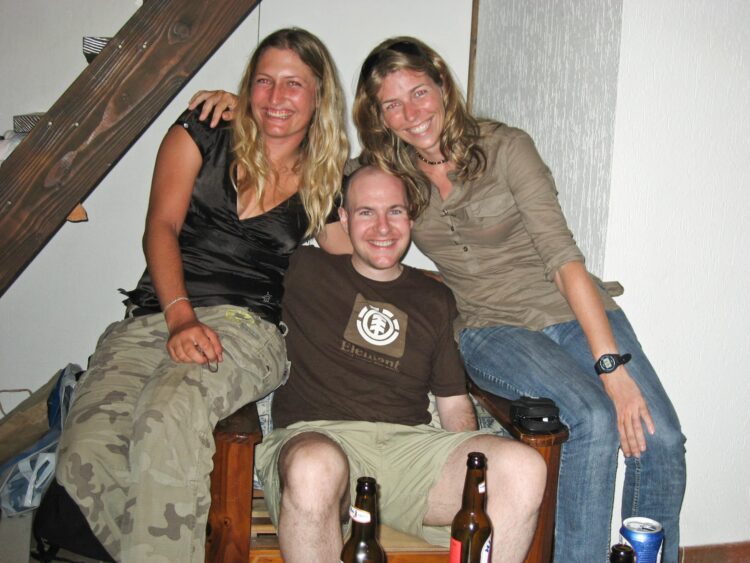 After a really challenging travel day from New York to Tahiti, I was wondering what I had signed up for.

15 hours of flying and all the airport waiting that goes along with it.

Every part of my body was sore, and I arrived at 7:30am with a full day ahead of me.

The service on Air Tahiti Nui did ease some of the stress though – I was quite happy with them and the food, though it helped that I managed to have extra seats on both legs of my trip.

Despite my plane arriving an hour late, Sam from Couchsurfing was waiting for me with a traditional lei when I walked out of the airport terminal.

I grabbed some cash from an ATM, and we were off in his VW – picking up the ferry schedule, coffee, and a drop-off at a nearby hostel.

Aside from two short walks around Papeete, I laid in bed all day given the lack of sleep in the past 24+ hours.

Sam is a French doctor, and the nicest guy I could've hoped for.

He's been on the island for a year, and seems to do it all – surfing, kiteboarding, wakeboarding, juggling, and practicing medicine.

He invited me to a friend's going away party that first night, and I had to muster the energy to take advantage of it.

We hung out with some of his friends at his new house, then walked to the backyard party a few feet from a black sand beach.

I was surrounded by French people, however a few spoke English, and I had a good time.

They had an 8-person drum circle going at one point, and there was plenty of food and beer. I ended up crashing at Sam's place after all.

The next morning, he drove me to the ferry so I could get over to Moorea, the smaller, less developed (and prettier) island neighbor.

I've got to wrap up, though it has been raining all morning so I'm about to get drenched on the way back to the campground (Chez Nelson).

Moorea is picture perfect, though I don't know that I'm going to manage to upload photos from here.

Internet time should be far cheaper in New Zealand (you can wait until Dec 7….right!?).

Ummmmmm... I really don't want to be the one to tell you the bad news about the internet in NZ. So, I won't be. I suppose there is a slim chance that it 'could' be better then Tahiti. How's that for positivity?

Jealousssssssss much! Hope the beer was good at that price ;)

I wish I could say it was however it tasted like a regular beer!