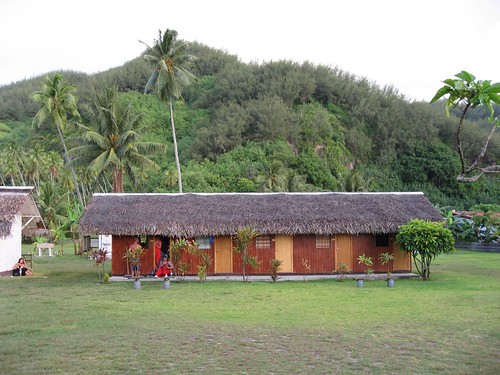 As you saw from the previous photos, Moorea is a little bit of paradise in the South Pacific. It's a short 20-minute ferry ride west of Tahiti.

I want to try and catch you up now that I'm in New Zealand and internet access is cheap by comparison. 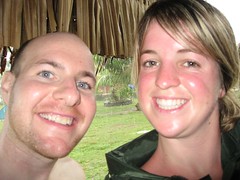 I spent 3 nights on Moorea and lucked out with a private dorm room the whole time.

Camping Chez Nelson was set on a fantastic stretch of (rare) beach along a beautiful section of the blue lagoon which encircles the entire island.

My first night I happened upon Lucy from New Zealand. We had first met on the brightly lit airport terminal bus at an ungodly hour like 1 am in Los Angeles.

Serendipity had her staying in the dorm next to me, along with Madeline from Scotland, who was working on her first novel and planned to finish it up with a 3-month stint on Fiji.

We dined on (tiny) lobsters and had an all-around great time together.

The next day it rained (a lot) and I said a wet goodbye to Lucy and Madeline, and let the day pass slowly.

Later, I met 4 new arrivals – Christina and Alexandra from Colorado and Alex and Robert from Germany.

I had taken Benadryl due to what appeared to be a swelling bug bite, though it unintentionally drugged me to sleep for 11 hours.

The next day I went snorkeling on the northern side of the island – which gave me a whole new appreciation for the views of the green mountains and wispy clouds.

Even when it rained, the views above and below water were perfect. We saw stingrays, blacktip sharks, tiki sculptures carved underwater out of coral, and plenty of pretty fish. 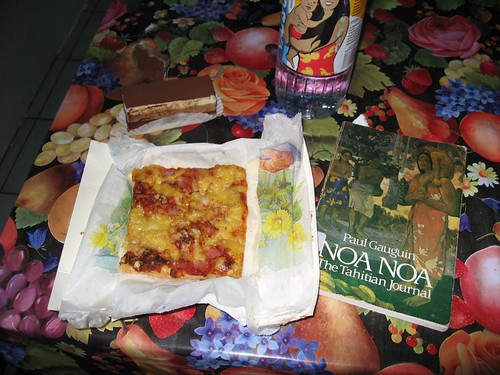 That third night I played a card game – Phase 10 – with my four new friends until we retired a little after 10 pm (late by Polynesian standards).

The next day I awoke, ate some more crepes with Alexandra, took the bus back to the ferry, and the ferry back to Tahiti.

See all my French Polynesia photos.

Bonus Video – I couldn't resist this monologue, though the turquoise waters don't show up as well due to the clouds.

Tahitian postcard goes to the first person to peg where I got the quote. While not original, it perfectly described my feelings at the start of this journey. :)

Internet access is super costly in French Polynesia - about $14 USD an hour. In New Zealand, it's cheaper - from free at some hostels to about $3-4 USD per hour. I'm still happy I didn't take a computer, I've enjoyed traveling light - less to keep track of.

Awesome pictures, I especially loved the one from yesterday with the dolphins! How expensive are you finding internet access to be? Are you glad/not glad that you decided not to take a computer with you?

Definitely "The Beach" Skip, making me want to watch it again now. Some nice shots there Dave I think I'd been spending all my time in the water, I'm a bit of a "freediver" so the stingrays looked cool. They are not often shy thats for sure.

benadryl for antihistamine right? been there before :) glad you arrived in one piece with all your luggage.

youll have to tell us how all the electronics are going (charger holding up etc?)

So far so good - though my mp3 player's battery life is only around 10 hours, it's held up fine on my first 3 flights. The camera battery has done well by me too - I didn't even charge it the first 6 days (all of Tahiti). So far the converter/adapter(s) are working well too. It feels like all my belongings have a useful purpose, and I'm not carrying more or less than necessary (by my standards).

Yeah, Benadryl makes you drowsy. For adults, you have to take about 50 mg before you will notice this effect.

There are Benadryl creams, sprays, etc. that can be applied locally on bites, etc. These locally applied forms typically don't cause drowsiness.

The name "Benadryl" may not be used in other countries. If not, find some anti-itch creams, then look on the back of the bottle to see if it contains diphenhydramine (the generic name of Benadryl).