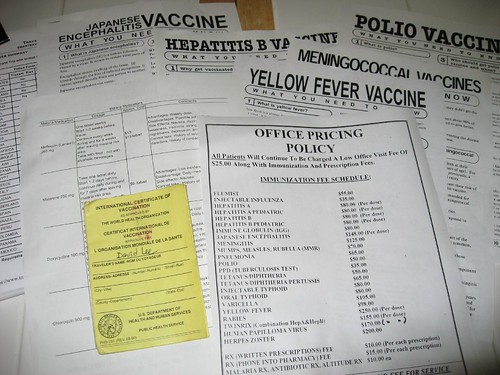 I was sitting in the waiting room of SmarTravel International Health Services yesterday during my lunch break when a bit of trepidation came over me.

The prospect of needles jabbing my arm didn't bother me so much as the feeling that I'm 5 months from leaving my life in the United States behind for the great unknown.

While I spend hours daydreaming for every few minutes I feel anxious, the concern always seems to weigh heavier.

So I filled out the necessary paperwork, as I've done the past two years when getting ready for pre-travel inoculations, and attached my laundry list of countries before handing everything back to the receptionist.

She was a little taken aback, though quite positive about my travel plans.

I then waited patiently for about a half-hour, despite the lack of patients, as I assumed they were querying and printing off the recommendations for each country.

Eventually, one of the nurses called me back, and she was also a bit tickled by the opportunity to tackle such an uncommon case as mine.

She began to go through the list of potential maladies, counting up the number of countries per illness to get a feel for which immunizations would be worth recommending.

A nice benefit of having had a recent trip to Costa Rica was the shots I had already received (covered by my health insurance).

Ultimately, to fill in the blanks on my yellow International Certificate of Vaccination card, she suggested the following:

After looking at the price sheet, and taking the advice of one of my readers to spread the shots out over time, I kept to my plan of starting the course of Hepatitis B shots (only) during the visit.

Researching the wide array of debilitating and deadly diseases in the world is a rather drab affair. Ultimately, deciding which shots to get is about managing risk.

SmarTravel offers an interactive map which highlights parts of the world affected by many of the diseases I've mentioned in this post.

As a result, I'm planning to skip the Japanese Encephalitis given it's limited to eastern Asia, and Meningitis which is prevalent in an even smaller section of central Africa.

At this point, I'm going to do a little more reading on the BootsnAll message boards and CDC, though I'm fairly comfortable with my decision.

In addition to Hep-B, I'm going to get the Yellow Fever, Influenza, and (adult) Polio shots in a few months.

Once I've been stuck like a pincushion, I should only have to worry about tackling Malaria.

I've ruled out Malarone as it's taken daily. I've had no side effects with the weekly Chloroquine, however much of Asia, Africa, and South America is resistant to it.

As a result, I'm left with Mefloquine (Lariam), which carries some nasty potential side effects, such as “nausea, dizziness, insomnia, strange dreams, nightmares, depression, and anxiety.”

The Malaria debates are frequent on travel message boards, and I've read many travelers' comments about skipping malaria pills in favor of managing the mosquito risks.

The one question I did ask at the travel clinic nurse was whether there are potential side effects to taking malaria medications long term (say weekly for 2 years).

The response from the clinic director was “no” and that many international volunteers, such as those in the Peace Corps, take them regularly for their full commitments abroad.