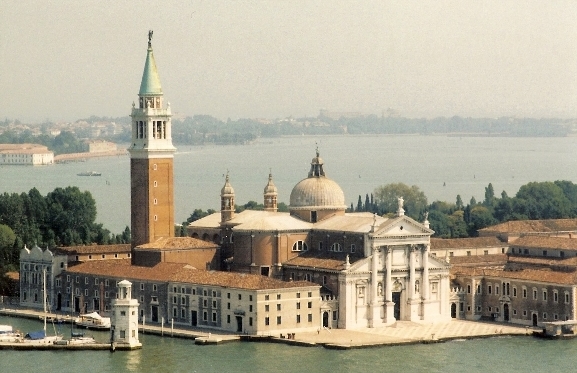 Church of San Giorgio Maggiore, my favorite in Venice, circa 1998

Before Colombia there was Italy. And before Medellin, there was Venice.

I'll never forget the first time I walked out of the train station, right onto the Grand Canal. It was love at first sight.

It was July 1998, the height of the summer tourist season, and I was on my first backpacking trip.

Part of my enamor for Venice was academic, the result of studying Italian Renaissance art and architecture for several years before in college.

The rest was the thrill of discovery that drives every traveler.

Gondolas bobbed in the water, while larger motorized boats ferried passengers for a more budget-friendly fare.

Actually, I didn't even pay for these water buses at first, nor was anybody on board checking.

My friends seemed less interested in this romantic, one-of-a-kind city, and after a few days, I continued on with them to Lake Como, and eventually Florence.

It was in Florence that we parted ways, and I was on my own for the first time.

Almost immediately, I took the train back to Venice and spent several more days exploring the city on my own.

In the Guggenheim Museum, I ran into an art student from my college on a study abroad program.

After meeting her, and picturing what it'd be like to live in Venice myself, I called my mom from a payphone to share my excitement, as well as the desire to live there!

That experience never materialized, and while I don't necessarily want to live in Venice now, I do feel an increasing desire to go back and see the city again.

And Rome as well, which I visited after Venice. Italy's grand capital completely overwhelmed me at the time.

I made it to the Colosseum and St. Peter's in the Vatican City, but neither the Spanish Steps nor the Trevi Fountain.

So after I wrap up my current journey through South America in the first half of 2012, I'm thinking of heading for Eastern Europe, and since I'd be in the region, Italy.

I could pick a base, maybe set up camp in one of the many rental apartments in Rome, and further explore the central and southern areas of the country, before heading north to Venice, and east around the Adriatic Sea to Croatia and beyond.

How can I go wrong?

I'm jealous!  I went to school in Perugia years ago & Venice was my favorite weekend getaway.

As for lodging in Roma, try the convents.  Clean, simple cells, I mean rooms, the nuns cook you a nice breakfast & you don't even have to go to morning Mass.  Great locations around the Vatican.

Sounds awesome Dave! Lately, I have been thinking about several places I've wanted to live in before I resided in Medellín and have been obsessing to revisit them. It is quite coincidental that we have been thinking of the same thing but with different places. Medellín will always be there, it's time to say hello to some old friends and lovers and rekindle those relationships so to speak.

Besides, why wouldn't you? You get paid to travel! :)

You're always welcome in Italy. And the north east it's not only Venezia, there are many wonderful cities ( don't miss Trieste ), spectacular mountains and of course the best wine! Slovenia and Croazia are both beautiful and worth a trip.

I share your love for Italy. I fell in love with the countryside, the people & the food last year while backpacking in northern Italy. Toying with the idea of living in Italy for a year in 2012 or 2013 :)

Italy is great florence specifically, for me.