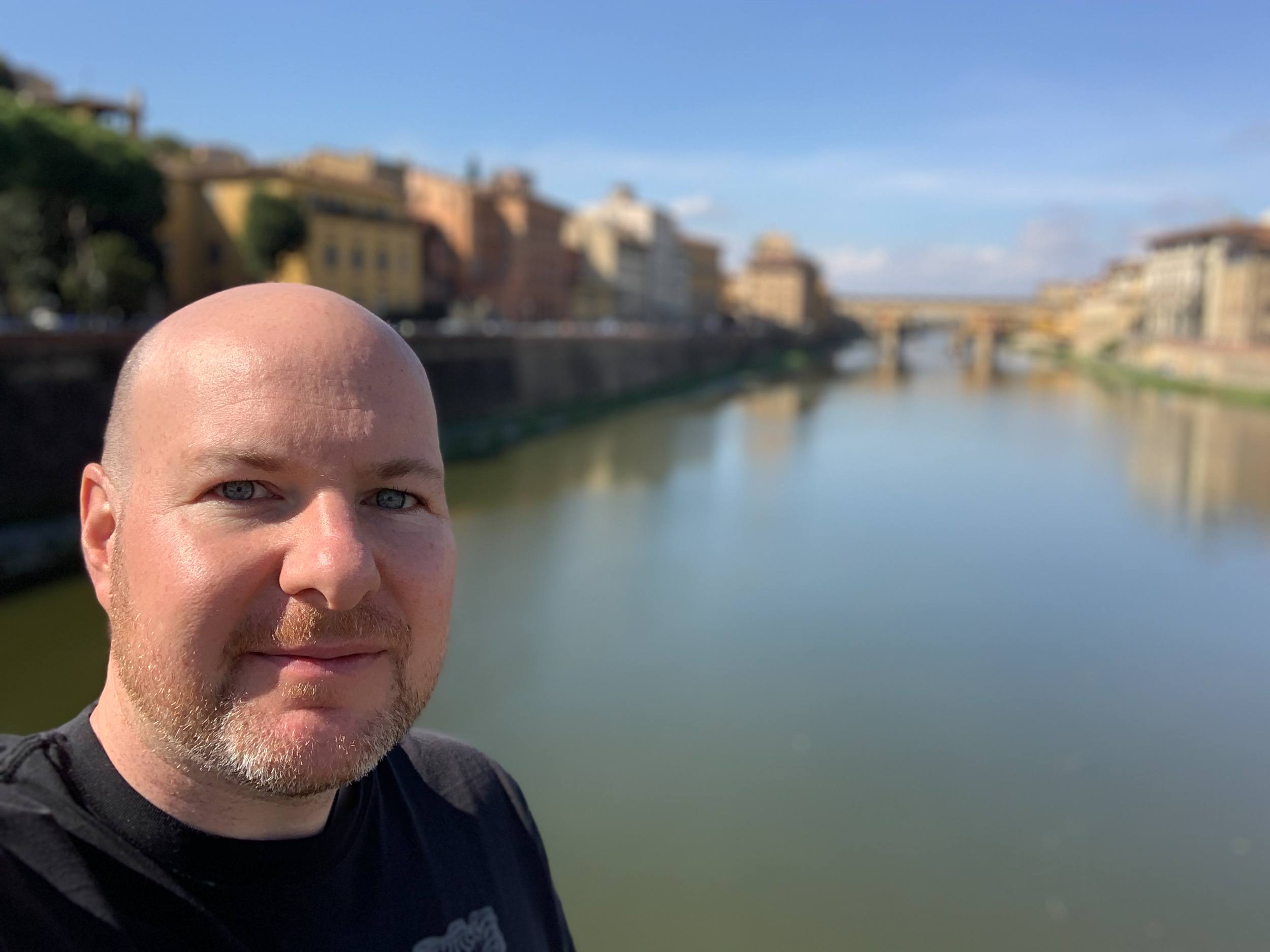 Twenty years ago this past July, I arrived in Florence by train with three of my best friends from college.

We were 21-year-old fresh-faced backpackers, a fairly clueless, but innocent group of American guys bumbling our way across the European continent.

It was in Florence, about 10 days into our two-month backpacking trip, that it became clear we had different priorities on the road.

I loved Venice. A few of them didn't think much of it, leading us to head for Lake Como earlier than I would've liked.

I wanted to explore every church and museum in Florence, the birthplace of the Italian Renaissance. Two of my friends were content to spend an afternoon reading and sleeping at our hotel room while I used the time to visit the Palazzo Medici and Santa Maria Novella church.

In spite of our high points being on the ground in Paris the night the French beat Brazil to win the World Cup on their home turf and partying in Amsterdam and Prague together, our travel tribe was coming unglued.

A few guys missed their girlfriends at home, and another had money issues. And so it was in Florence these concerns were aired, and decisions were made.

My three friends altered course to fly home early, while I remained in Florence, before moving on to Rome, Nice, England, and Ireland. Continuing the trip was a no-brainer for me, even if it meant going it alone.

And it was in the decision to go it alone that I experienced a newfound sense of independence and self-reliance.

After all, it was their idea to spend the summer after college graduation backpacking in Europe, not mine. I was the friend who didn't want to miss out. 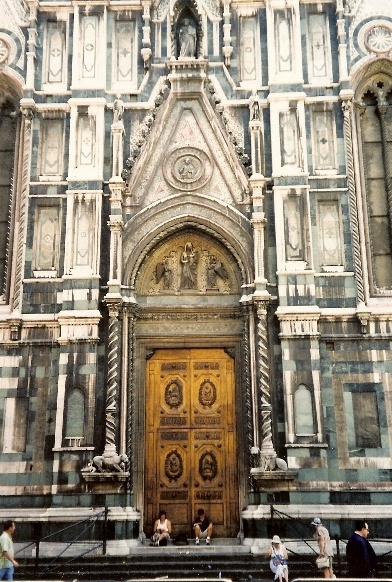 Two of the author's friends reading at the Duomo, 1998

Fast forward five years and I set a more grandiose goal to save for a trip around the world. Five years after that, I'd met my savings goal, resigned from a customer service management job, and was busy living my dream.

Two decades after that decision to stay in Europe on my own, I've now traveled to nearly 70 countries (almost all solo) and turned my passion for travel into a career as a travel blogger.

This month marks the 11th anniversary since I quit my last job to pursue my passion for travel. Crazy!

When I joined the Adventure Travel Trade Association earlier this year, and applied to attend the 2018 Adventure Travel World Summit in Tuscany, I saw it not only as an opportunity to learn more about the organization, its members (who are primarily tour operators), and Tuscany, but also as a chance to revisit Florence. 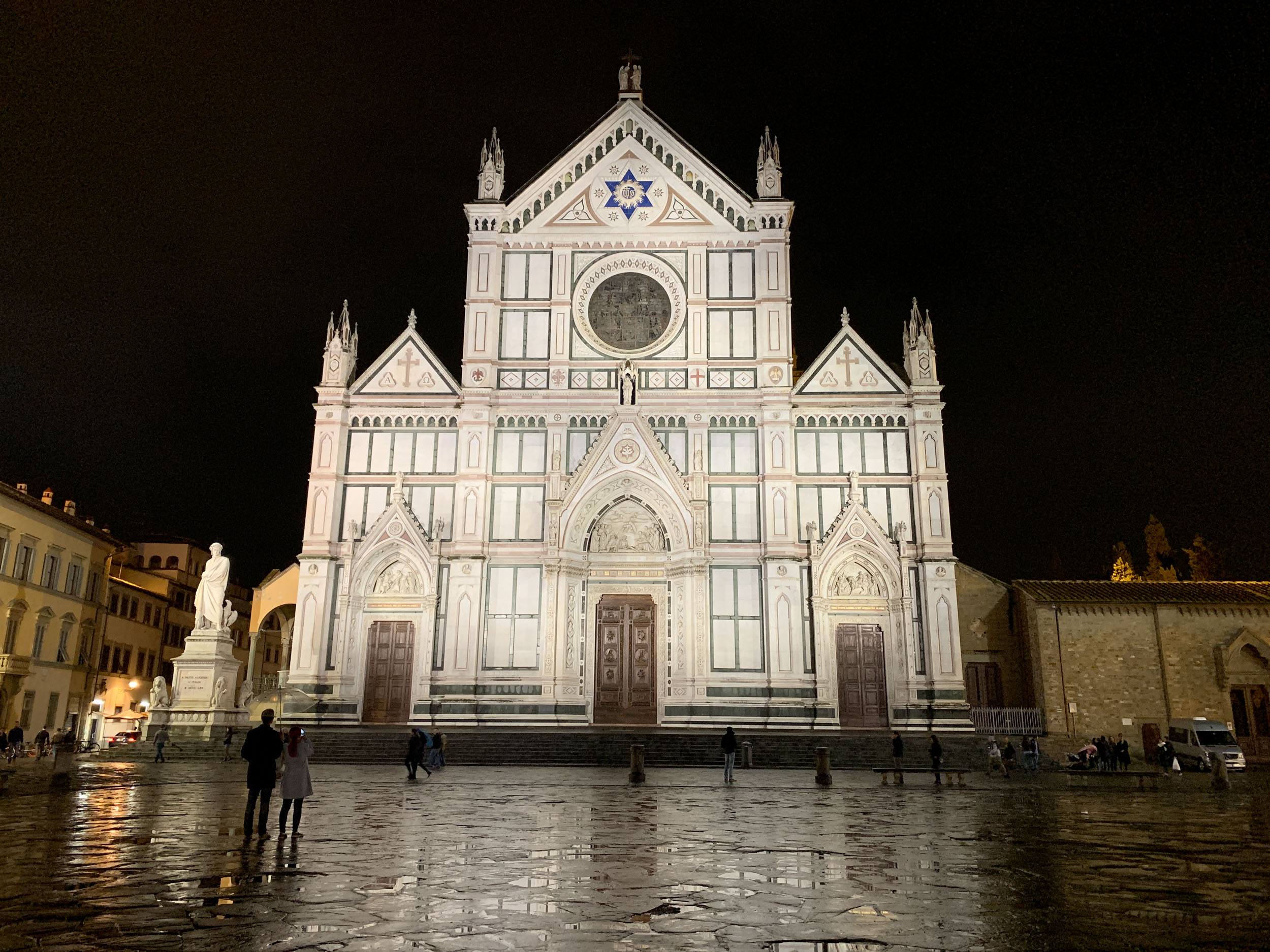 Basilica of Santa Croce, which houses the tombs of Michelangelo and Galileo

Stepping off the high-speed train from Milan, I'd arrived in Florence to a chilly rain.

The queue for a taxi looked to be at least a hundred people long, and I didn't have the patience to figure out the buses.

Google Maps suggested it was a 20 to 30-minute walk to my hostel. I took off hoping to flag a taxi once I got away from the train station, only there were practically no taxis in the streets.

Still tired from jetlag, now wet, and increasingly grumpy, I took shelter in a random restaurant in an alley.

Once seated, I noticed the tables offered a direct view of the Palazzo Vecchio a block away. I toured the palace in '98, though I remember it more for its iconic exterior than interior.

I ordered overpriced lasagna, drank a hot cappuccino, and carried on the last little bit to my hostel.

Checking into my dorm room at Riverbank's Hostel, a room with four single beds and a queen size bed with barely enough room to walk between them, I had flashbacks to when I was younger and didn't mind the random company of strangers.

At 42, I'm technically still welcome in most hostels, but find myself less willing to sacrifice privacy and a peaceful night's sleep to save money. Clearly, though, I'm still game for giving it a try.

That didn't last long. In addition to three young guys already in my room, I was informed two women were sharing the large bed, making for a total of six people in what was supposed to be a five-person dorm.

Between having trouble falling asleep due to jetlag, and then once falling asleep being woken up by two young women being loud in another room, and later a guy in my room leaving at 4 am for an early flight, I gave up.

I took a loss on the dorm and booked a small room in nearby Sani Tourist House for my last two nights.

I spent the next two days re-visiting some of Florence's most beautiful landmarks, while quietly reflecting on my decision to stay in Europe 20 years ago, and how that experience has impacted my life ever since.

I also enjoyed a few thing I couldn't afford as a backpacker, including a refreshing cocktail at Locale Firenze bar and dinners at La Leggenda dei Frati and the new Gucci Osteria.

(Note: All of the photos in this story were taken with the incredible new iPhone XS Max. The quality is so good; I didn't even edit them. What you see is what you get. The iPhone XS Max is available on Amazon in gold, silver, and space gray with a choice of 64 GB, 256 GB, or 512 GB memory.) 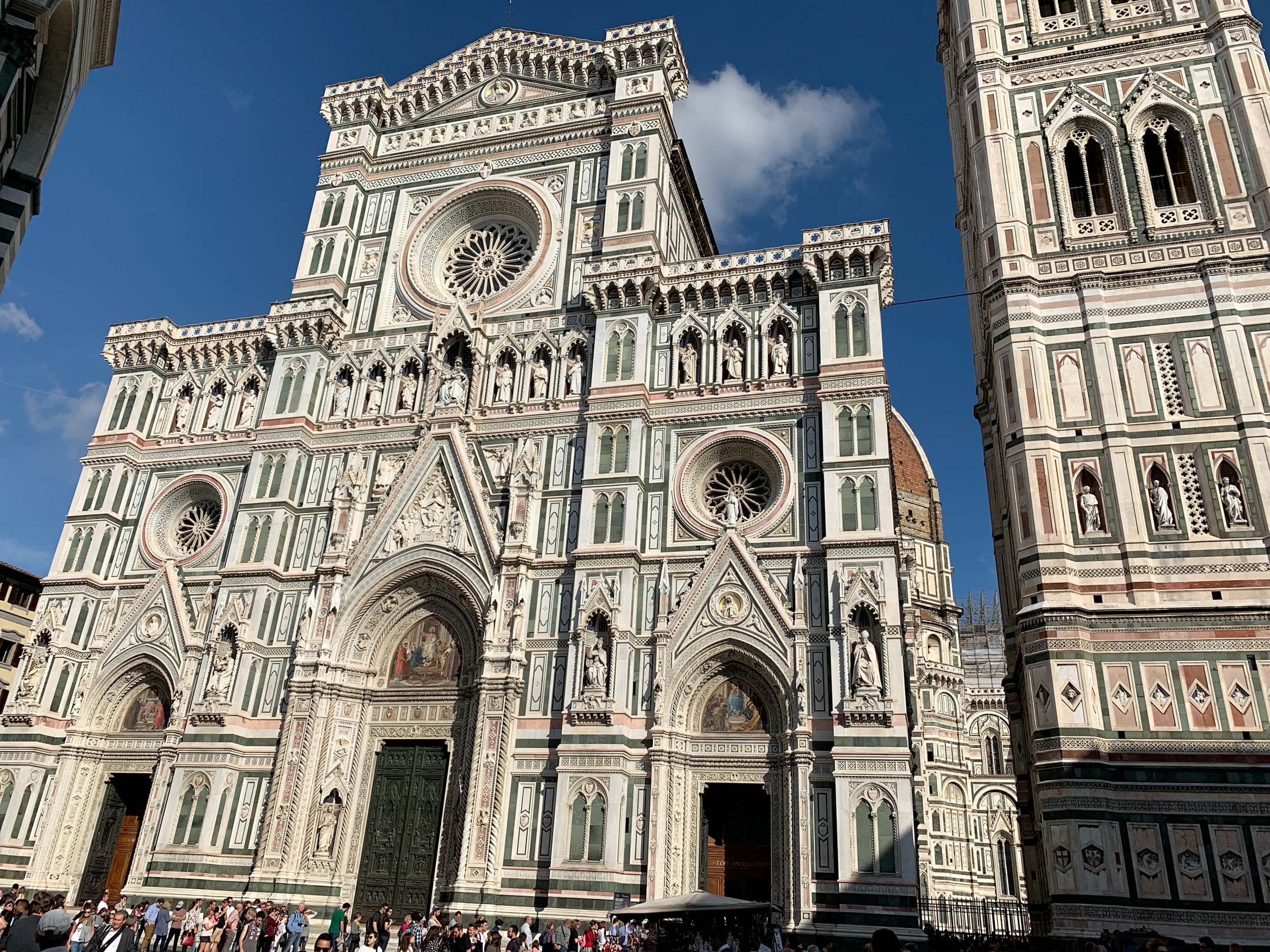 Florence's 13th-century cathedral, Cattedrale di Santa Maria del Fiore, is a testament to the craftsmanship of the Italian Renaissance.

In the humble opinion of this former art history student, the exterior composed of white, pink, and green marble make it the most beautiful church facade in the world.

It's also the fourth largest cathedral in the world. Milan's cathedral, which I visited a few days earlier, is number three. 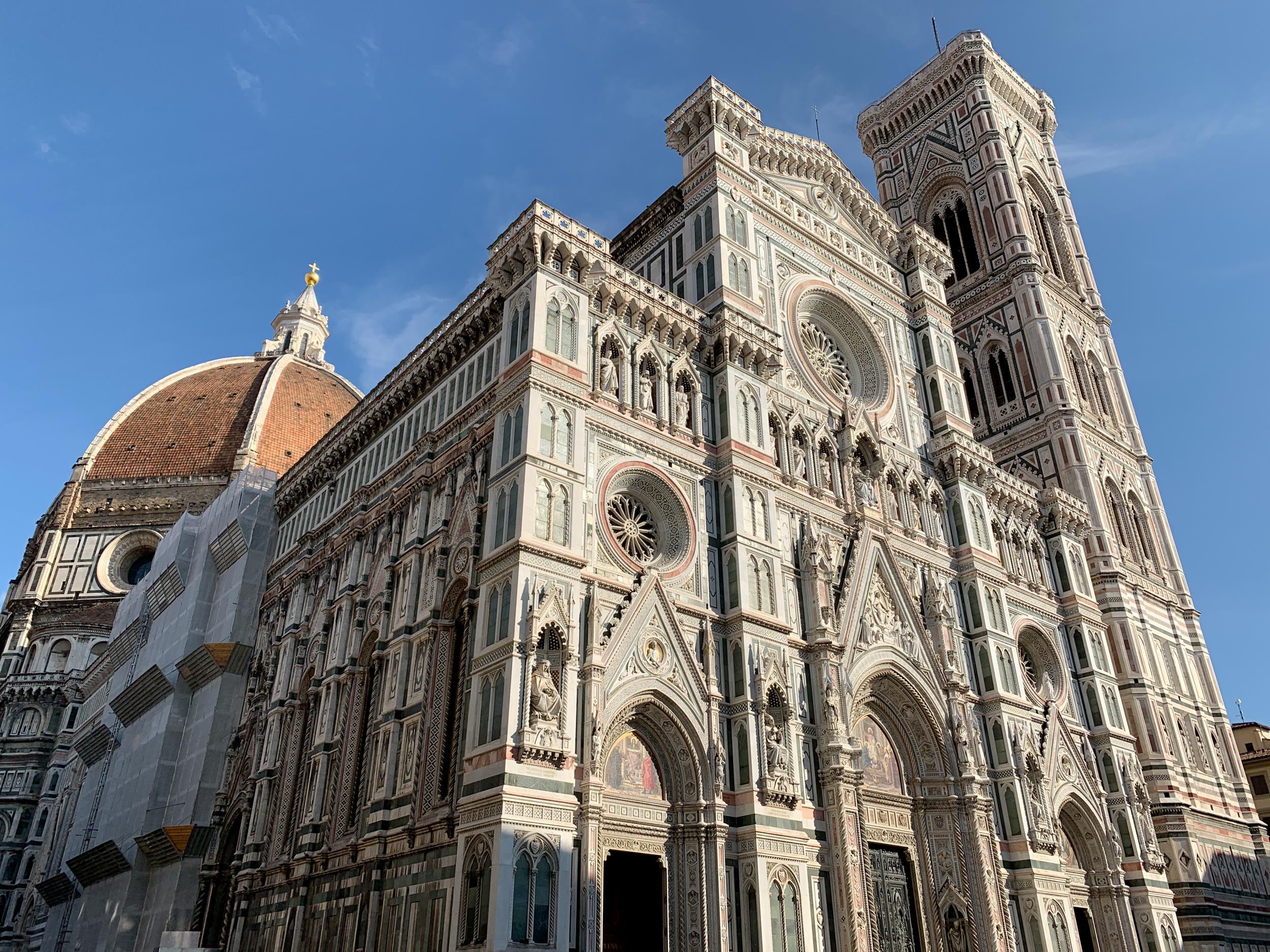 Back then, I also went inside (which is still free to do today), and climbed the curved stairs that wind around Brunelleschi's dome to the cupola up top. Today, access to the cupola requires a timed ticket.

Tourism-wise, it felt like there were more people around the cathedral in October 2018 than there were at the peak of summer, July 1998.

Once you get away from the historic center of Florence, a UNESCO World Heritage Site, the crowds are not so overwhelming. 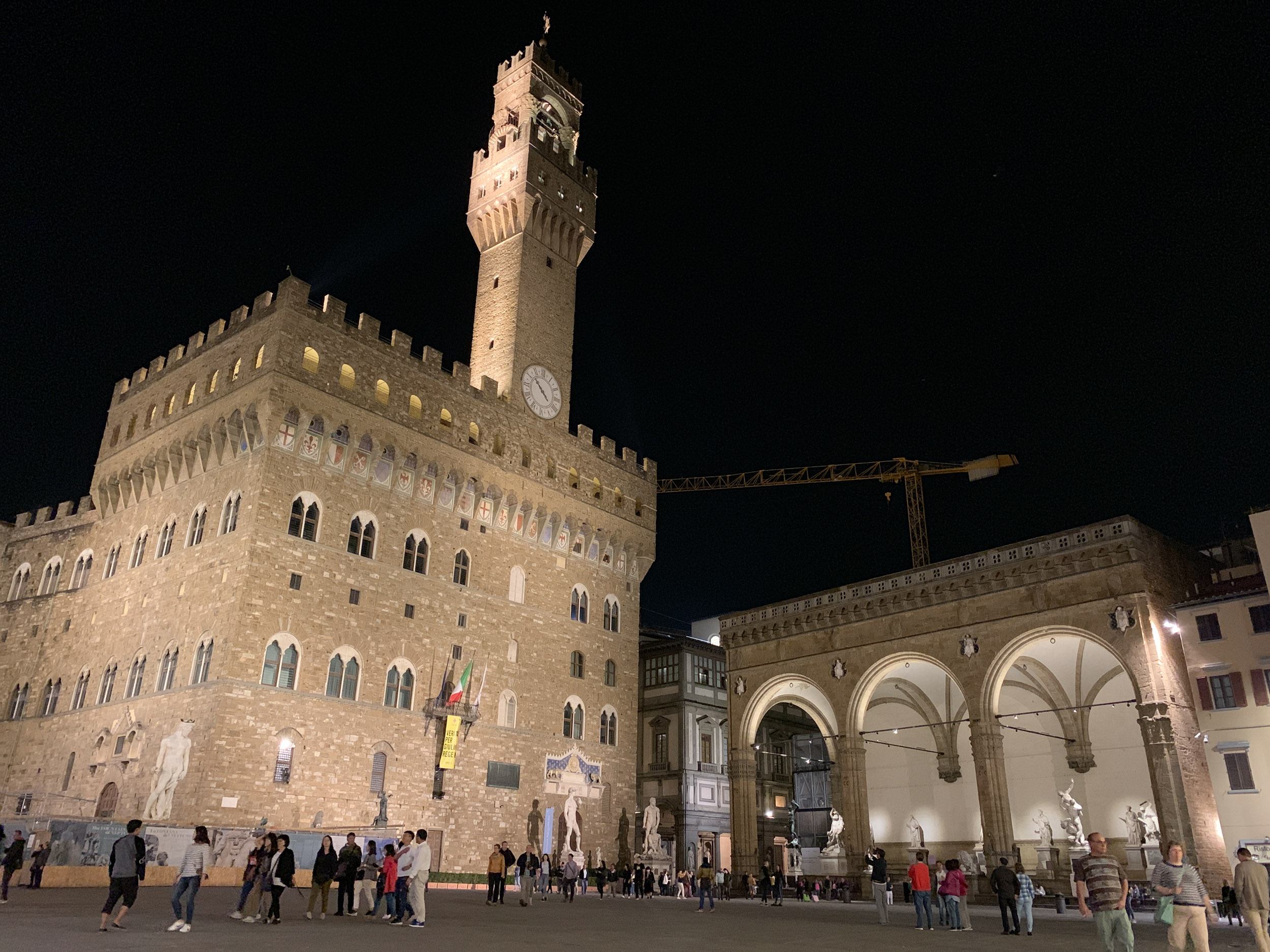 In addition to visiting Florence in shoulder seasons, like spring and fall, walking around at night is another good way to see the historical landmarks without the crush of tour groups. I was reminded of this walking back to my room after dinner my second night.

The Palazzo Vecchio (“old palace”) was the former town hall for the city of Florence. It overlooks the Piazza della Signoria, which features a copy of Michelangelo's famous David statue.

The basis for the sculpture is the biblical hero David, which happens to be the same inspiration for my first name.

Since 1873, the original sculpture by Michelangelo has been housed in the Accademia Gallery. I paid to see it my first time in Florence, and therefore was happy to just re-visit the replica.

Travel Tips: Plan ahead with a skip-the-line ticket for the Palazzo Vecchio and a timed entrance ticket to see the original David. 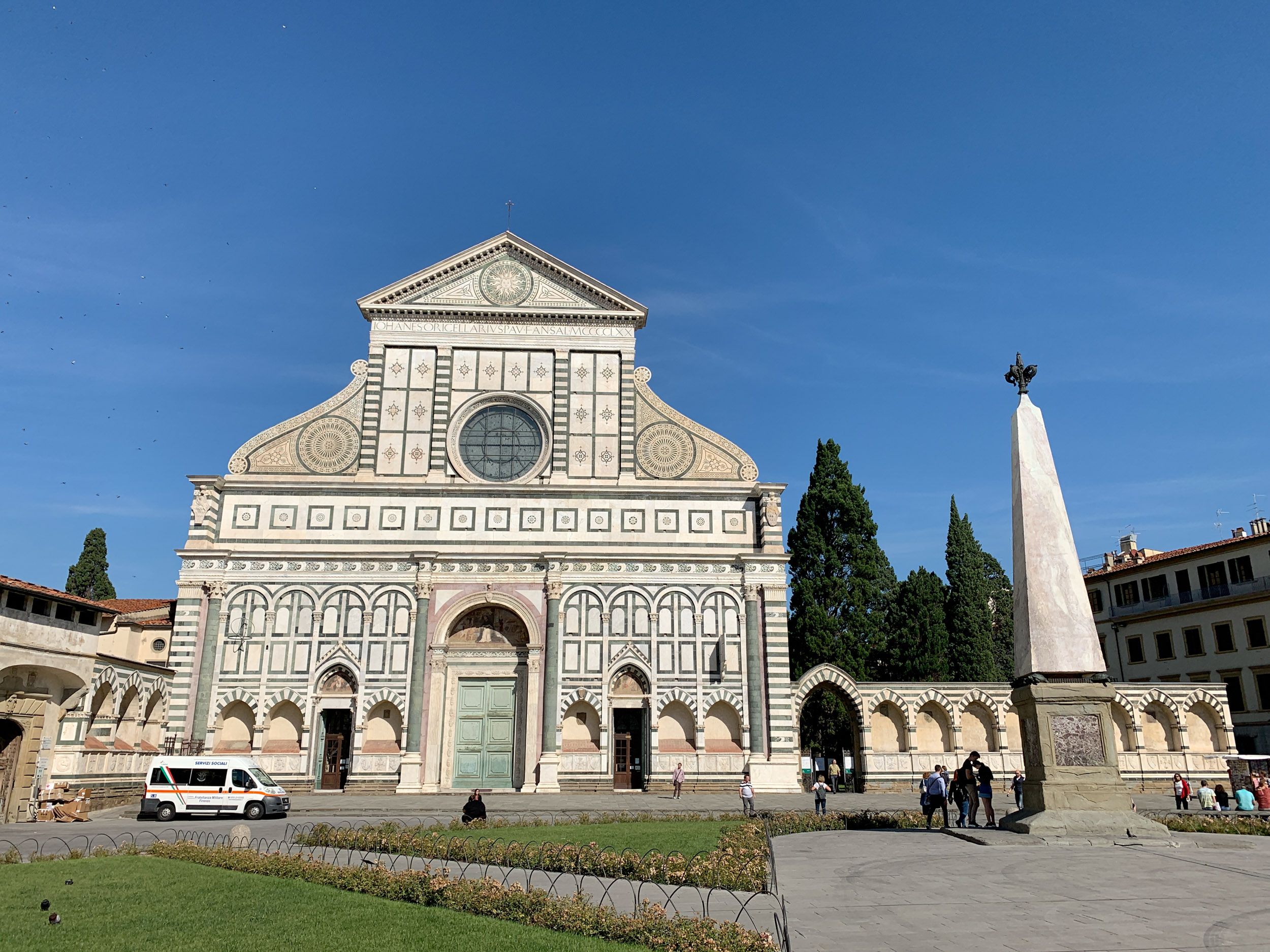 Far smaller in size and scale than the Duomo, 15th century Santa Maria Novella always stuck with me as another gorgeous church facade in Italy.

Most travelers arriving or departing by train will pass by Santa Maria Novella given its proximity to the station.

I clearly remember walking through the church's plaza 20 years earlier with my friends when we first arrived in the city. 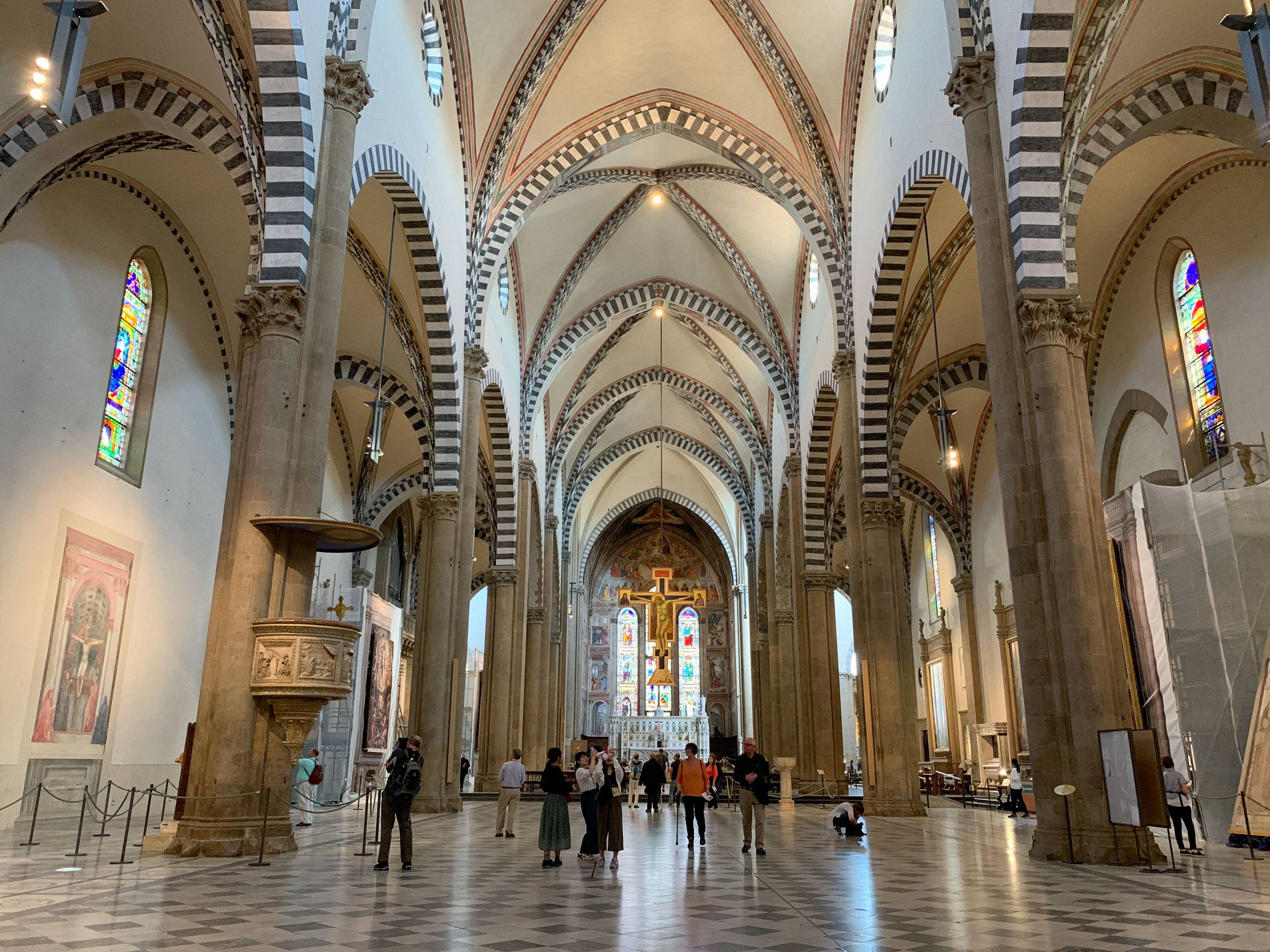 The nave in Santa Maria Novella

If you went to see the Duomo first, then the simple interior of Santa Maria Novella will seem plain by comparison.

However, there are some incredible works of art that make the $6 (€5) price of admission worthwhile. 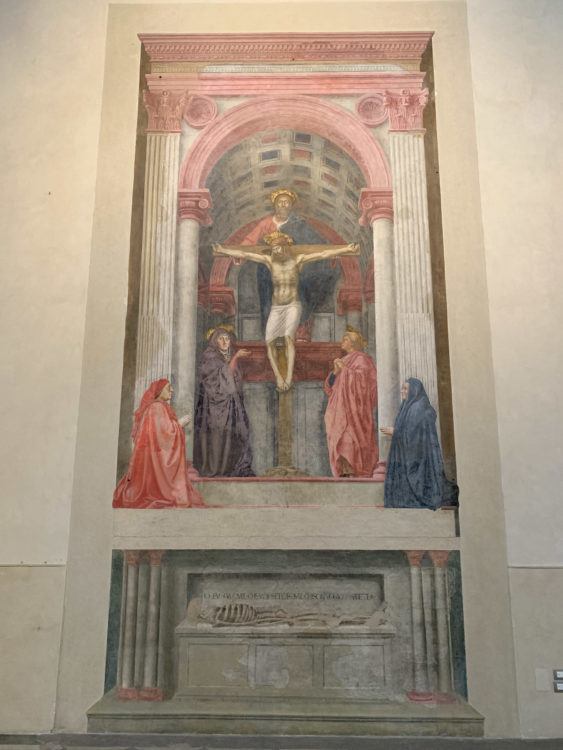 The Holy Trinity by Masaccio

One of my favorite works from the Italian Renaissance is Masaccio's Holy Trinity, which is historically significant for his use of perspective. Aside from the Duomo, I was most excited to see this fresco again.

The inscription above the skeleton, a representation of Adam, at the bottom states “I was once what you are, and what I am you will become.”

An ancient reminder for us to live every day to the fullest as we all share a common fate in death. 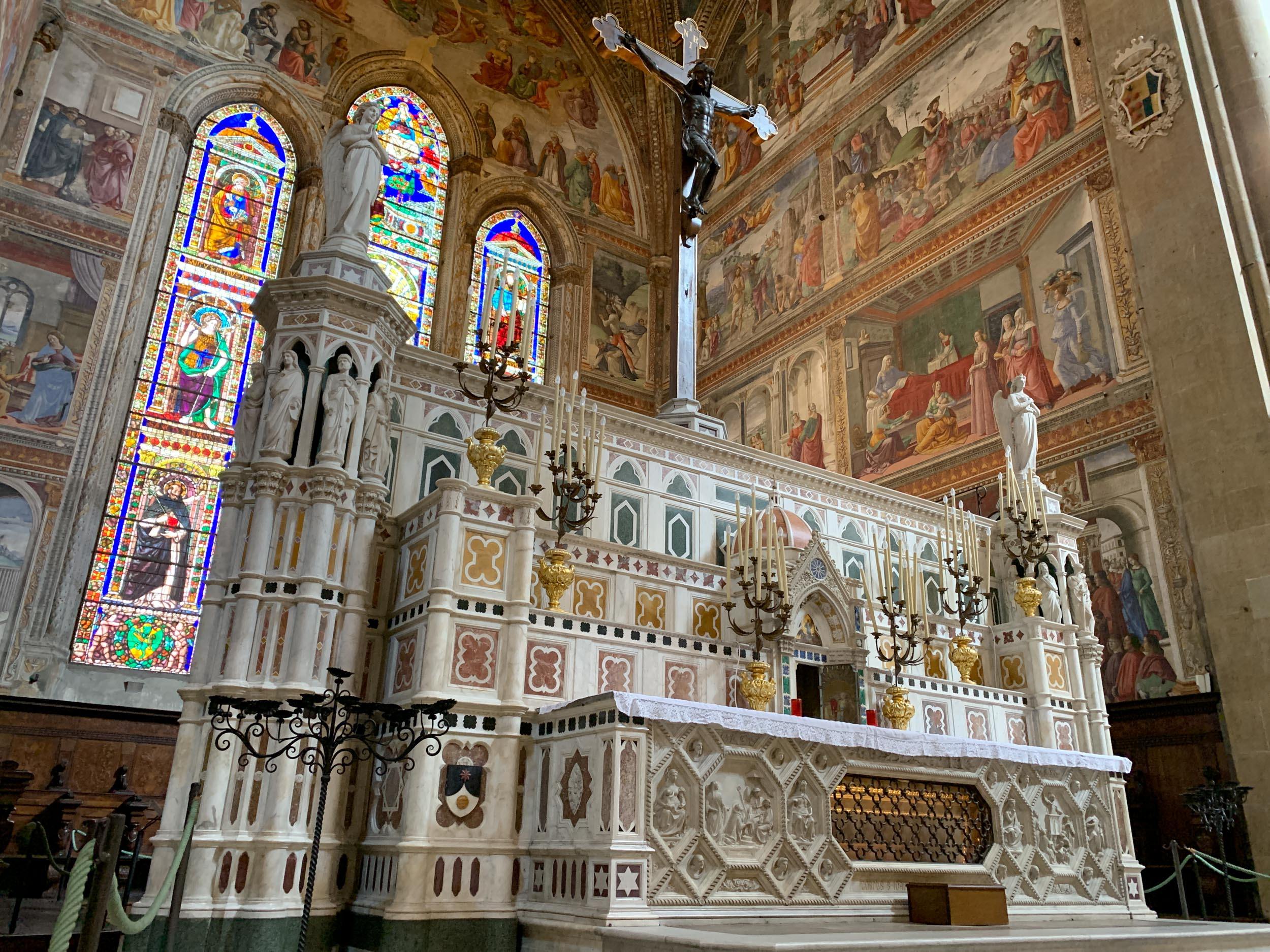 And then there's the incredible pulpit, designed by Filippo Brunelleschi (the same guy who designed the Florence Cathedral's expansive dome).

Travel Tip: Go beyond the church's interior and take a stroll through the outdoor crypt and covered arcades of the adjacent cloister. 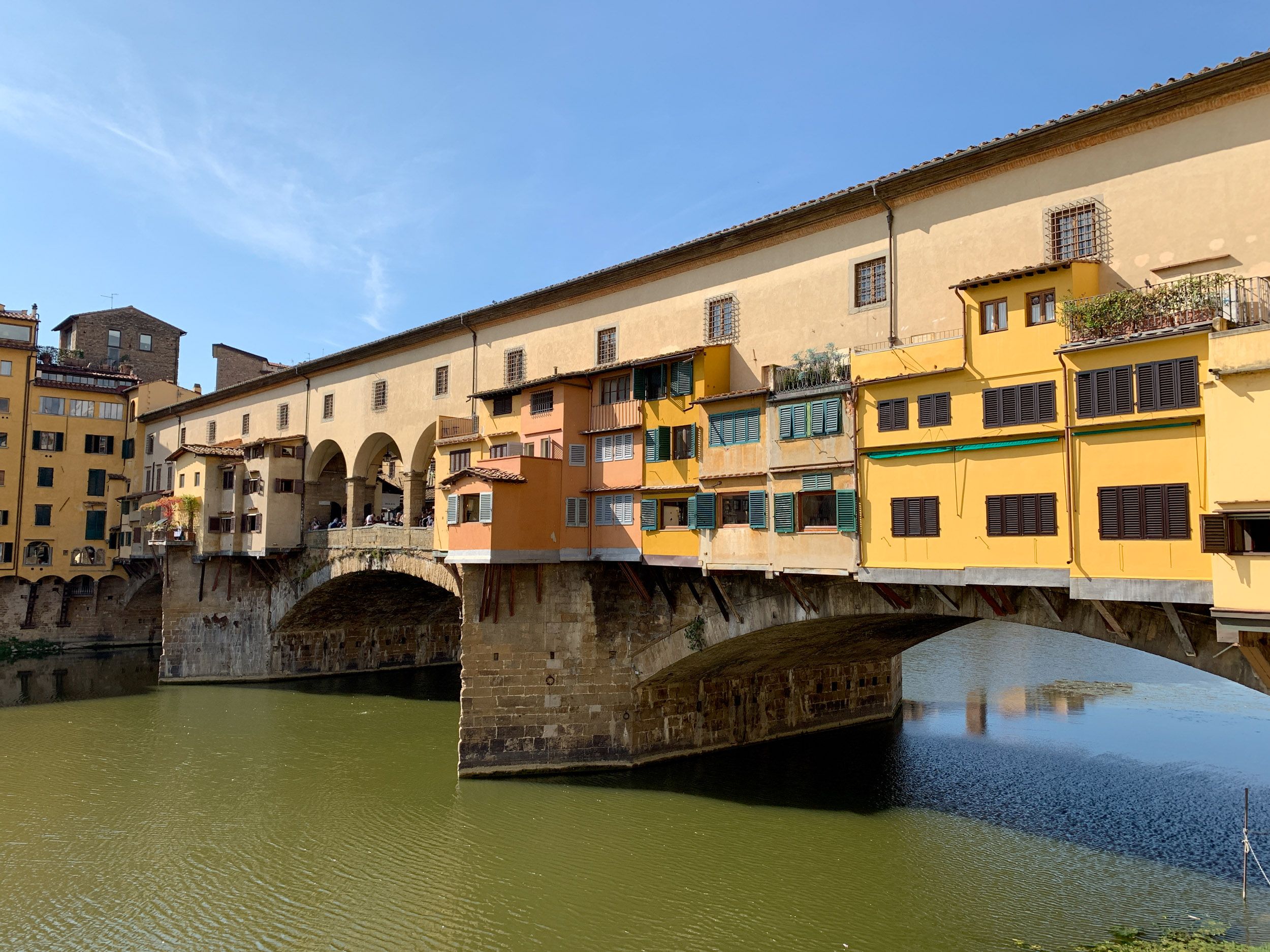 A bridge has been here in one form or another for over 1,000 years, though floods and wars have caused damage to various versions through the centuries.

What makes the bridge so interesting is that it's lined with shops, something that was more common in the past.

Travel Tip: The bridge is narrow, so it can be hard to enjoy walking across it during the day. Go at night to avoid the crowds. Musicians often perform on the bridge. When I walked across it one night, tourists were dancing in the street.

A stone's throw east of the Ponte Vecchio is the Uffizi Gallery, one of the largest and most important museums in the world. The Uffizi is to Italy as the Louvre is to France.

In 2016, two million people visited to see priceless works of art from the Italian Renaissance, including Botticelli's famous Birth of Venus.

The museum was initially created when the Medici family, who long ruled over Florence, began dying out. Initial art was donated to the city from their private collections.

Travel Tip: Avoid long lines, which can last for hours, with a timed entrance ticket to the Uffizi Gallery. 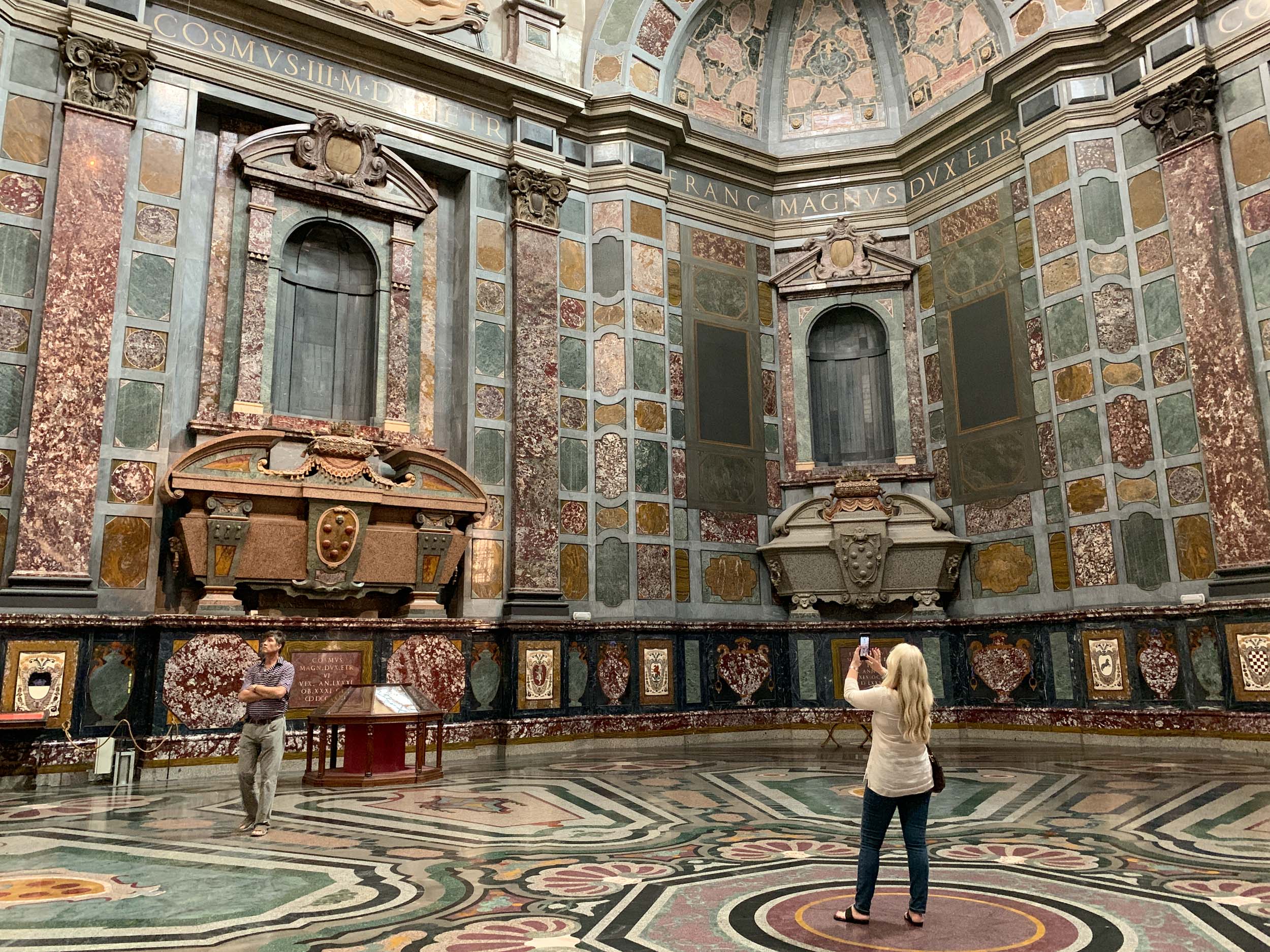 Speaking of the Medicis, this powerful Florentine banking family were critical to the artists working during the Italian Renaissance in that they commissioned many important works, and even supported Galileo, the famous Italian astronomer.

They knew how to build themselves an incredible chapel, too. 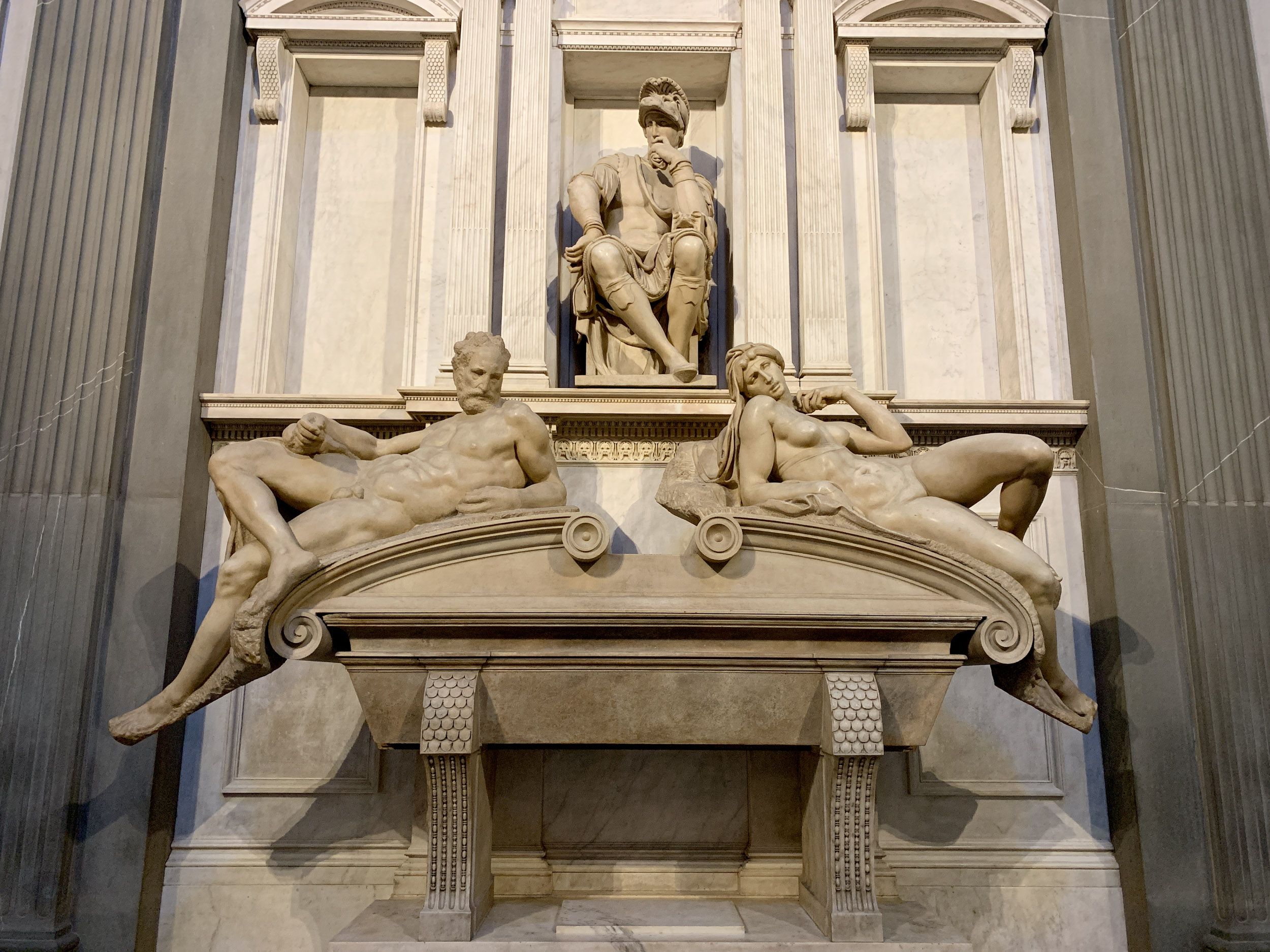 The Medici Chapel was even more stunning than I remembered it, especially when you look up to see the painted dome.

I didn't recall seeing the tombs 20 years ago, so I was happy to see them this time.

Lorenzo's tomb (above) is another example of Michelangelo's work.

Florence is one of the most visited cities in Italy, and therefore full of hostels, guest houses, B&B's, and hotels.

The closer you are to the historic center, the higher the cost.

Due to the city's popularity, book ahead of time to have a shot at the best-rated hostels. Below are a few recommendations from Hostelworld:

It is always incredible to look back on those seemingly small decisions to realizr how they can actually shift your life! Thanks for sharing your renewed perspective on a repeat trip to the same destination!

Thanks Heather! It's interesting to arrive at middle age and have a significant amount of time as an adult to look back on. Also, how did the last 20 years go by so quick!? :)