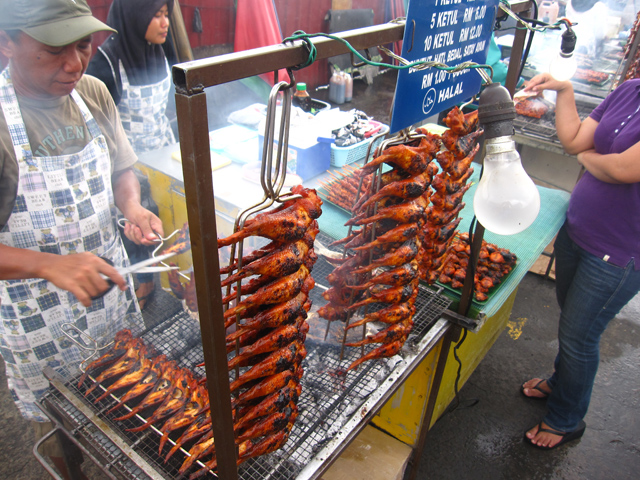 Visiting markets, especially local food markets, is one of the most insightful activities one can do when traveling, and you can do it while staying at one of the Kota Kinabalu cheap hotels.

It reveals the local side of a culture, the way people eat, and the many flavors and cooking styles.

Markets are the life and blood of a city, and while clothing markets are interesting too, the necessity of eating as an everyday event makes food markets busier and more important on a daily scale. 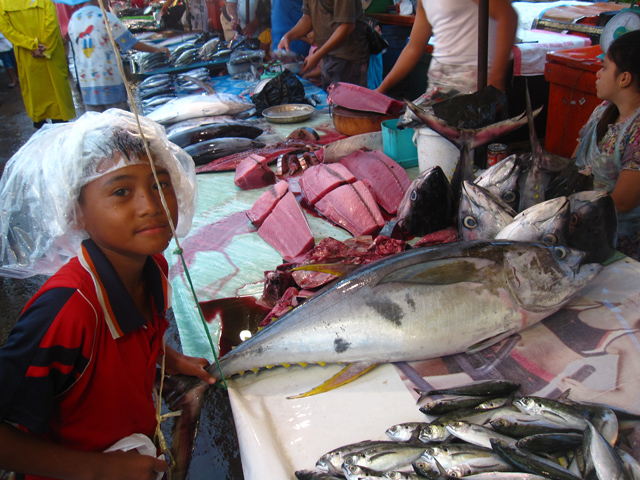 Located on the majestic island of Borneo in the state of Sabah, Malaysia, is the city of Kota Kinabalu.

After traveling Southeast Asia for years, I still think that the island of Borneo is one of the most fertile and naturally blessed places in the world – everything looks fresher, bigger and more luscious in Borneo.

Bananas are plump, vegetables are powerfully colorful, the fruit is intensely sweet, and the seafood is on the next level of beauty. Just walking through the markets filled with fresh ingredients (nothing even cooked) was enough to make my mouth water. 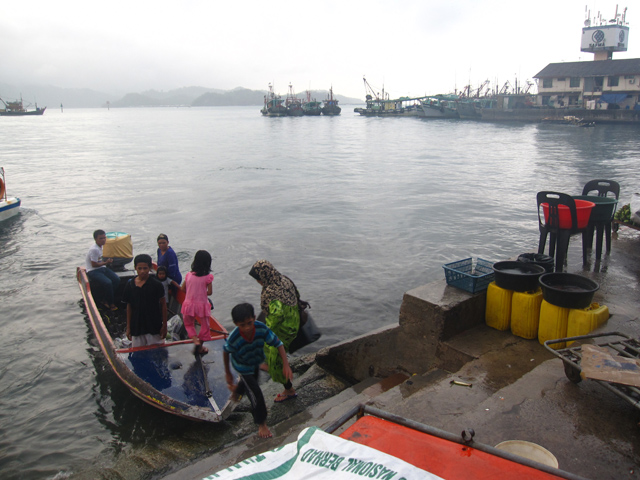 The night market in Kota Kinabalu, which sets up at around 5 pm or so in the evening adjacent to the Filipino Market, is easily one of the best markets I've ever visited.

It's similar to the Zanzibar night market, but larger with even more food.

It was such an amazing place that I actually would wait around in my guest house all day doing little but waiting for the late afternoon to arrive.

The atmosphere was incredible, and though the market was buzzing with action, it was an island style action – not the aggressive kind of market action that you experience in big cities.

Speed boats would zoom to the edge of the market dropping off a boat full of people while energetic kids would strip down to their undies to take dip.

The sunsets over the calm ocean of Kota Kinabalu were breathtaking. 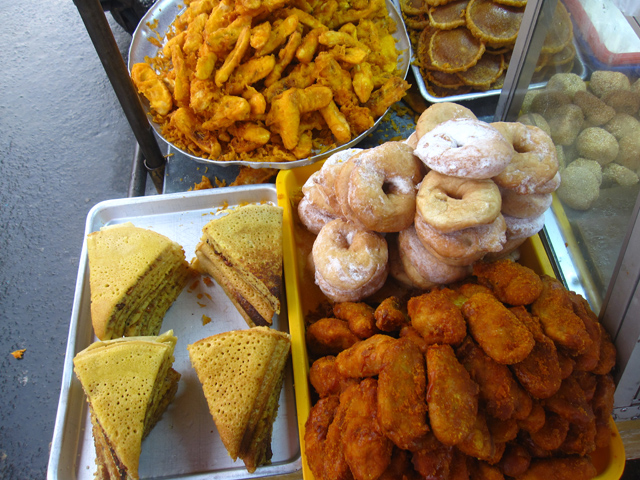 Though I had visited Kota Kinabalu as an access city to climb Mount Kinabalu, I had a truly memorable time in the city mainly due to the exquisite night market.

Starting in the late afternoon, an abundance of snacks began to emerge.

After showing up at the market each evening at about 5 pm, I would proceed to purchase a few snacks and then watch the sunset and observe the market until dark. 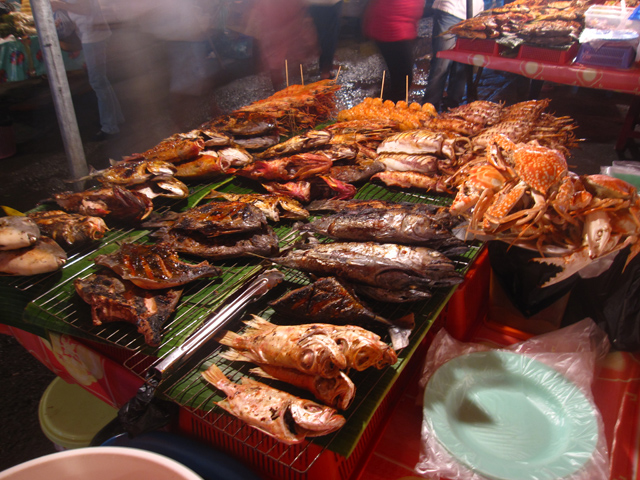 A beautiful mess of grilled seafood

When the sun had dispersed I would then browse and contemplate my dinner options.

Rather than handle the near-impossible task of choosing just one thing, I instead chose to eat several meals each night. 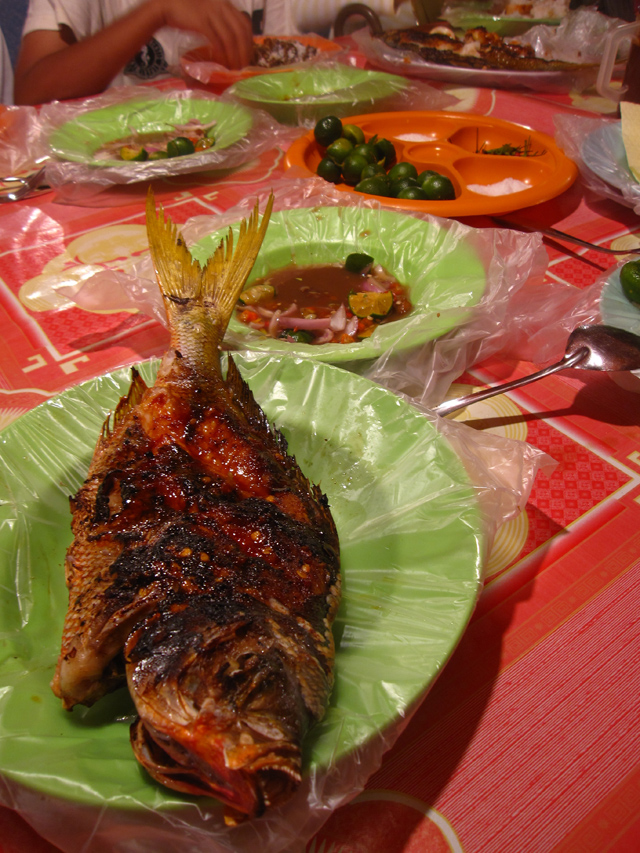 This fish was the definition of delicious, so good that I ate the same fish from the same smiling lady three nights in a row.

Marinated in a tangy sauce and grilled to perfection, the white flesh was flaky, moist, and flavorful.

The accompanying sauce was a communal bucket on the table packed full of red onions, chopped chilies, and squeezed calamansi juice (a cross between a lime and an orange). 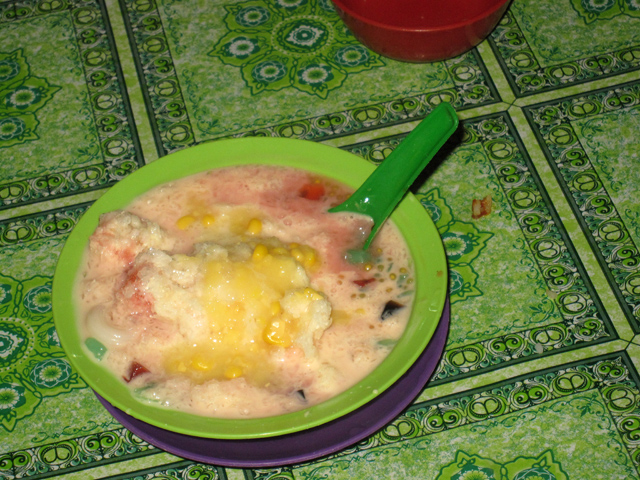 There was no skipping dessert in such a food paradise either.

Though the photo doesn't do this bowl of sweet soupy shaved ice justice, I can assure you, it was refreshing and soothing.

“Ais kacang,” referred to as an ABC for short, is an oddly wonderful combination of shaved ice, coconut milk, and a whole mess of random toppings.

This particular bowl included sweet corn and macaroni in the mix!

With friendly vendors, a perfect atmosphere, and a melting pot of great food, the Kota Kinabalu night market is one of greatest eating destinations in Asia.

I wouldn't mind visiting this place if i were in the area; The fish reminds me of the grilled fish I ate in the Philippines, .