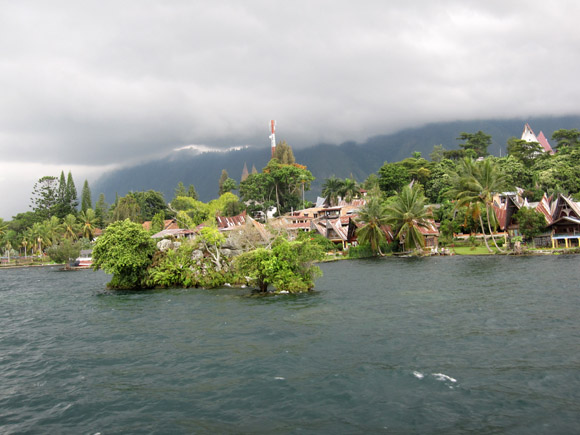 Nestled in the palms of a super volcano lies the immaculate volcanic Lake Toba (Danau Toba).  Once an explosive volcanic catastrophe zone, it's now a picturesque scene that is so peaceful and gorgeous that any initial impression is that of laziness and relaxation.  Everything from the indigenous Batak people to the glassy top of the lake, induces a slow paced  attitude and a license to clear the mind by doing as little as possible.

From the Northern Sumatran capital city of Medan, the journey to Lake Toba takes around five to six hours.  Our driver attempted to maximize the velocity of our van, overtaking freight trucks at frightening speeds and gaining air on the potholes.  Driving through the forest we eventually reached the outskirts of the main volcano and wound our way around the lake edge before arriving in the town of Parapat. 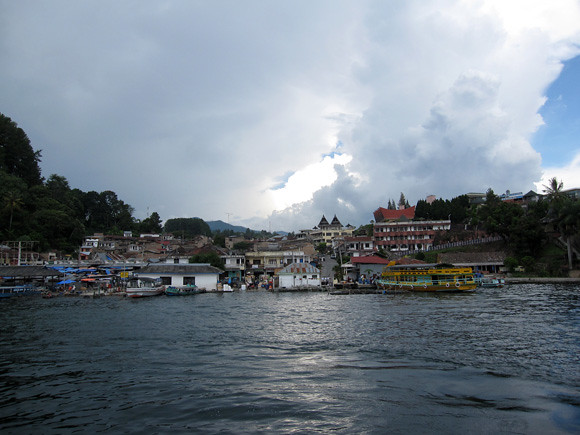 The nerve startling ride was the reverse contrast of the peaceful tranquility we were about to experience on the Samosir Island, located within Lake Toba.

From Parapat, we took the local ferry which dropped us off at our chosen guest house on Samosir Island.  The ferry was so lenient that it allowed anybody to get dropped off anywhere around the lake that they requested.  We dropped a number of people off at hotels, some locals off at their homes, a few people got out at a small water village, and finally the ferry came to a halt at our guest house.  It was like handing me a plate with a slice of heaven on it. 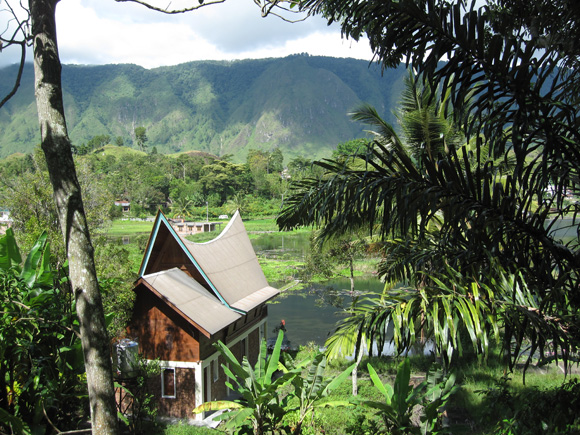 Guest houses on the banks of Lake Toba are cheap and comfortable.  Some offer traditional Batak style accommodation in huts that overlook the water.  Our room at the Reggae Guest House was filled with at least four beds and was located so close to the lake that we could jump right off our balcony into the calm warm water.

I was delighted when the reception informed us that the grand total for our noiseless Shangri-La pad was a mere $3 per night, split by 2 (and there were 4 beds in the room!).  I couldn't help myself from dreaming about spending the rest of my life in that very spot, on the side of Lake Toba.  I would relax my life away, willing to see my bank account deplete, but here, by a micro drop in the bucket per month.  My dreams shattered when I remembered my Indonesian visa that was about to expire, depleting my stay to only a few days. 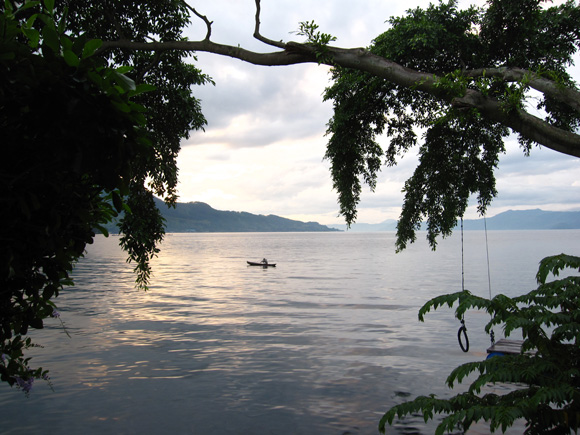 In the few days on Lake Toba I was able to truly appreciate the relaxing and tranquil nature of the area.  I would awaken at dawn to observe the sunrise that ever so slowly rose above the volcano ledges and ricocheted off the mirror of the lake.

A few lone fishermen would be casting their nets without making even the slightest sound, paddling their boats with silent strokes.  The faint pleasing sound of bird chirping could be heard, but it was almost impossible to pinpoint as the sounds carried across the landscape.

For exercise we followed the trail to the mountain top of Samosir Island, whacking our way through thick brush and being rewarded with jaw dropping views of the lake.  Along the trail we met a few Batak farmers, excited to see us and happy we had made the ascent.

Submersed by the peaceful atmosphere (just like on Mount Taal), it's a sobering thought that Lake Toba is the product of a violent blast of a super volcano.  Today it remains as the world's largest volcanic lake at over 100 kilometers long.

Getting to central Sumatra and finally arriving to Lake Toba can be challenging to arrange, but the relaxing reward is unparalleled.  Lake Toba remains one of my all time favorite destinations in the world!

i'm heading there in a few days. Hopefully Reggae is still around because it sounds perfect!

I was in Lake Toba in 2000 and then again in 2003. It is absolutely my favorite place in the world. It transformed my life in so many ways. I was on a three month trip to S. E. Asia and though I found many great chill and beautiful places none of them quite held the same magic as did Lake Toba. I meant to go there to meet up with some friends but missed them by a few days, but I "got stuck" there, meaning I fell in love with the place, the people, the lifestyle. I often wonder if I should not have at the time just bought a house and lived there forever. If you go to Sumatra leave enough time to stay in Lake Toba at least 5 days - you will achieve a feeling of utter happiness as I did and, as the author points out, it is ridiculously cheap so there is no reason not to stay there. The weather is always the same year round - between 85 and 90 degrees Farenheit, with a beautiful calm clean lake to swim in surrounded by beautiful scenery, no motorboats or jet skis, just the ferry boats which arrive periodically to give rhythm to the day. Don't stay in Parapat, which is noisy and not nearly as nice as Tuk Tuk, which is where the most tourists stay, but there is always room even on holidays. You can go here also during Ramadan since most people in Lake Toba are animist Batak people with a bit of Christian mixed in. Remember the greeting "HORAS!" which all the Batak people will great you with whereever you go on Samosir Island. Oh I miss it so much! I will must back again and soon....

If you go through Medan you must also save 3 or more days to go to Bukit Lawang to see the orang utan sanctuary, which is positively incredible for utterly different reasons. To see this great ape in it's natural environment is something truly once in a lifetime experience. Unfortunately the second time I went to Sumatra Bukit Lawang had been destroyed 2 months earlier by an enormous flash flood which killed 200 people and the area was too devastated to support tourism (obviously) but from what I understand it has been restored (this was 10 years ago or more).

hi mark, thanks for share about Toba lake. hopely tourist will be touch and gonna going there:).

I am planning to go to Lake Toba with my parent, they are not young anymore and i'm afraid it will be too exhausting and hot for them, what do you think? I really want to go there, my friend who just came back told me briefly bout her trip and it does seem like a nice place to relax.

I had been to Lake Toba 15 years back. Reading this travelog I feel very nostalgic to visit the place once again. It is a worth visiting place not only for backpackers but for for any one who likes nature at its best.