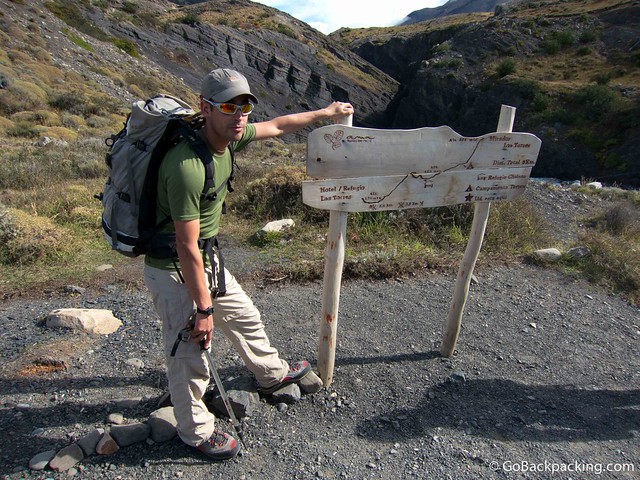 [I] recently introduced the world to Nadia, our G Adventures guide in Buenos Aires.

However, it was Christian, a Chilean mountain guide, who'd take us through Patagonia.

He was waiting for us when we arrived at the airport in El Calafate, and would be with us until our flight from Ushuaia back to Buenos Aires began to board.

Initially, I thought I would sit down with him at some point during the trip to ask a bunch of questions for this article.

But, I soon discovered that as the days went by, myself and everyone else peppered him with more questions than any single interview could include.

Over the course of our jaunt through Patagonia, we got to know Christian pretty well, and in turn, I believe he got to know us.

He'd been leading group tours through the region for 6 seasons. When not working in Patagonia during the Summer, he was a snowboard instructor in the mountains around Santiago.

Of course we asked him about his experiences leading other groups. For example, we learned he once saved a client's life by performing the Heimlich Maneuver on her after she began choking in a restaurant.

He joked that she would then go on to give him the biggest tip of his career. 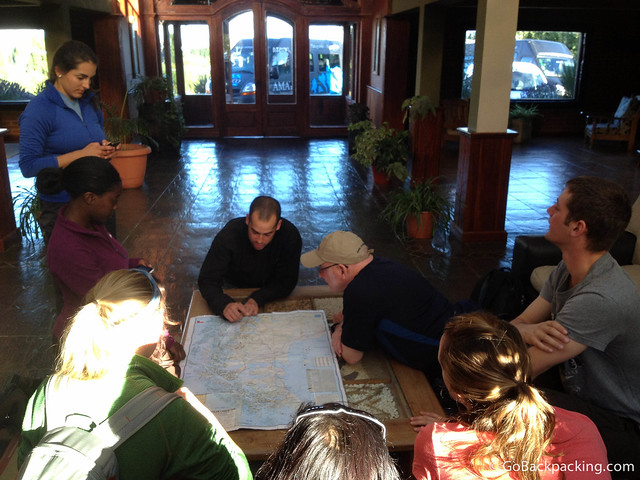 Christian briefs us before we leave El Calafate

Throughout the trip, he was always there to brief us on where we were going next, and what, if any, special equipment or arrangements we'd need to make in advance.

When we set off to go ice climbing on Viedma Glacier, Christian got some rock climbing in during his down time away from the group.

Almost every night, he'd join us for a big dinner. And the restaurants he lead us to were always excellent.

The post I wrote about food in Patagonia is the result of all those recommendations. 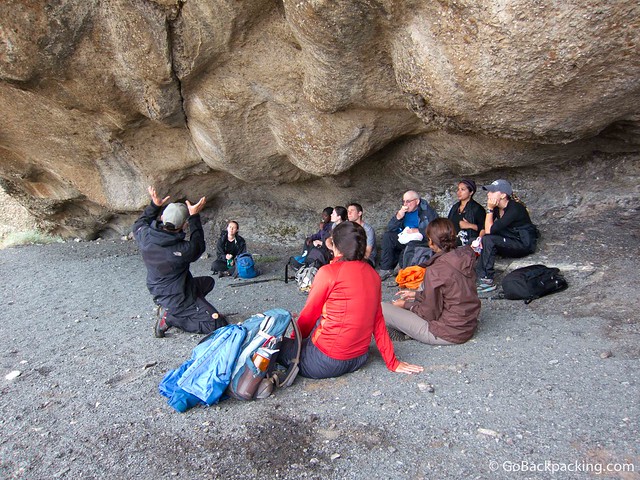 It was during our time in Torres del Paine National Park that he seemed most in his element.

Decked out in Mountain Hardwear gear, which was clearly one of his favorite brands, he lead us up to the Three Towers on the first day.

While we were up there, he shared the history of those who'd climbed the various granite peaks.

And he mentioned his desire to climb the North Tower (2,260 meters), an expedition he was going to plan and undertake within days of finishing our tour.

He said it'd take a minimum of 20 hours. When I heard that, while looking up at the peak, I immediately began praying for his safety!

As it turned out, he was called upon to lead another tour group after us, thus delaying his plans. I hope to catch up with him and find out what happened when I pass through Santiago next weekend. 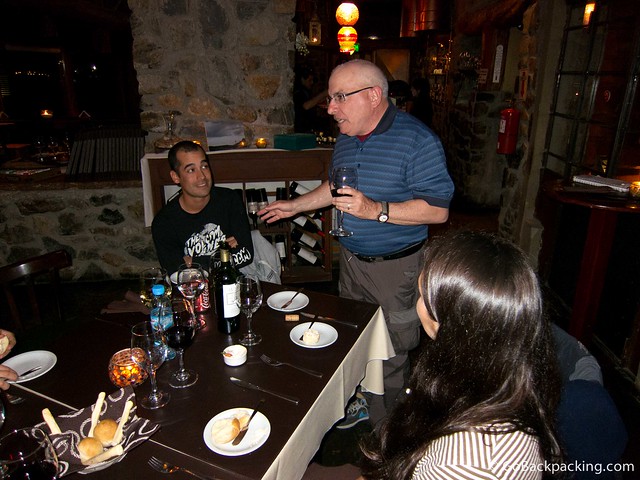 Dennis makes a toast to Christian at our last dinner together

One of the reasons I appreciate group tours, aside from their efficiencies, is the customers' ability to rely on others if something goes wrong.

In our case, we arrived in Punta Arena during historic floods. The hotel we were suppose to stay at, which we'd been told was the nicest of the trip, was under water.

The flooding was so bad, the bus had to drop us off on the outskirts of town, in the pouring rain.

Christian lead us to a large shopping mall, where we were able to grab some lunch and kill some time, before alternate plans could be made.

A few hours later, we all took taxis to a comfortable Bed and Breakfast for the night.

He broke the bad news to us that we'd be missing the visit to the nearby penguin colony, but then went on to say we'd be able to see penguins in Ushuaia instead.

By the next day, the rains let up, the river was going back down, and we were back on track.

I'd like to extend a big “thank you” to Christian, once again, for his patience and leadership on our trip to the end of the Earth.

Disclosure: This Patagonia tour was in partnership with G Adventures. Any opinions expressed are entirely my own.

Tammy on the move

I'd love to go to Patagonia. It looks so peaceful (when it is not raining anyway). I am with you on the organized tours. As much as I love my independence and not being stuck with the same people all the time, I like the fact that organized tours you don't have to worry about queuing up to get tickets or negotiate prices with the locals. You can also make friends. We met an Australian couple on a tour through Argentina and Brazil 5 years ago and we are still friends with them now.