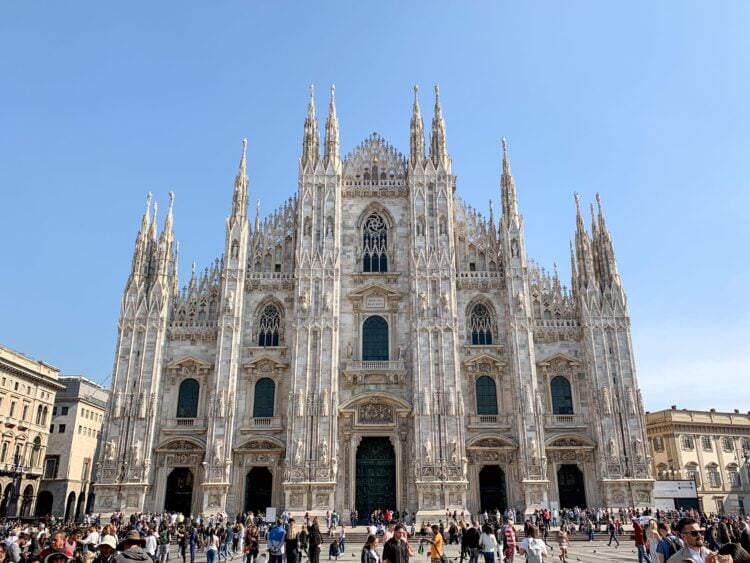 “One day in Milan is enough,” my Italian Airbnb host shared, as I peppered her with questions upon check-in.

I was excited to hit the ground running having spent the last two days at airports and up in the air with Norwegian Air and another budget carrier.

It was a friend's wife who'd given Milan a positive plug when I mentioned I was heading back to Italy for the fourth time. She'd studied there when she was younger.

At a minimum, I knew Milan's cathedral was one of the largest in the world, and so with a personal recommendation and a UNESCO World Heritage Site to visit, I gave myself a few nights in Italy's fashion capital before continuing to Florence, Tuscany, and Bologna.

Due to jetlag, I ended up needing two days to see what I mentioned in this article. However, I'm confident travelers already in the region can comfortably see everything in a single day.

The historic area is walkable, however, to get there, you'll likely want to take the metro train as most hostels and budget accommodation are outside the center.

If you plan to stay further away or explore the surrounding region, you may want to consider renting a car in Milan.

The easiest place to start your day is the “Duomo” station on the #1 red line. 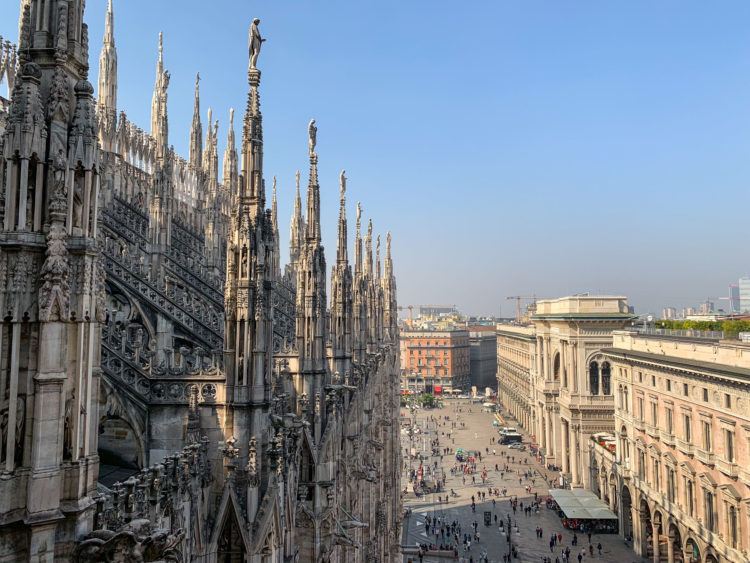 View from the roof of Milan's cathedral

The Milan Cathedral, or Duomo for short, is the symbol of the city.

Construction on Italy's largest cathedral began in 1386, and it wasn't completed until 1965, nearly 600 years later.

Isn't St. Peter's Basilica larger, you may be asking?

Yes, it is. However, it's located in Vatican City, which isn't technically part of Italy.

Overall, Milan Cathedral is the third largest in Europe, and the fourth largest in the world.

The view of the ornate facade from the Piazza del Duomo, the plaza in front of it, is simply stunning.

As incredible as it is to view the cathedral's exterior, the ability to walk around much of the roof is what sets Milan Cathedral apart.

Walking under the flying buttresses that hold up the building gives one a genuine appreciation for the engineering and ingenuity required to construct such structures long before the use of modern technology. 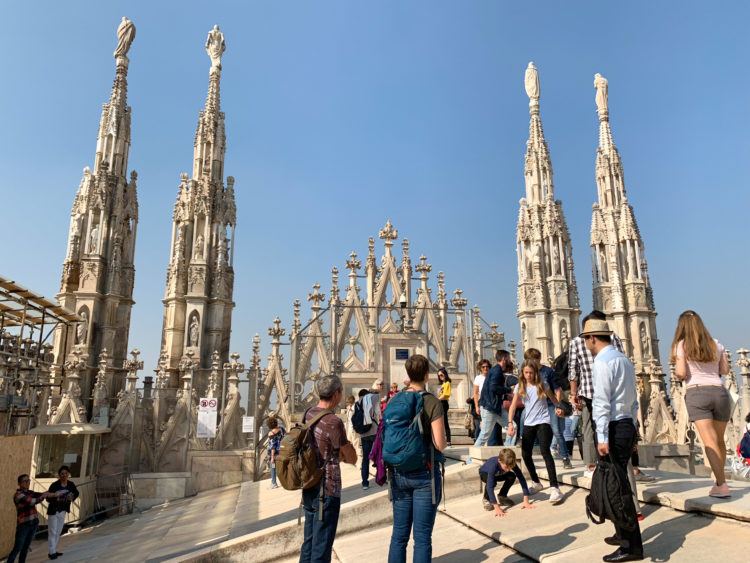 Hanging out on the rooftop

While seeing the interior of the cathedral is entirely free, I highly recommend purchasing a ticket that includes roof access (referred to as “terraces”).

As of 2018, ticket prices that include the roof are:

To save time, check out the Cathedral ticket options on Get Your Guide, some of which include guided tours.

Regardless of how you get there, once you reach the roof, you're in for an experience unlike any other as you wind your way around the perimeter.

You'll see sculptural work up close and get a sense for the level of detail the artisans and architects aimed for that's hard to appreciate from the ground. I tried to take it all in, but it's overwhelming.

My favorite moment was standing atop the nave near the front facade (pictured above).

I've visited a lot of cathedrals in Europe. I can't recall having as much space and freedom to move around atop any of them as I had at the Milan Cathedral. 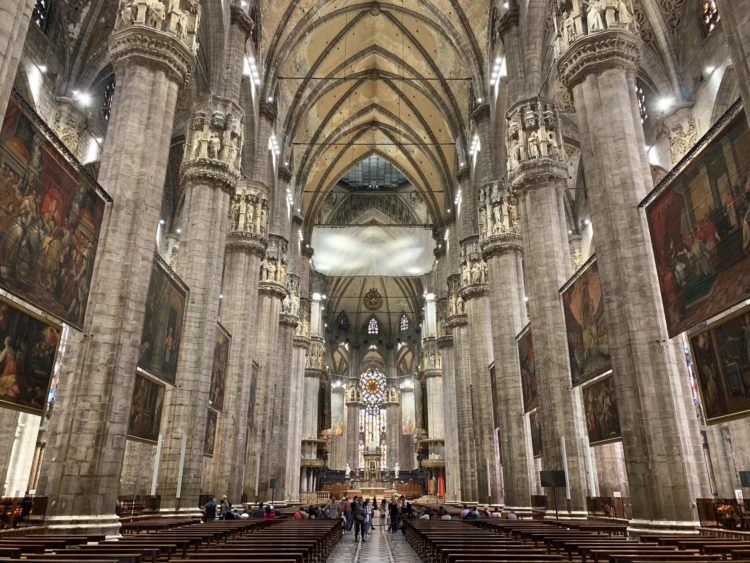 If you're like me, you'll head straight for the roof first, and walk through the interior on your way down.

The cavernous space created by the 354-foot (108m) high nave is spectacular.

Walking around, feeling mighty small amidst such soaring arches, reminded me of my visit to St. Peter's Basilica 20 years earlier.

The grandeur of such holy spaces has a way of putting our size as individuals into perspective.

The beautifully preserved stained glass windows allow plenty of natural light to enter while adding some much-needed color to the walls.

According to Wikipedia, Milan Cathedral has a 40,000 person capacity. Incredible! 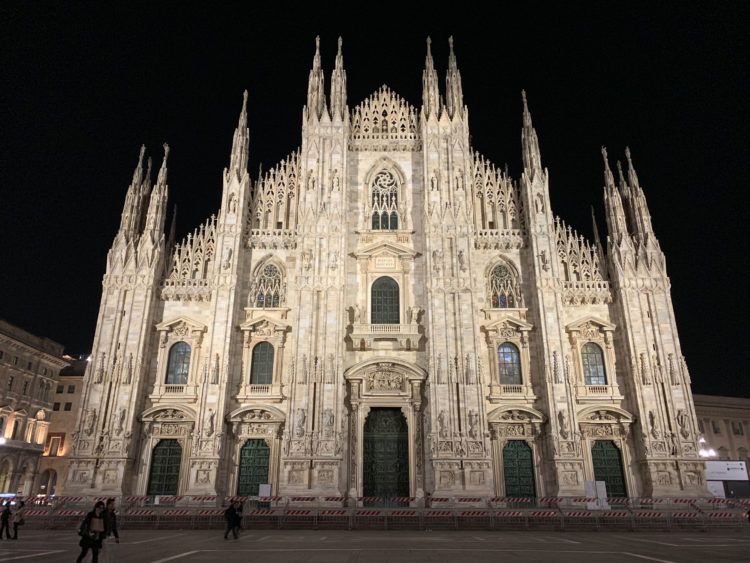 The Milan Cathedral at night

Before we move on to my other recommendations for how to spend one day in Milan, I also want to suggest stopping by the cathedral at night too.

There will be far fewer people, and you'll see the facade in a whole different light. 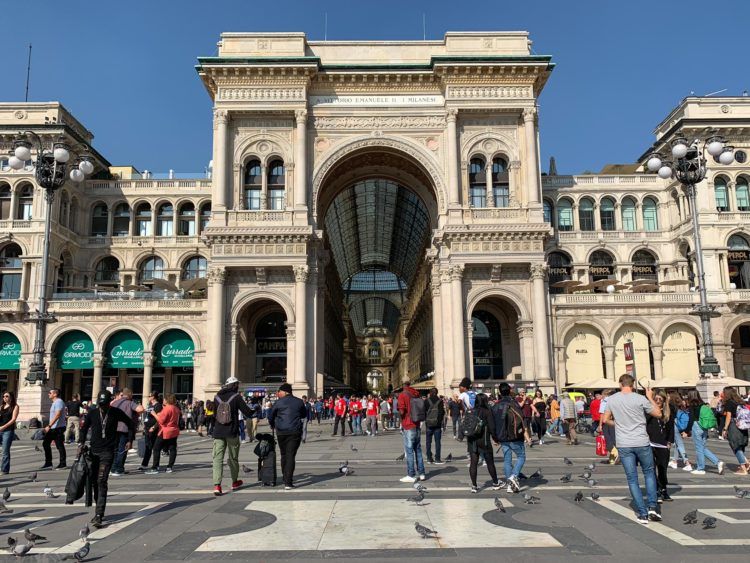 Once you've seen the cathedral, going for a quick walk through the Galleria Vittorio Emanuele II, Italy's oldest active shopping mall, is another popular thing to do.

You probably noticed the central arch when you arrived at the cathedral, as it faces the Piazza del Duomo.

“Only in Italy,” I thought, as I walked down the ornate 19th century, glass-covered arcade.

The mall is full of cafes, restaurants, and luxury shops like Louis Vuitton, as well as the mundane, including a TIM shop where you can buy a SIM card for your phone (passport required). 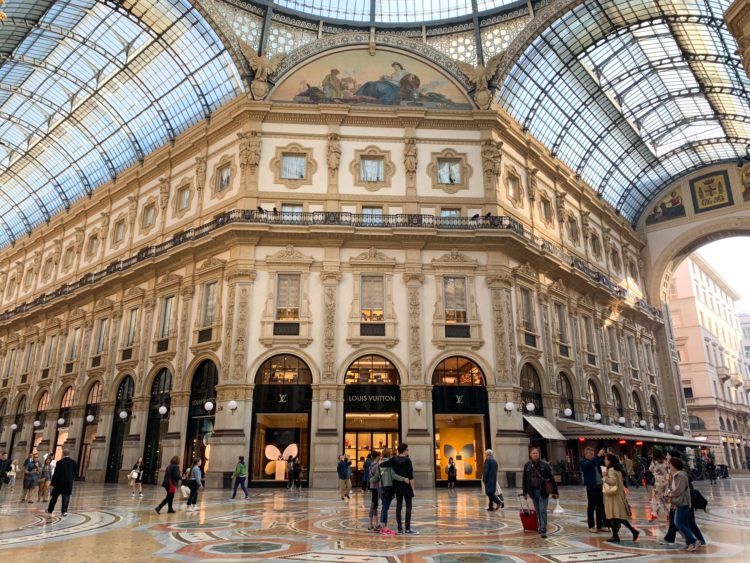 At the north end of the mall is a small park with a monument to Leonardo da Vinci which is worth a quick look.

There's also the Leonardo3 Museum dedicated to the inventions of da Vinci. However the reviews didn't look too good, so I skipped it.

Across the street from the park is the rather plain-looking Opera House. 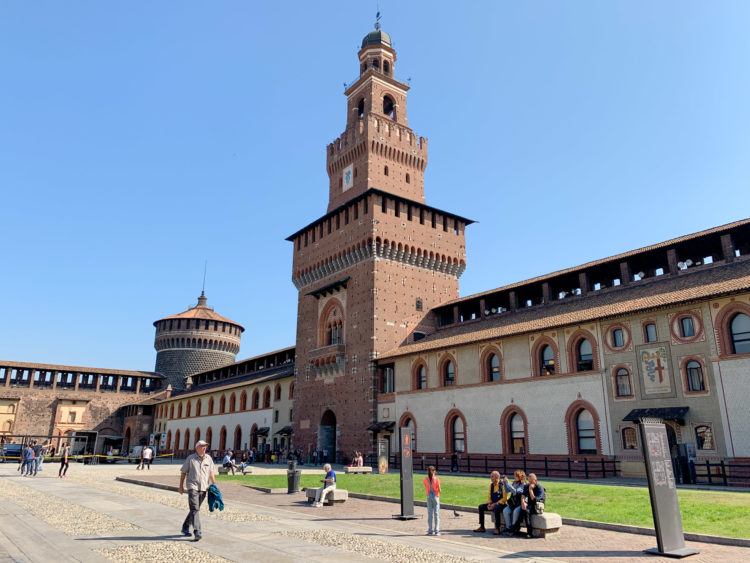 View from a courtyard inside the Sforza Castle

Adult admission is just $5.60 (€6), with free access on the first Sunday, and first and third Tuesday after 2 pm every month.

Inside the monumental walls and towers are lots of art galleries and collections. 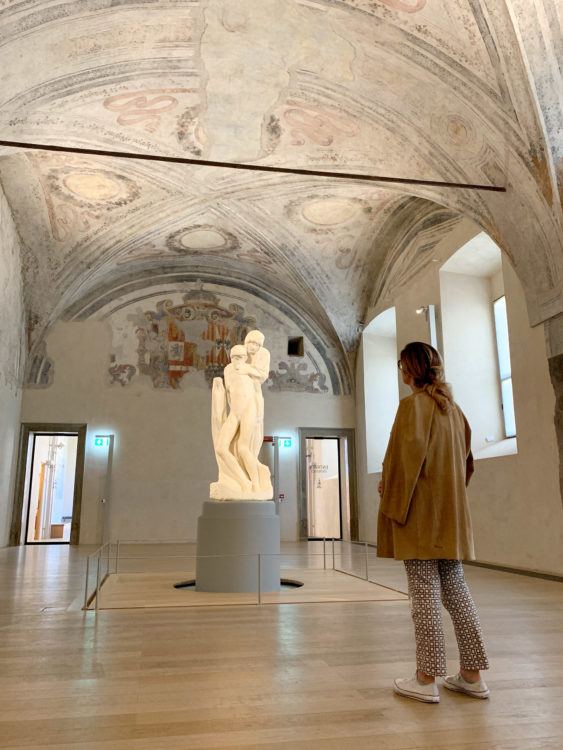 Pieta, an unfinished sculpture by Michelangelo

If you're running short on time or energy, head straight for the highlights, works by Leonardo da Vinci and Michelangelo.

Leonardo's artwork is on display in the Sala delle Asse, which is Room VIII in the Museum of Antique Art.

You can also see a painting by a student of Leonardo da Vinci (which has da Vinci's signature on the back of the canvas, dated 1515).

The second highlight is Pieta, Michelangelo's last unfinished sculpture before his death (pictured above), which depicts Jesus dying in Mary's arms.

It's a haunting work, and one worth taking the time to enjoy. Several seats are available to admire the sculpture or rest your feet. 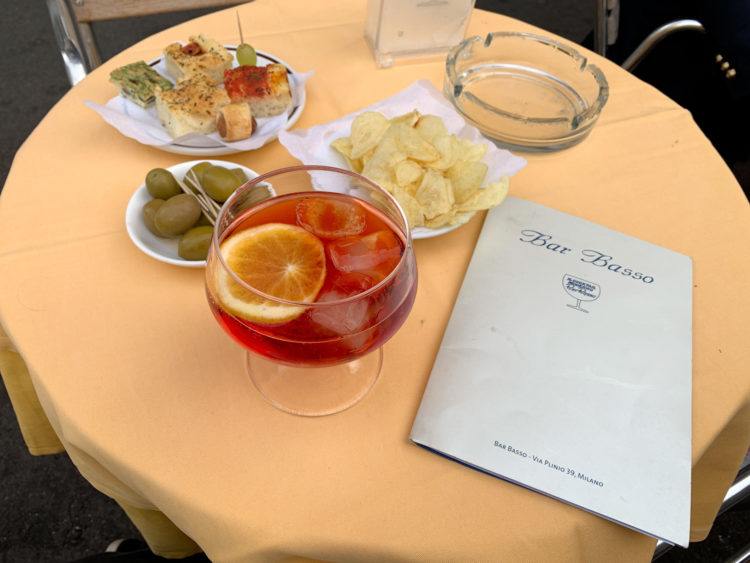 A Negroni Sbagliato at Bar Basso

End the Day with Aperitivo

When you've wrapped up sightseeing, take an hour to unwind with the Italian tradition of aperitivo in Milan, a pre-dinner drink enjoyed with light finger food.

The popular custom got its start in Milan during the 1920s and has slowly spread south over the ensuing century.

Typically from 6pm to 8pm, aperitivo is similar to happy hours in the US, only instead of drink discounts, you're likely to pay regular price for a cocktail and receive complimentary food.

The food is either brought to your table or available at a buffet.

This is an excellent time to try one of several classic Italian cocktails:

All three of the above are made using bitters, either Campari (which is originally from Milan) or Aperol.

I chose Bar Brosso (via Plinio 39) for my first aperitivo experience as it's where the Negroni Sbagliato was invented when a bartender accidentally added sparkling wine instead of gin to the Negroni he was mixing up.

The bar has been serving drinks since 1947 and currently boasts a cocktail list of more than 500 drinks!

Taking a seat on the sidewalk, I ordered their signature cocktail which was presented in a wide glass. The bitterness was a bit too much for me, and I didn't finish the drink.

A few days later, in Florence, I tried a regular Negroni and also didn't like it too much. The lighter, less bitter Aperol Spritz, on the other hand, I enjoyed.

If you have the energy, I also highly recommend checking out Nottingham Forest bar for its experimental drinks.

Bet you didn't know one of the most famous frescoes of the Italian Renaissance, The Last Supper by Leonardo da Vinci (1498), can be found in Milan. Yes, Milan!

Access to The Last Supper in the Santa Maria delle Grazie church is tightly restricted. Only 25 people are allowed in the room at a time, and for a maximum of 15 minutes. I didn't plan for it, so I missed the opportunity.

Since you can't just show up and expect to get in, booking a brief tour through a third party is your best bet.

The historic area of Milan lies at the center, and the city radiates outward in all directions.

Most hostels and budget accommodation are at least a few metro stops away. If you only have one day in Milan, consider these options.