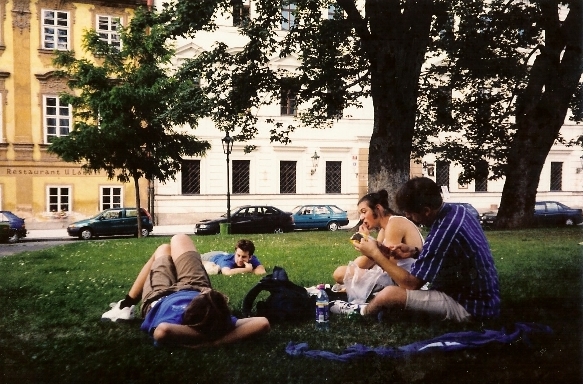 There was a guy at my college who use to say “Prague is the bomb” so often it has been eternally etched in my memory. Luckily, my experience visiting the city lived up to its billing. The following excerpts were from Sunday, July 19, 1998 to Tuesday, July 21, 1998.

Today we went to Prague Castle, a short walk from our hostel. We went to St. Vitus Cathedral, the main steeple tower (287 stairs with a great view of the city), the St. George Basilica, and the Royal Palace. We ate lunch in the green in front of the complex. Tonight I'm looking forward to checking out the night life in Prague.

Meanwhile, we emerged from the Soviet-made metro to an escalator of gigantic proportions. It was steep, fast and long. The metro cars, according to Dave, are Russian-made. This might explain their performance. These things speed along quite fast, and the doors close with a jarring force, and appear unlikely to reopen if you get stuck in them. Either way, your nuts would be squashed. Also, the metro system is only 3 lines, and extremely easy to use.

We walked around for awhile. We walked over the Charles Bridge (1,000 years old). It's amazing to think of how many generations of peddlers, artists, and tourists have been on that bridge. The view of the Royal Palace and St. Vitus Cathedral was also nice. We got dinner at a small restaurant. Again, the normally $12-plus meal was only $5. We got ice cream afterwords, at a place that also had a full bar. Even the sausage stands on the street sold small bottles of liquor. When we returned to our hostel, Dave cracked open a 1/2 liter bottle of R. Jelinek Vodka (Moravia) which we bought for $3 at the grocery store. That was also the scene of Dave accidentally breaking a $10 bottle of liquor. It was quite embarrassing. Oh yeah, back to Prague for a second. When we were in Old Town, in front of the astronomical clock (15th century), some girl (Simi) recognized Dave as Greg's brother. Ok, I opened Sam's bottle of white wine first, and it was tasty. Screwdrivers were made. 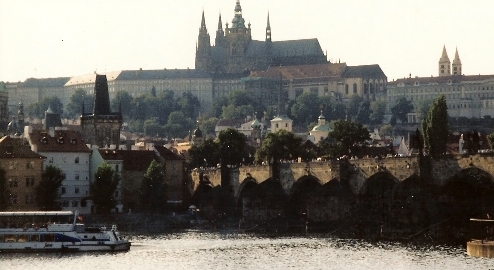 By the time we ordered our drinks at Jo's Bar, Bill was right behind us, which means he must have caught the last metro of the night. I ordered a gin and tonic hoping it would be as good as the one Eric had received a few days ago. According to him, it wasn't the same. Plus, it was twice as expensive! We went down to the third floor where there was a small dance floor with nobody on it. About 20-30 minutes later, I eased my drunken body onto the floor and started dancing more and better than ever before. Of course, it helped that I was with everyone else, and they were playing all Top 40 American hits like: Nirvana, Chumbawamba, Natalie Imbruglia, The Doors, Don McLean (American Pie), etc. We left at 3:45 AM. Bill stayed, and ended up coming back alone. The walk back seemed to be short, up to the Prague Castle, then down to our hostel. Sleep. Tomorrow, I'm hoping we go to the “Yellow Submarine” puppet show (with black lights, $14). I'd also like to see the clock chime (bones are supposed to come out), and I'd like to dance again!?

Well, we didn't do too much today: slept late, mailed postcards, played cards, and sat around. Of course we went to the supermarket. Around 11:15 PM, we finished our drinks and decided to head into Prague again. We brought along 3 guys from California who had just arrived down the hall from us.

Since Jo's was the only place we really knew, we went there again. This time, however, I managed to spend more money at the bar on 2 warm screwdrivers, a really bad gin and tonic (w/o gin it seemed), and 2 cheap beers. Apparently, Monday night was American music night because they didn't play any of that while we were there. I danced a little bit, but the prospects weren't the same, or the music. There was some (gay) guy there who started poking Eric, and later everyone in the place. Bill later reasoned that he was dealing cocaine. There were some really hot girls there but they seemed untouchable by my mortal style. Toward 1 AM, Eric, Sam, and Dave left. I decided to stay with Bill. There were two cute girls that I spotted. Often, one would leave the other. I was unable to approach either, but before we left, Bill did. They said they didn't speak English (Norwegians), which sounded like a shady excuse. There was also a girl with a red Beefeater shirt. She appeared to have a boyfriend though. The next day, she ended up taking the same train as us to Vienna. The night ended with Bill and me walking home during a thunderstorm (w/lightning). The rain was light. It felt good to take my shirt off for half the walk home (I ended up catching a bad cold/flu tonight, which I had for the next 2 weeks). 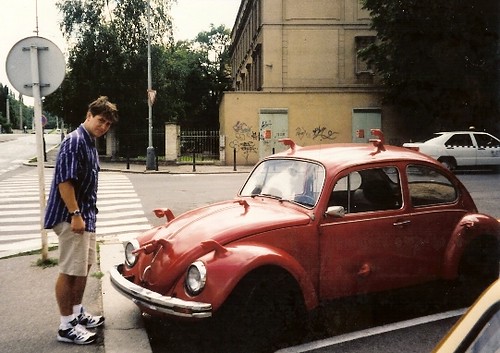 Also, today, we ate at that same Italian restaurant where I got the same meal, noodles w/ham. I also bought a weird bottle of beer which was made of whiskey and vitamin E. The label had the male/female symbols, and said “Don't drink and drive, fly.” It also said stay cool, while showing a picture of a cigarette and a snowflake. It wasn't that good.

Read more of my tales at Backpacking in Europe.