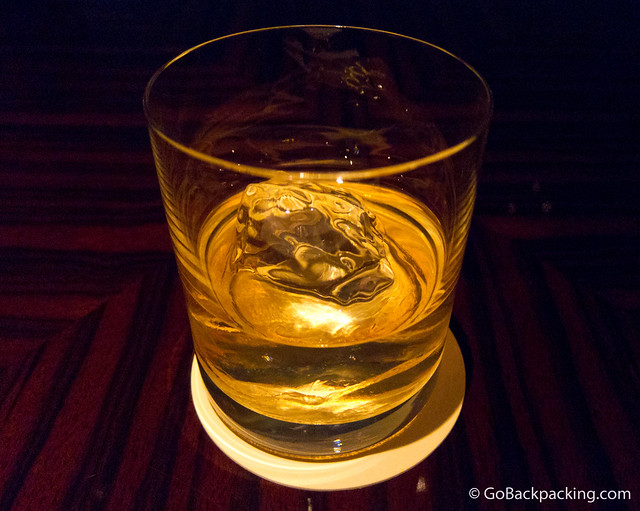 I used the long flight to Tokyo as an opportunity to re-watch a fantastic travel movie by the name of Lost in Translation (2003).

I'd seen the indie classic once before, and enjoyed it more the second time (probably because I was on the verge of experiencing the same culture shock as Bill Murray's character).

On my first night in the city, it was Kenya, my Japanese couchsurfing host, that mentioned the Park Hyatt Tokyo was where the bar scenes from the movie were filmed.  He had been there himself, saying it was a special place, and you had to take two elevators to get there. He also warned that there was a 2,000 yen cover charge ($24).

I have a tendency to go out of my way to see where movies have been shot abroad. My prior credits include:

My mission was clear: drink a whisky at the Park Hyatt Tokyo, and pick up Scarlett Johansson in the process.

After a long first day of sightseeing, I found myself in the bustling business district of of Shinjuku as evening arrived. Minutes before it closed, I picked up a local map from a tourism office and set off to find the hotel.

The Park Hyatt Tokyo is part of the Shinjuku Park Tower complex, and it took some time to figure out where I had to go; the delayed gratification only added to the adventure.  I was a tired, jetlagged man in need of a quality Japanese whisky. 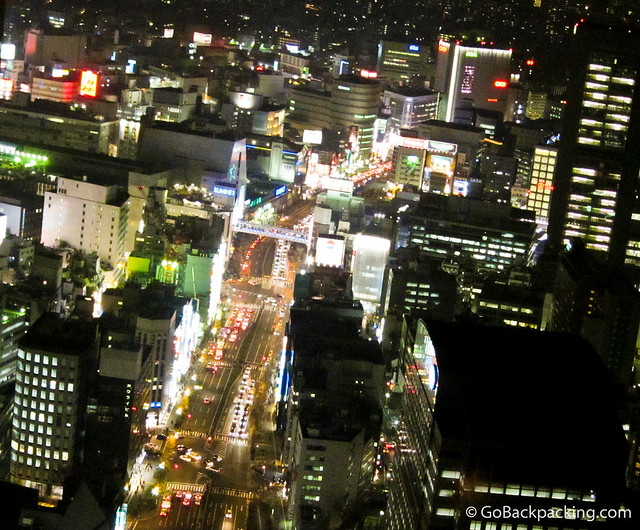 View of Shinjuku from New York Grill and Bar.

Kenya was right, of course.  To reach the New York Grill and Bar on the 52nd floor of the building required two elevators. While making the walk from one elevator to the next, I passed by two other hotel restaurants. I felt grubby passing through the corridors of a 5-star hotel wearing jeans and a hoodie, however Kenya had assured me that as long as I wasn't wearing shorts or sandals, I'd be fine.

I stepped out of the elevator on the 52nd floor at about 7 PM, and was immediately greeted by a hostess in the darkly lit entrance to the bar and restaurant.  I was also immediately greeted by a sweeping view of the city.  When I told the hostess I preferred the bar, she mentioned the cover charge of 2,000 yen for the live jazz music, but it was only levied after 8.  Serendipity strikes again.

The hostess walked me over to the bar area, with its piano set against the backdrop of large glass windows, and the long table where Bill Murray's character sat and sipped his Suntory whiskies.

It was a Thursday night, and aside from a few others in the bar, I had the place to myself. I picked a table next to the window, in the center of the room, with the piano to my left, and a direct view of the city below. It was a commanding view, and I savored the moment.  It was the third time that day I'd been to the top of a tall building to view the city, and it was by far the best. 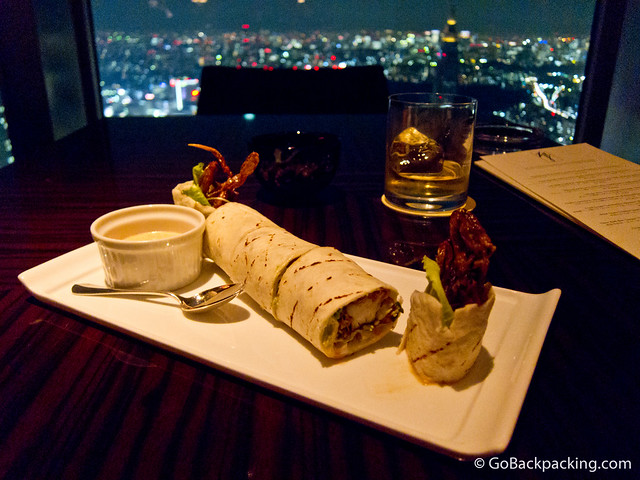 The waiter dropped off the drink and a la carte menus, and I got my first taste of Japanese fine dining.  There were at least a dozen or so brands of whisky on the menu, so I was happy he also pointed out the one used in the movie.

Suntory Hibiki whisky was the brand Bill Murray's character consumed, and thus it would be the one I would drink as well. There were three ages, with prices that conveniently matched each.  I opted for 17 years for 1,700 yen ($20).  Starving, I also ordered a soft shell crab roll.  The lobster mac ‘n cheese was a close second.

Consuming liquor straight isn't my style, however when the whisky arrived in a tumbler, chilled by one giant cube of ice, it looked as sophisticated as the bar I was sitting in. I took a sip, and found the it surprisingly smooth. I savored the drink, enjoying the flavor, and ensuring at $20 a pour, it lasted as long as I did. 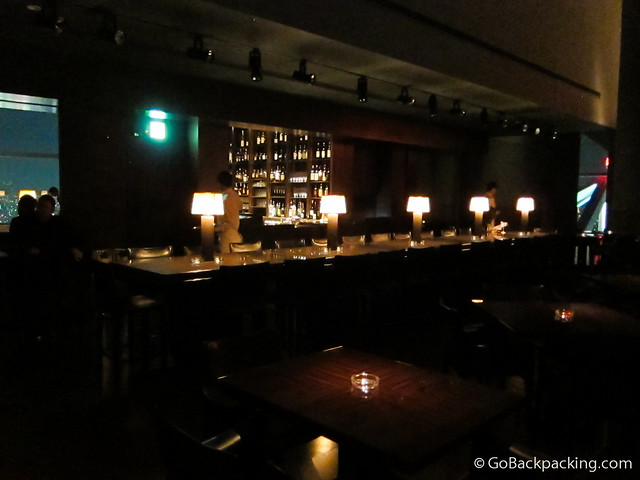 The long table in the New York Bar where Bill Murray's character sat in the movie.

Scarlett never did show up, however my bill for the experience certainly did.

Drinking fine Japanese whisky, and snacking on softshell crab in the bar of a 5-star hotel with stellar views of Tokyo was worth the $59 price tag.

But we all have our limits, and I made sure to pay and get the heck out a few minutes before 8 PM, just as the jazz band was warming up.

Nice! Went there on my 30th birthday to celebrate. I totally felt like the BF and I were in the movie. HA!

It was nice; I'd never do something like that alone in the US, which is probably why I keep traveling.

What a view! Perfect movie to watch on the way to Tokyo ;)

I have never seen Lost In Translation but the food at the resturant looks great and you didnt spend an arm and a leg to pay for it. The whiskey looks great can I have a some.How was it?

What a great idea for a post. I'm a big fan of Bill Murray, whiskey, and Lost in Translation so it was right up my alley. Thanks for sharing.

Thanks Steve, it was a nice way to end a long day of sightseeing in the city.