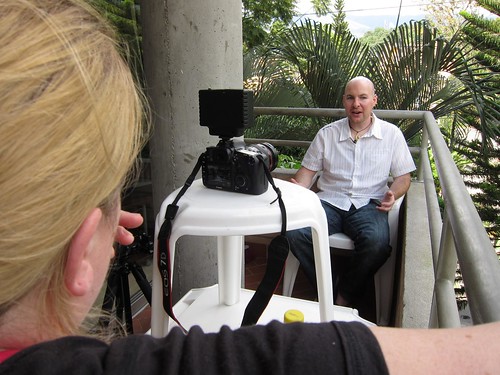 Christine interviews me on the balcony of my Medellin apartment.

When Christine Gilbert of Almost Fearless contacted me over the Summer about being interviewed for her video documentary about the digital nomad lifestyle, I had to set aside my camera shyness once again and seize the opportunity.

Frankly, I was flattered she thought of me, seeing as how I spend much of my non-travel days watching and interacting with an ever-growing number of savvy, talented bloggers via social media.

After TBEX wrapped up in New York City this past June, I flew to Cartagena for some R&R, while Christine, her husband Drew, and baby Cole went to Bogota to do their first pair of interviews with Jeff of Career Break Secrets and Jason and Aracely of Two Backpackers.

I watched her tweets as they began to discover Colombia for the first time.

I imagine they were also learning a lot about shooting a documentary, seeing as how this was their first.

And then it was my turn to welcome the Gilbert family to Medellin proudly.

We all arrived at a high point of the year for city events as Colombiamoda, the country's annual fashion week, was leading right into the 10-day Feria de las Flores festival. 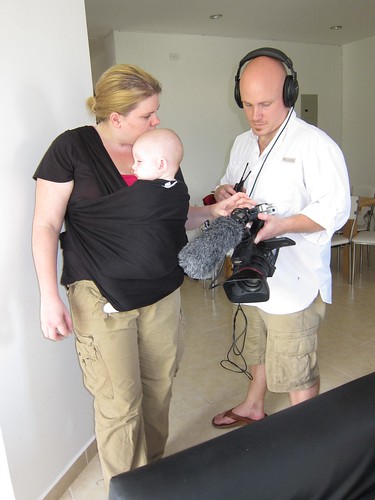 Christine and Drew set up the video camera, while baby Cole hangs out.

At the time, I was temporarily living in an apartment in the Belen, Malibu neighborhood.

The 4-story building is on a quiet side street. However, it is frequented by city buses which can be unbelievably loud.  On top of that, we were situated at the north end of the domestic airport.

During the day, planes are regularly taking off and landing, and the noise is enough to require a pause in even a normal conversation, let alone a recorded one.

I had suggested we do my interview at the apartment because of the 360-degree mountain views from the rooftop. However, I failed to consider the utter unpredictability of the weather in this city.

On my interview day, the sky was overcast, and the air was hazy. Plus, Christine thought the mountainous background would be too similar to Jeff's interview in Bogota.

Instead, my interview took place on the 3rd-floor apartment balcony. It was a tight fit. However, Christine was pleased with the backdrop of green palm fronds behind me, and that's all that mattered.  I put on a mic, and they tested the sound.

It was good, though once we got started, the noise from buses and planes required us to stop and start many, many times.

To my surprise, I wasn't at all nervous during the interview.

I think it was partly due to the nature of the questions — all about my life of travel the last few years, and how I make a living as a blogger, versus say, global politics.

Christine was also very good at making me feel comfortable (i.e., letting me know that I looked and sounded good on camera). As a result, instead of feeling anxious, I felt excited! 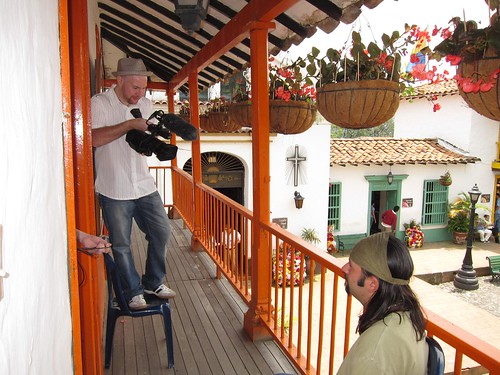 I held the video camera for Troy's interview, recorded on a balcony in the mock Antioquia village of Pueblito Paisa.

I wasn't the only one being interviewed in Medellin.

Troy Floyd, amateur photographer and regular contributor here at Go Backpacking, was also interviewed for the documentary as he makes his money trading stocks online.

He wanted to be interviewed next to a small pond in Medellin's botanical gardens, however by the time we got there one weekday afternoon, Christine set up her camera and began asking questions, the sunlight had faded.

Drew had to hang back at the hostel to do work for his day job, so I played the part of cameraman.

Their Canon video camera may look small; however, when you're trying to hold it still for thirty minutes, it quickly starts to weigh heavy in your hands. 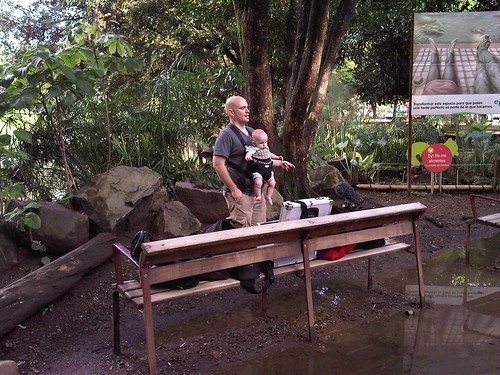 Drew bounces Cole around on location in Medellin's botanical gardens.

I assumed, wrongly as it turned out, that Christine and Drew would be in and out of Medellin rather quickly.

Instead, they spent three weeks, which allowed Troy and I plenty of time to show them around.

In the process, we shared a lot of laughs, a few adventures, and built great friendships.

In particular, I found myself increasingly enamored with Cole.  Never before in my 33 years had I spent so much time around a baby.

It might sound hard to believe. However, I come from a small family, and many of my best friends didn't start getting married until their early 30's, let alone procreate.

At five months, baby Cole was a drooling machine, with the occasional spit-up to keep his mom on her toes.

I watched with constant amazement at the amount of saliva the little guy produced.

There were only a few occasions when he cried for long periods, like when I met Christine and Drew for our first dinner in Medellin.

Otherwise, he was a real trooper during the interviews, restaurant meals, and other activities around town.

And everywhere we went, Colombians of all ages, male and female, would comment on how beautiful a baby he was.

The older women (clearly moms or grandmothers themselves) would walk up and play with him, often asking if they could hold him.

Their faces consistently lit up at the sight of Cole's big blue gringo eyes beaming back at them.

Tomorrow, I'll share a little more about our adventures in Medellin.

Awesome! I'm following Christine's progress for her documentary as well. Hopefully, our paths will cross! I LOVED Colombia.. my 2nd favorite country!

Jenny - what was your #1 favorite country?

I love Colombia, but I have a hard time picking just once place. Nepal is high on my list, as is Thailand.

Hey Pete, thanks for reading. It was a lot of fun to have Christine and family in town!