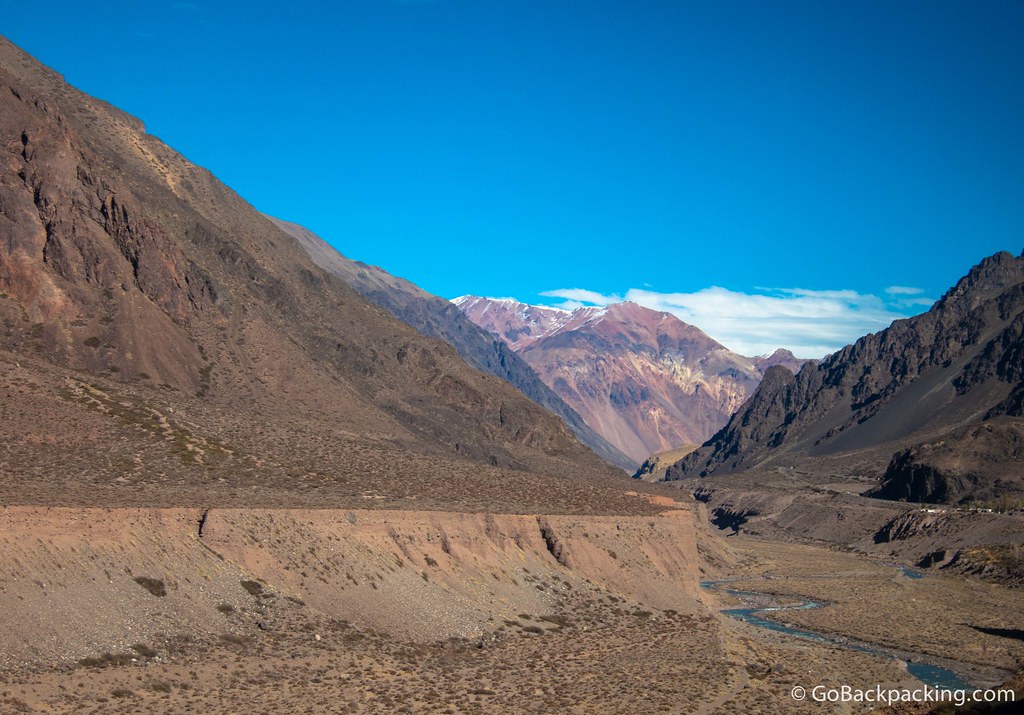 Breathtaking scenery on the ride from Mendoza to Argentina-Chile border

I may have entered Argentina by plane, but my departure via the scenic bus ride from Mendoza to Santiago (Chile) was worth the extra transit time.

In Mendoza, I bought my bus ticket on Andesmar a few days in advance for just $35.90.

By comparison, flights cost several hundred dollars, and you miss some of the most beautiful landscapes outside of Patagonia.

The ride lated about 7 hours, including the time it takes to pass through Argentina and Chilean Immigration.

The highway passes by Puenta del Inca, but this natural geologic bridge can't be viewed from the bus. My photo below was taken a few days earlier on a separate tour.

Another point of interest you can see from the bus, if only for a few seconds, is Aconcagua (6,960 m), South America's tallest mountain.

I lucked out in that it was a beautiful, clear day. Thanks to the GPS on my iPhone, I was able to snap a photo of the cloud-shrouded peak as we passed it by. 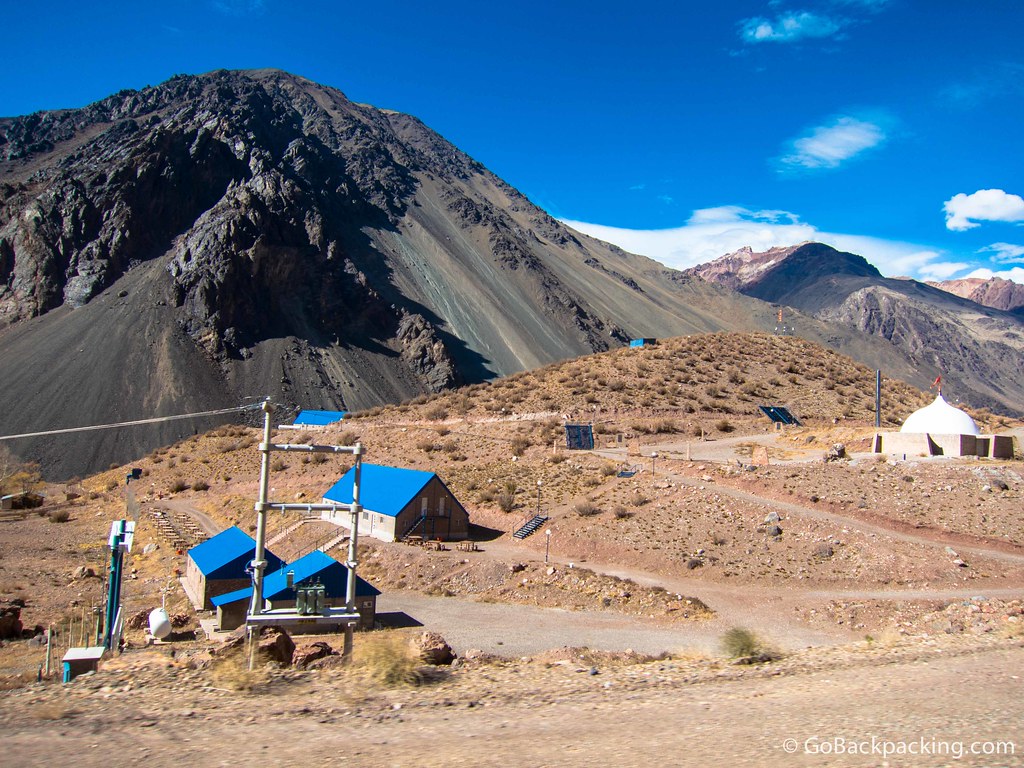 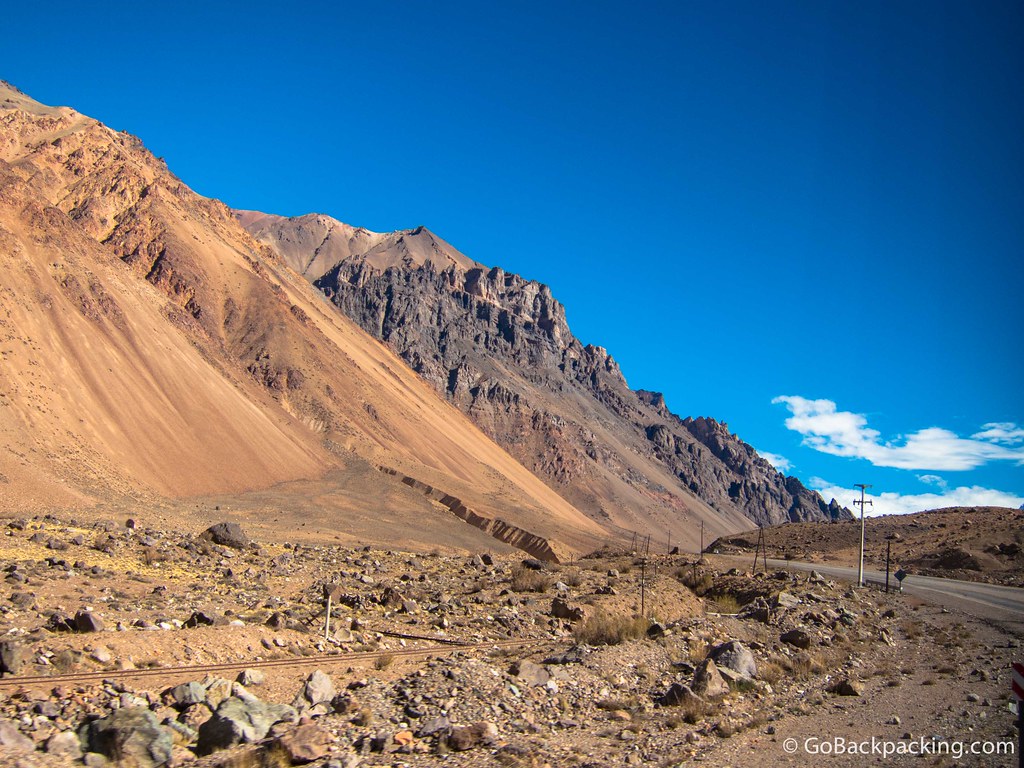 At times, the landscape looks more like Mars than Earth. An old railway line can be seen running alongside the road. 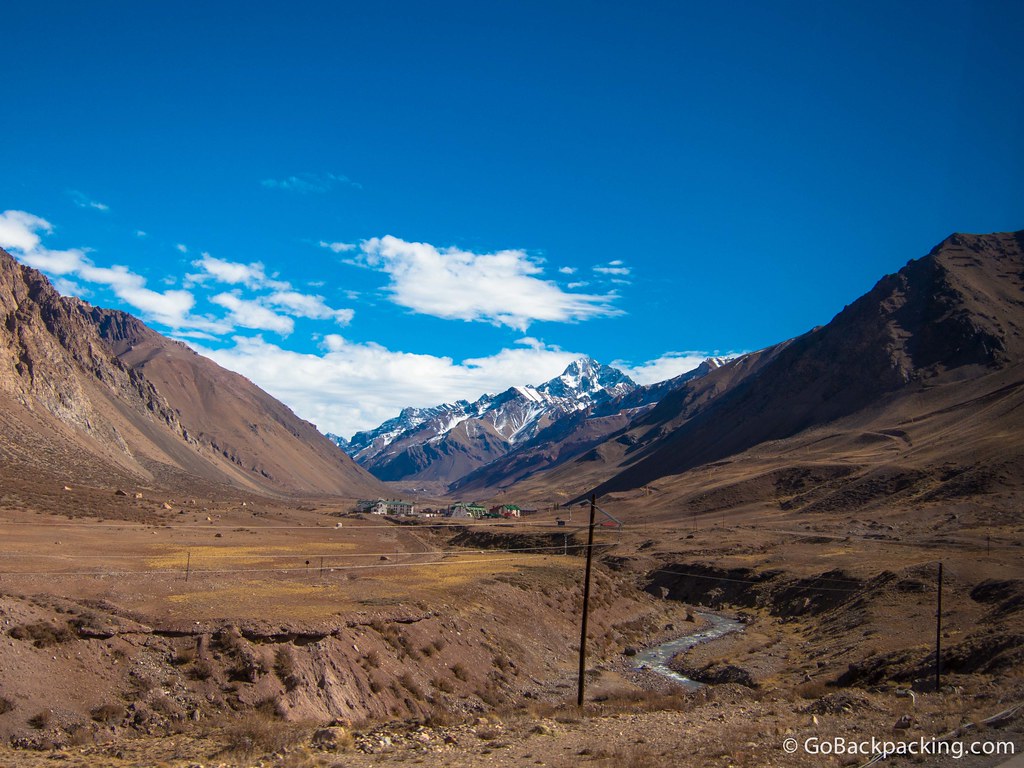 A ski resort nestled in a valley awaits the winter snows 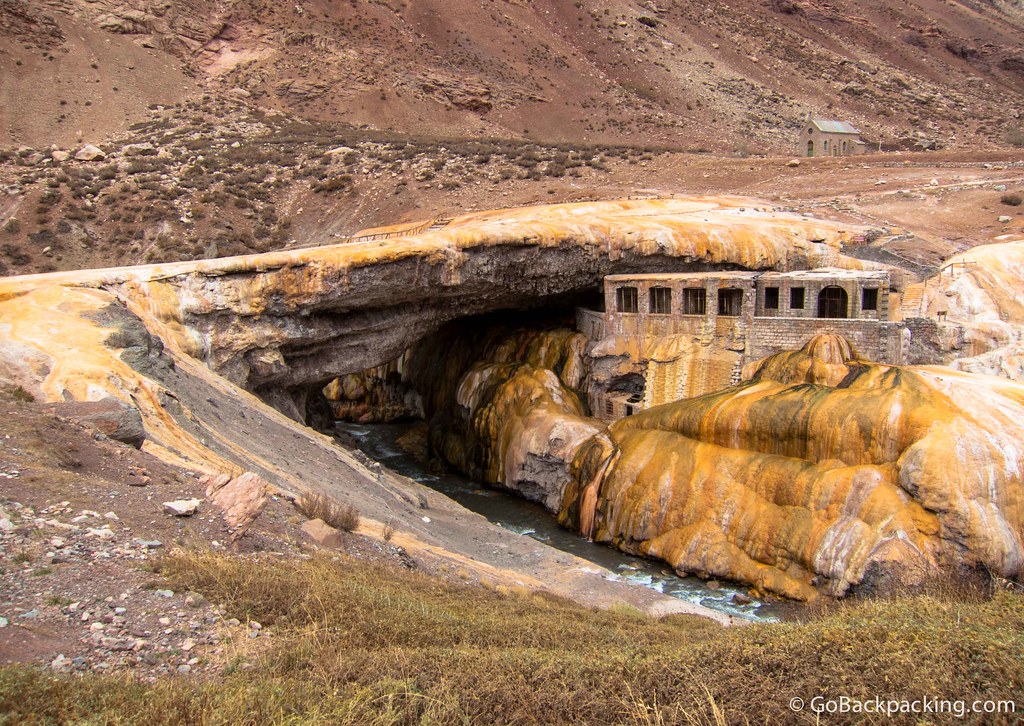 The Puenta del Inca is a natural geologic bridge once used by Incas to cross the river. In modern times, a spa was built under it to take advantage of the natural hot springs. 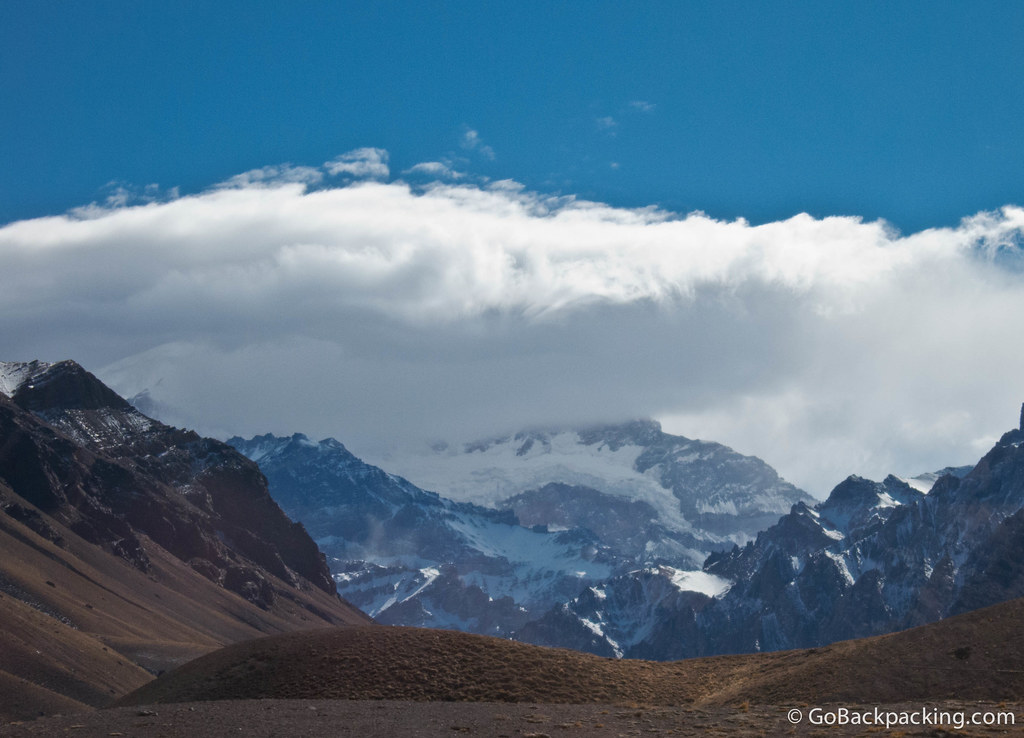 At 6,960 meters (22,837 feet), Aconcagua is South America's tallest mountain, as well as the tallest peak in both the Western and Southern hemispheres. 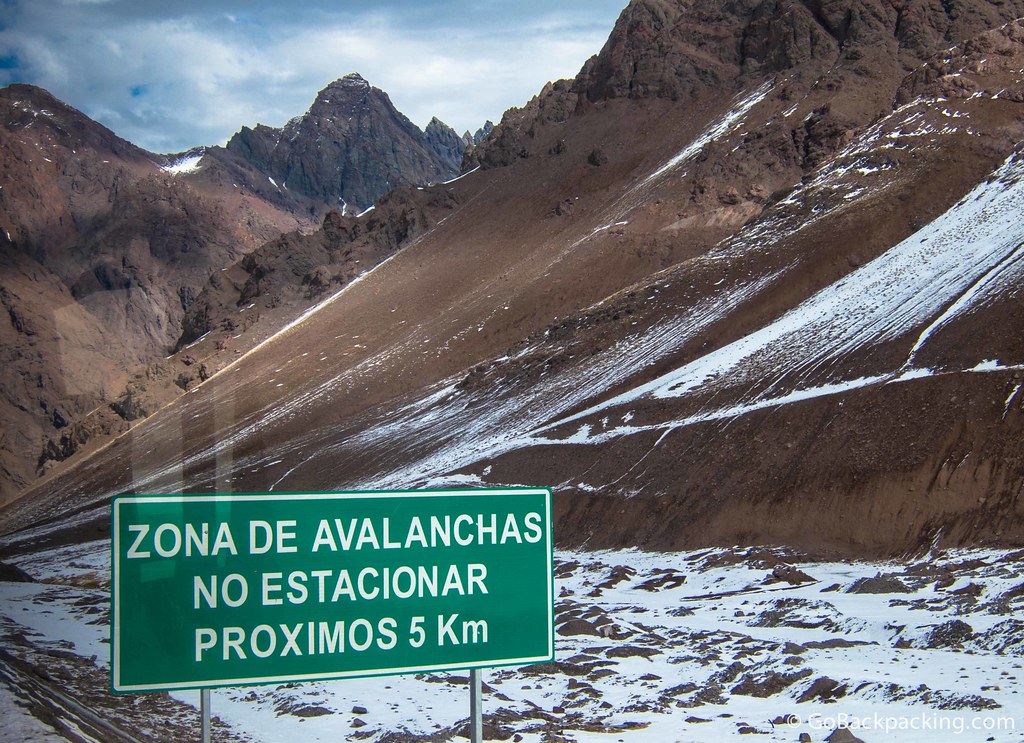 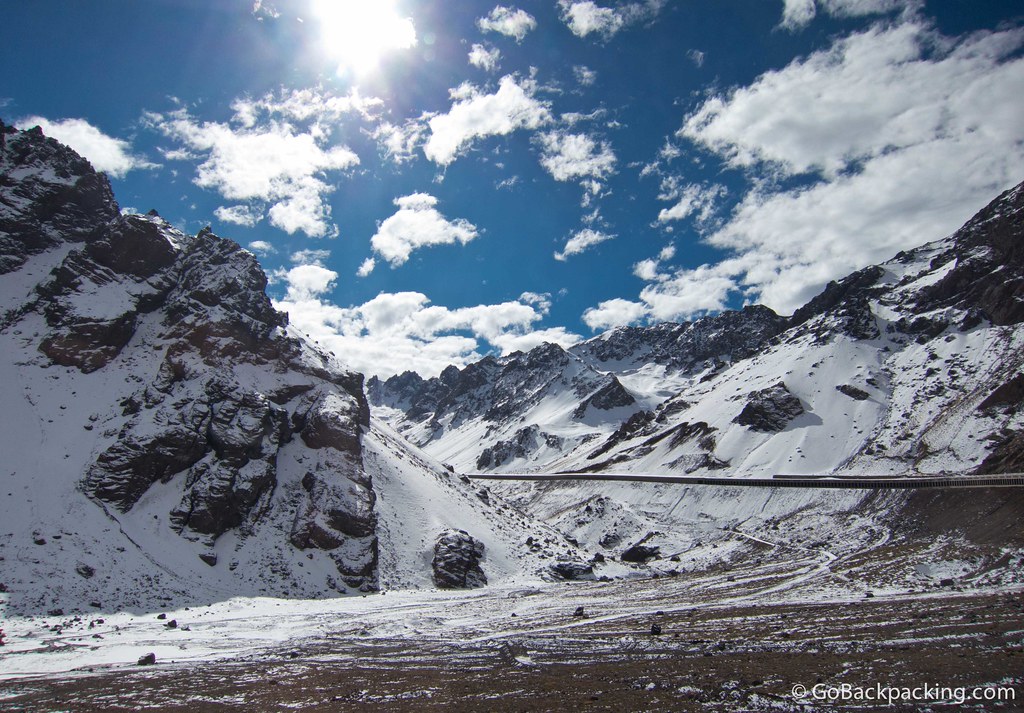 Looking backwards at the mountain road, some sections of which are covered by a cement roof to protect against avalanches. 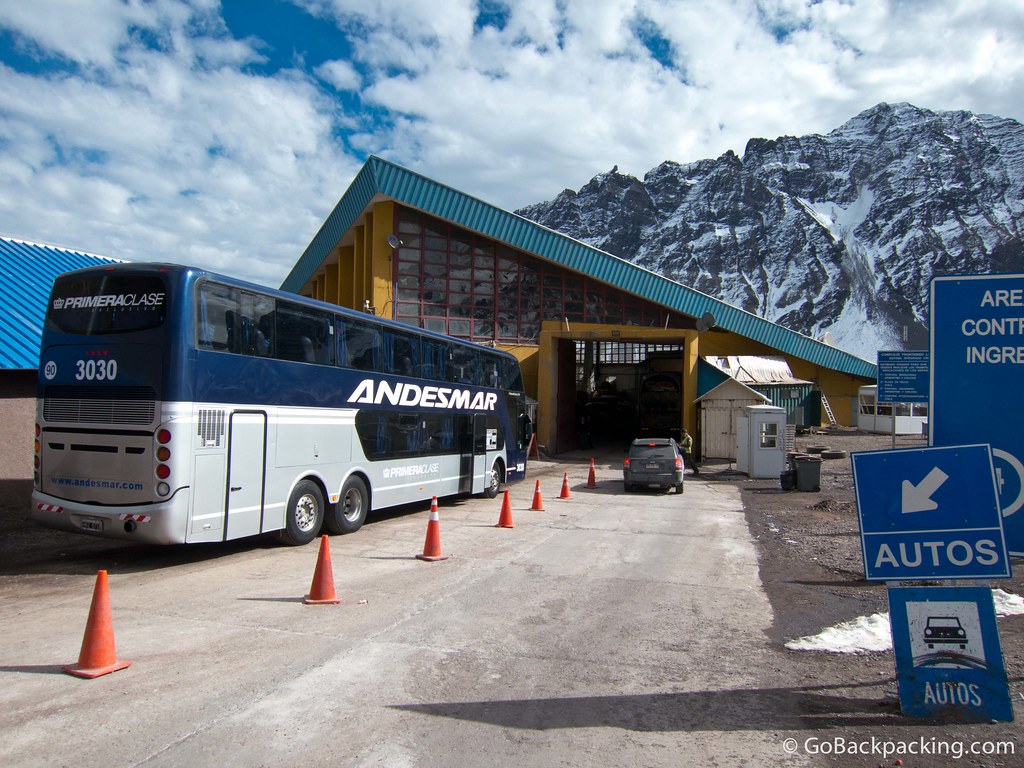 Our bus parked outside the Chilean immigration office, which has the distinct apperance of a ski chalet 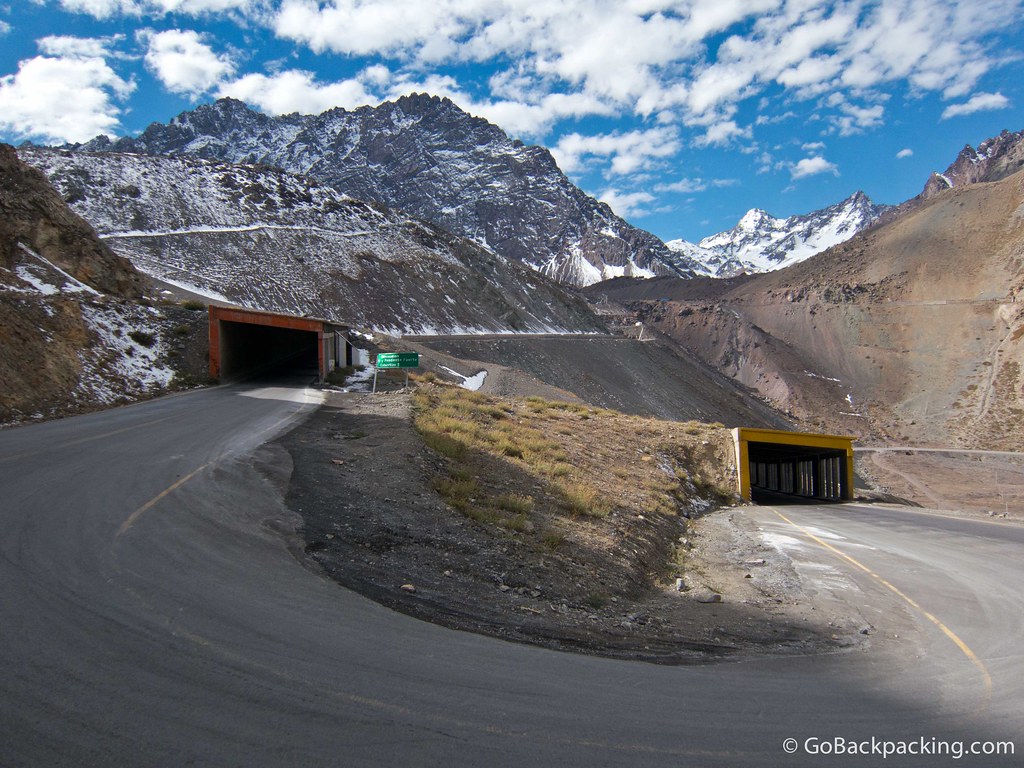 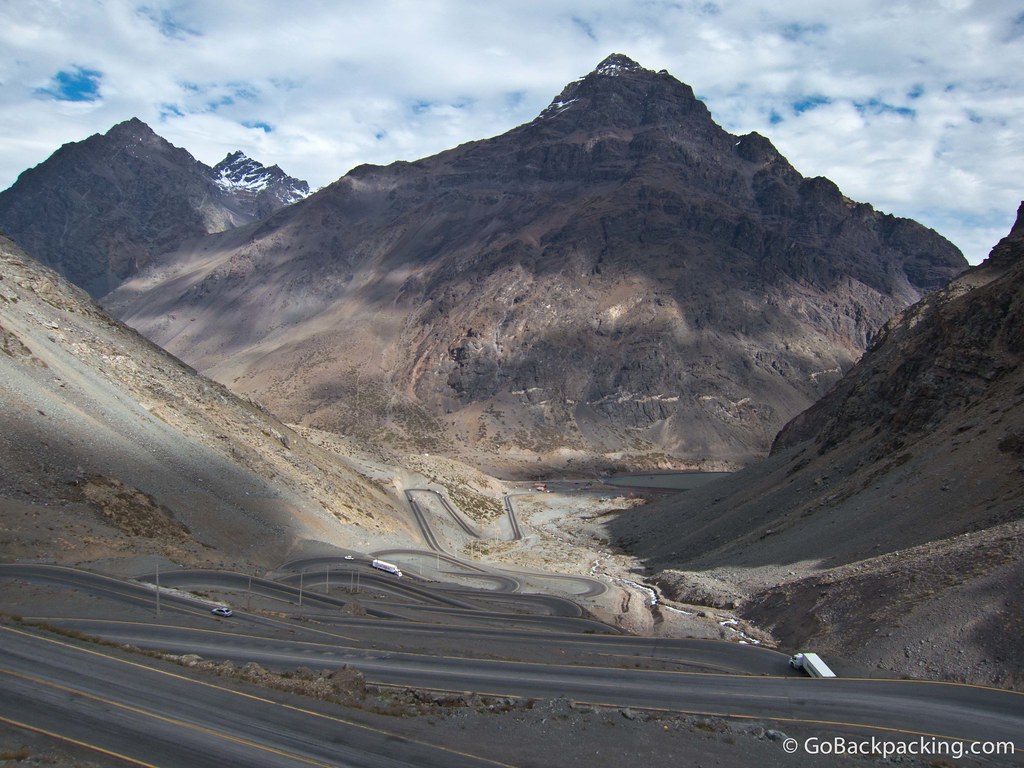 A long series of hairpin turns lead down the mountain 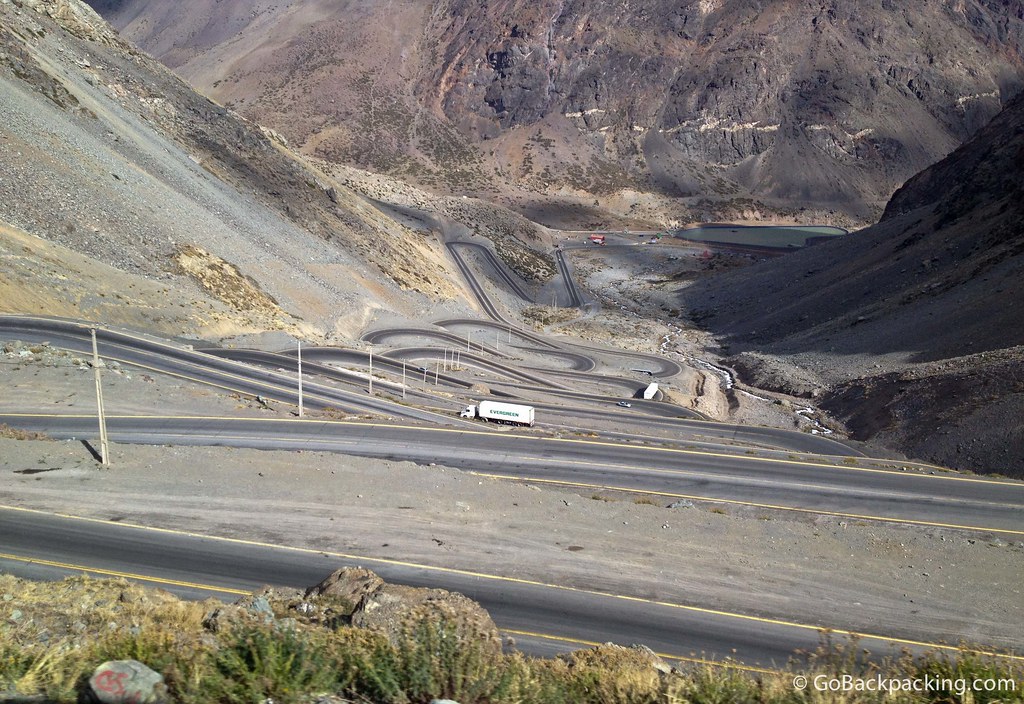 A closer look at those turns! 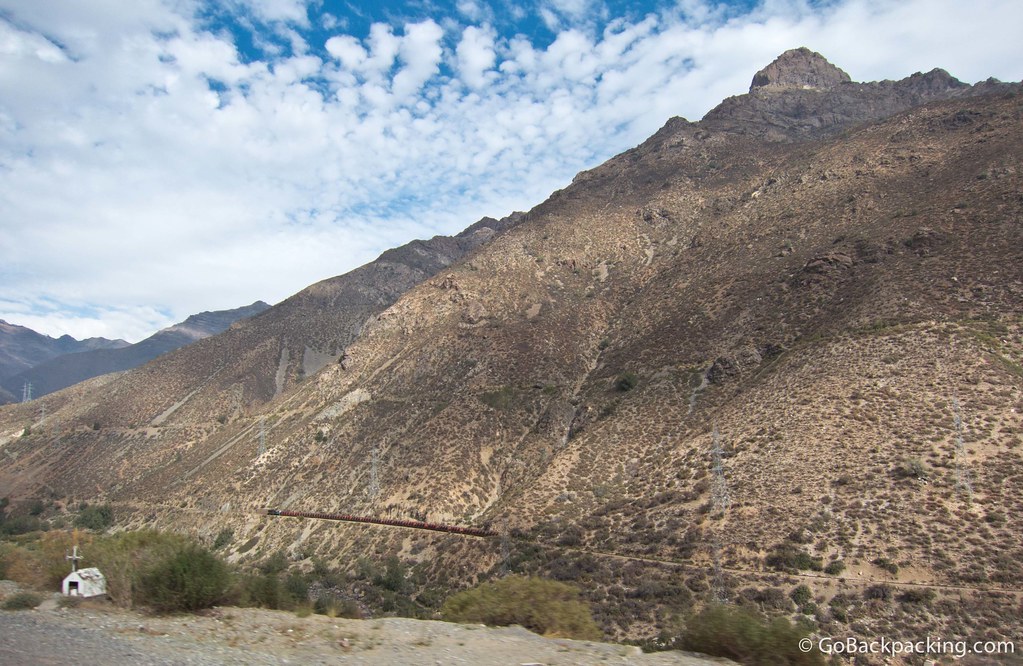 The remainder of the bus ride to Santiago isn't nearly as exciting. As the highway leads you to lower altitudes, the landscapes are mostly dry and scrubby. In this photo, you can see a red train making its way across the lower section of the mountain. 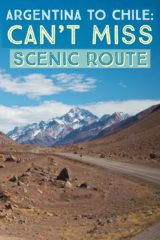 Hi, I shall be in Medellin between Dec. 16, and leaving at 19. Any tips for Medellin. After Medellin, I shall travel south to Brazil, Uruguay, Argentina, and last to Chile before flying back to Toronto. Your advice will be greatly appreciated. Stephen

I'm planning to catch the bus from Santiago to Mendoza in November and on the return journey, need to be back in Santiago by Friday, 25th November to catch the flight home. I have been told that the bus schedule isn't published until 4-6 weeks before departure. Do you know if generally there are buses on this route every day and are there any overnight buses?

Hi Dave! Would you know how the road is during winter? I've read somewhere that the roads partially close or something during winter. We will be doing a South America trip (Peru, Bolivia, Chile and Argentina) next month (July) and was also thinking about doing your Mendoza - Cordoba - Buenos Aires route. :)

I think the pass may be closed in Winter due to the amount of snow they get. It'd be quite dangerous. You'd probably have to fly.

We are thinking of doing the same route but the opposite direction, Santiago to Mendoza. Just curious, if there are no breaks other than the border crossing, is there a change of driver somewhere along the route? This trip is currently showing as 11.5 hours online, so rather a long haul for one driver.

Hi Dave, Thank you for a great post! Slightly strange but practical question -- Can you let me know if there are any toilet break stops along the way! Also, do the windows open on the coach? :) Thanks

The only break I recall was when we were crossing the border. I believe snacks were served on the bus, and it was equipped with a bathroom, but I can't recall 100% for sure.