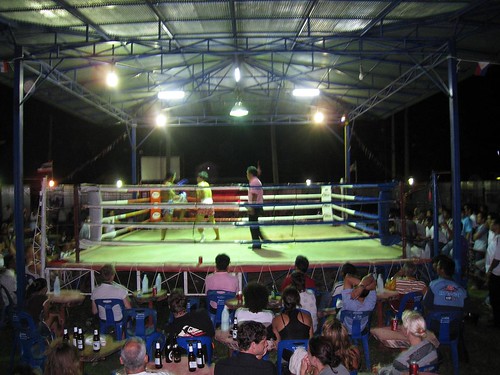 Steve had trained in Thailand's national sport, Muay Thai, for three years back in England so he was excited to see his first match, and myself, Chrissy, and Diana joined him for a night out on Koh Phangan.

The ride there was about 30 minutes, with the first half spent twisting, turning, and bumping around on the dirt roads in the back of the modified pick-up.

The “stadium” felt more like someone's backyard. There was a small bar, a few bleachers, and tables/chairs around the ring for those who paid extra.

I was glad to attend the fights with Steve because he was able to appreciate some of the technique and answer questions.

The format was similar to what we'd have seen anywhere else. 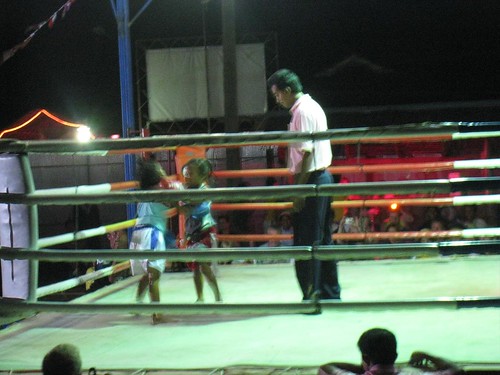 The whole event lasted about three hours and started out with tiny little kids fighting.

We'd heard about this so it wasn't a surprise, yet it was mildly disturbing. In this case, the tots were girls.

At first it was novel to have the small kids fighting intermittently as the night progressed, however, it then seemed to become more of a filler between bouts with increasingly older guys. 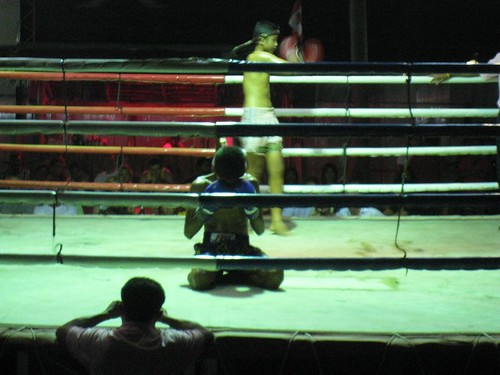 In fact, the two best fights of the night, which came at the end (of course), resulted in KO's within the first round.

Before one of the fights started, I picked a guy in red trunks to win. He was short, tan, with well-defined muscles, and a good game face.

His opponent was a beanpole by comparison, and while taller, seemed to lack muscle mass and any sense that he was going to come out of it a winner. 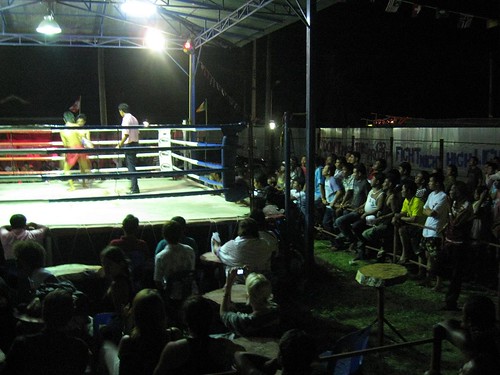 Earlier in the evening, the audience was almost all tourists, however as the fighters got older, more Thais filtered in to give the experience a better sense of authenticity.

Steve was disappointed that his first fights in Thailand were not so fantastic, and resolved to watch some matches at Lumbini, the big stadium in Bangkok.

When it was all over, we rumbled our way back to Thong Nai Pan Noi for late-night cheeseburgers.

I was looking forward to the next night's entertainment, the biweekly Half Moon Party.