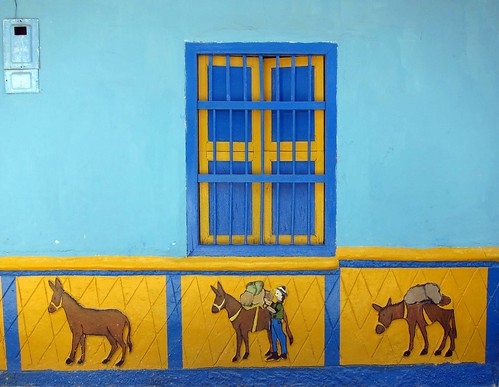 The colorfully painted panels of Guatape

Colombia's big-city dwellers from Bogota, Medellin, and Cali love to get away from their noisy urban landscapes whenever possible.

Weekends, holidays, and school breaks are all cause for them to head to nearby pueblos usually no more than an hour or two away by car or bus.

Vacation homes or apartments in these pueblos are called fincas, and if you're lucky enough to be invited to stay in one — go!

In August, Troy and I accepted such an invitation to Guatape, a popular weekend destination for Medellin residents.

Carrying the basics in a daypack, we paid no more than $10 for a one-way bus ticket.

We left on Friday afternoon, the trip is about 2 hours.

My seatmate was a real estate broker in Medellin who offered me a 10% finder's fee for anyone I could refer to her.

She said she made the trip to Guatape every weekend.

I tracked our progress in real-time using GPS and Google Maps on my BlackBerry. 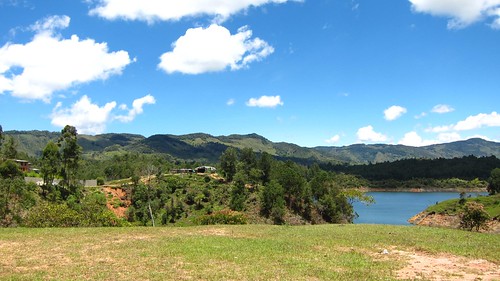 As we neared Guatape, the landscape turned into rolling hills, with small lakes surrounding them.

The bus dropped us off in Guatape's central plaza, which was bustling with the usual mix of people, motorbikes, cars, and buses.  Unlike big cities, there were also tuk tuks.

I immediately had flashbacks to Southeast Asia and India, though my first ride in one was actually in another Latin American country, Guatemala. 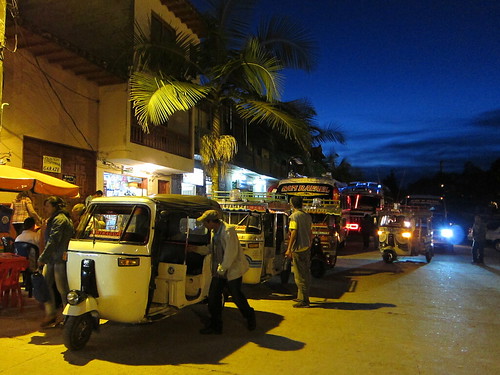 Guatape's tuk-tuks await their next passengers in the central plaza.

We dropped off our bags and grabbed a few beers and arepas con queso in the central plaza.

People continued to arrive via bus as it got dark, including another friend joining us for the weekend.

In the evening, the four of us went out dancing at a small bar.

It was crowded. However, we managed to get a table in a back corner, where a speaker was in the perfect position to blast us with popular salsa, merengue, and reggaeton songs.

Around 11 pm, police walked into the bar, and an announcement was made, followed suddenly by a mass exodus of people.

The message was that kids under 18 needed to leave!

There must be a local ordinance or curfew, because the following night at the town's larger lakeside club, the same thing happened.

Whatever the reason, it left more room for the rest of us. 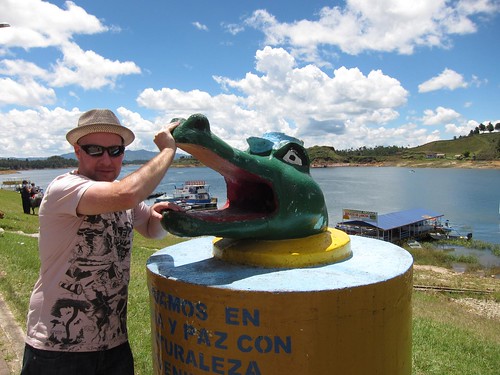 I am testing my strength against Guatape's vicious alligator garbage can

On Saturday, we awoke to beautiful blue skies.  While walking along the lake, we were approached by several guides hawking boat tours.

At the mention of Escobar's farm, I knew we'd be getting on one of those boats to visit the vacation homes of Pablo Escobar.

Other lakeside activities include a reasonably long zipline and renting jet skis. 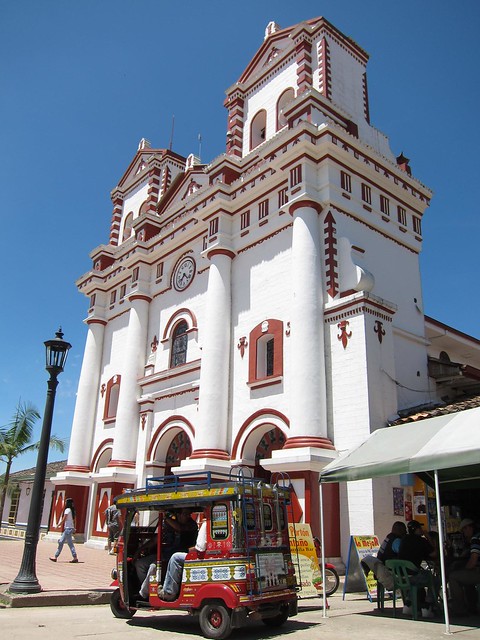 The rest of Saturday afternoon was spent walking around Guatape — it's not large; however, it's very idyllic, and as such, lends itself well to lingering around without purpose.

There were a lot of little observations to be made.

The popular gambling game in a tent across the street from the church.

The teenage kids are walking around with gallon bottles of Aguardiente or cheap wine, again, across the street from the church.

The variety of panel art on the facades of homes and businesses, each depicting unique aspects of the regional geography, culture, and lifestyle. 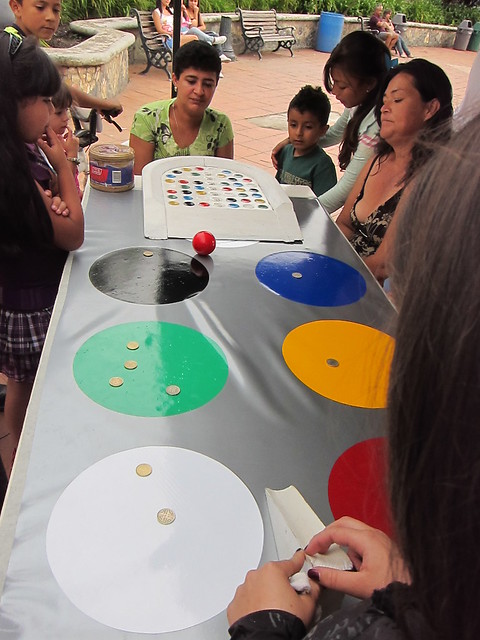 Across the street from Guatape's main church, in the central plaza, was a tent with a gambling game that always drew a crowd. The premise was simple, bet on the color that the rolling ball will come to rest upon

Saturday night, we found ourselves in a larger club more reminiscent of what you'd find in Medellin.

It's safe to say a lot of the kids in there drinking and dancing that night were from Medellin. 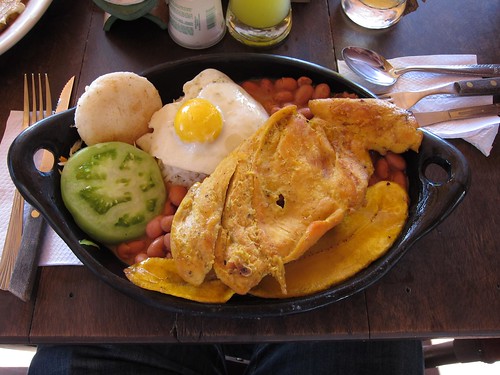 Sunday afternoon was spent visiting El Penol, a monolith in a nearby town by the same name.

Check back tomorrow for more about our visit to this giant rock, which is also a popular day-trip destination from Medellin.

Hey Dave- I think Guatape was gorgeous enough to warrant more photos- Here are a few of mine as well for you and your readers of Guatape (we shot a couple of similar things around town) Guatape, Colombia + The Majestic View from La Piedra hope this adds!

Wow, this is my next travel for shure.

Thank you for this precious informations.

Heading there tomorrow Dave! Nice to read a bit more about what to expect. Cheers

Guatape is my favorite pueblo in Colombia. Enjoy!

Since matching for some time for just a proper read in sees to this sort of ecological niche. Assaying in Bing I now spotted this internet site. Looking at this information So i am pleased to bring that I have a very full impression I stumbled onto whatever I was ready for. I'll make sure to don't forget this internet site and dedicate it a look systematically.