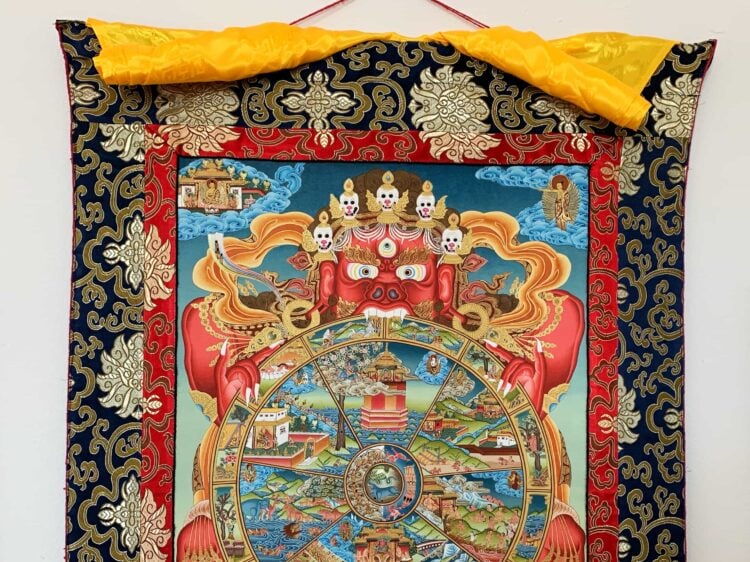 The Wheel of Life is shown in this Tibetan Thangka

I've bought a lot of cheap trinkets in my travels, like the infamous Thai Beer Can Tuk-Tuk, but there is one souvenir that makes up for all my episodes of bad judgment — a Tibetan thangka I bought in Kathmandu, Nepal.

While it's the most beautiful piece of art I own, it's also by far the most expensive souvenir I've ever purchased.

The paintings typically depict the Buddha, other Deities, mandalas, the Wheel of Life (as you see in the photos here) or other important scenes from Tibetan Buddhism.

Full of symbolism, they are hung around monasteries and homes to illustrate Buddha's teachings, as well as for decoration.

Before leaving home, I had encountered thangkas at a Washington, DC Buddhist center and at a DC shop that sold crafts from the Himalaya.

In that shop, there was a limited choice of thangkas, and the prices were around $500 apiece.

I wanted one badly. However, I knew I could get one for less if I went to the source — Tibet. 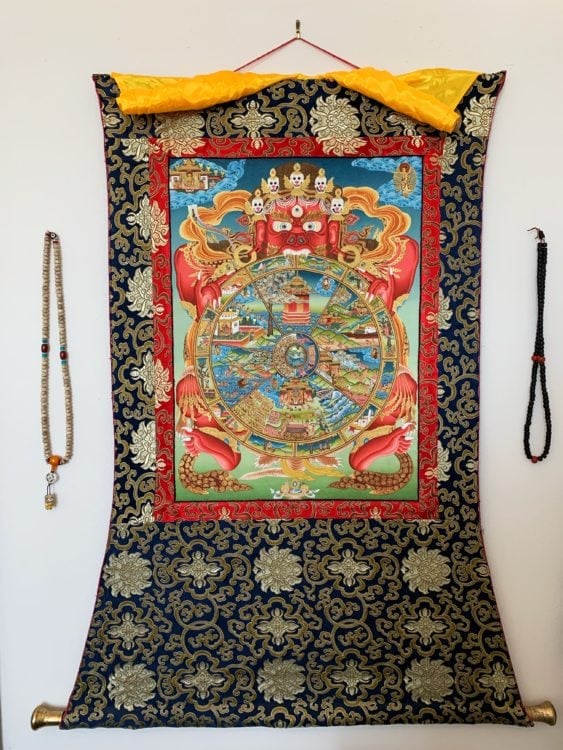 As it turned out, I never made it to Tibet.

I was in Chengdu, China, when riots broke out in Lhasa, and the border was closed to foreigners three days before I was to depart by train.

I had already visited Little Tibet in Chengdu, a street filled with Tibetan shops and monks.

Unfortunately, the majority of “thangkas” were just cheap prints, so I had to wait a little longer to see the real thing.

Once I landed in Kathmandu and settled in a guest house in the tourist ghetto known as Thamel, I began to explore.

The Nepalese people were friendly, and it wasn't long before I had shopkeepers inviting me into their stores to sit down for a cup of milk tea and look at whatever they were selling.

In the beginning, I had a trek to focus on, so my thangka shopping had to be put on the backburner, but when I returned to Kathmandu toward the end of my stay in Nepal, I dedicated an entire day to shopping for the best thangka I could find.

I'm confident I found it, and for those who would like to shop for one as well, I have a few tips on how to buy a Tibetan thangka in Nepal.

>>> Planning a trip to Nepal? Check hotel deals on Travelocity.

Just the painting, minus the cloth frame

6 Steps to Buying a Tibetan Thangka

And then be willing to break it. I paid three times what I initially thought I'd spend, but it was worth it.

Factors affecting the cost of a thangka include quality of painting, the skill of painter, size, and your ability to negotiate.

Select a subject in advance, or as early as possible in the shopping process.

Thangkas are hanging from shops all over Kathmandu and Pokhara, if not the rest of Nepal.

The sooner you can narrow down the subject you want to be depicted, the easier it will be to compare quality between shops.

3. Decide on the size

Think about the size of the thangka you want, inclusive of the embroidered frame.

Most of the paintings you'll browse will not be framed with the silk embroidery yet.

While you can frame a thangka like an ordinary painting, their traditional silk frames will distinguish them from other artwork you might have in your home.

The paintings are available in all sizes, and you can usually customize the width of the frame.

Note: It might take a day or two for the frame to be stitched together with the painting.

4. Allow yourself a few hours

Give yourself time to visit shops and thangka schools.

Talk with the shopkeepers. Ask questions about the stories and scenes depicted in the paintings.

Expect offers of tea to keep you in their shops. Accept the proposals as a courtesy. Enjoy the tea, but if they pressure you to buy, head for another shop.

5. Determine quality by looking closely at the lines

There are three general skill levels of thangka painters:

You can discern the skill of the artist by looking closely at the lines, such as those used to make waves, clouds, and the faces of people, deities, and animals.

The finer and more precise the lines, the higher the skill involved.

The student painted thangkas are the lowest quality, and therefore, the cheapest.

To start recognizing the minor differences between professional and master quality yourself (versus taking the salesman's word for it) look at a dozen or more thangkas of the same subject.

6. Negotiate before you buy

Once you've found the thangka you want, negotiate for it!

Nepalis expect this, and if you've already been to several shops, then by the time you pick the painting you want to buy, you will already have a good idea of the going rate for the same size and quality elsewhere.

Gold paint used for flames; when viewed at an angle, the paint shimmers

A close-up view of the hell realm reflects attention to detail and fine lines. These are both qualities to look for when determining the quality of thangkas.

If you plan to continue traveling for an extended time, you will want to ship your thangka home.

To ensure delivery, I recommend using a courier service such as FedEx or DHL.

The thangka I bought was painted by a master, on the larger side, and included the two wooden rods for the frame, with metal tips.

I paid $75 to have it shipped via FedEx from Kathmandu to Virginia in the United States.

It arrived safe and sound, packaged in a cardboard tube thick enough that I could stand on it without it giving way.

My Tibetan thangka still hangs in my home today, and I always get joy out of seeing it all these years later.

The reason why there are more thangkas in Nepal than Tibet is because thagnkas originated in Nepal. It's not solely represented by Tibetans but it's a Buddhist thing. One mistake tourist make in Nepal is that they think all buddhist stupas are tibetan made and monks are tibetan. This is very wrong as I have seen Nepalese people get angry over this identity. There are many caste in Nepal that has a mixture of both Buddhism and Hinduism in their faith. After all Buddhism is reform of Hinduism and Buddha was born in south Nepal. I have seen Hindu people worshiping in buddhist stupas and vice-versa because they share the same god. There are also many places of worships such as the money temple where both religion worship.

Birth of Thangka is Lalitpur Nepal from where it was taken to Tibet by Princess Bhrikuti who was married to the Tibetan Prince Son Tsang Gompa.

your information is vry usful for a layman and to bye a thangka as sovenier, but in Nepal so many artists who do not sell in the market, try to reach them will be a tiny good journey for art lovers.

You are right. There are many mass produced thangkas and you need to explore in order to find good or high quality. I found my Thangka (or maybe the thangka found me) in a small village close to Bhaktapur. I was able to visit the school and see both the Masters and students at work...the owner even invited me for lunch. The school is called Sunapati Thangka School and their website is http://www.traditionalartofnepal.com

Wow. That thing is beautiful.

Wow. That thing is beautiful.

Thanks Charlie, it was well worth what I spent, just waiting until I stop traveling and can take it out of storage.