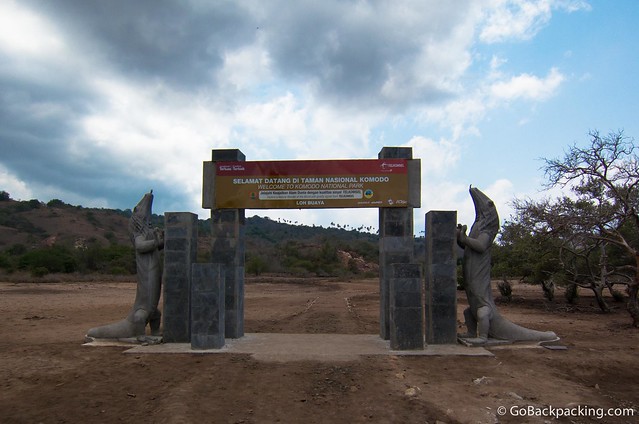 The stories began on Rinca Island.

A park ranger ambushed in his office when the door was accidentally left open.

Our guides seemed to take it all in stride, having grown up amongst endangered Komodo monitors, the world's largest living lizard, all their lives.

As a visitor, I was both fascinated and increasingly worried.

The only tool guides carry to fend off aggressive Komodo dragons, as they are more commonly known, is a carved, two-pronged stick.

The lack of weapons, even a hunting knife, reminded me of my game walks in Botswana's Okavango Delta, where it was illegal for the local guides to carry guns.

Instead, the guides' knowledge of dragon behavior minimizes the potential for tourists to find themselves in dangerous situations.

And if such instances do occur, they could be handled by non-lethal means by following the guide's instructions (which, I kid you not, may include climbing up a tree). 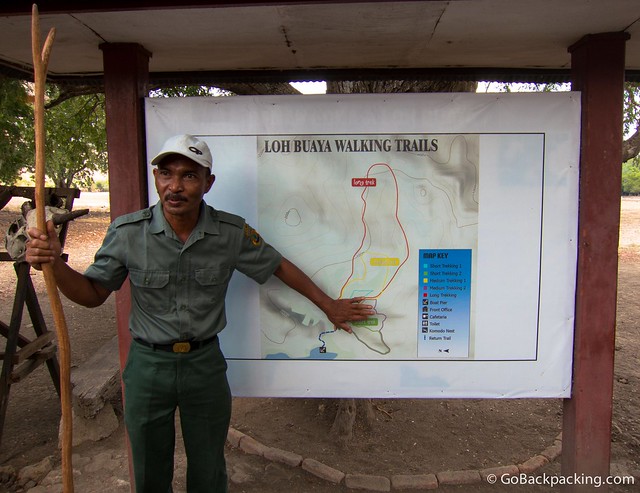 A guide explains the local trains around Rinca Island

It was a few minutes' walk from the pier leading to a stone gate, welcoming us to Komodo National Park.

To recognize and further protect the dragons, the park was declared a UNESCO World Heritage Site in 1991.

Beyond the gate was a small village, where we met the guides who would be taking us on a walk to observe the dragons. Rinca currently offers visitors two short trail walks, two medium walks, and one long walk.

For safety reasons, all visitors are required to walk with a guide, and no visitors are allowed to sleep overnight on the island.

After a short briefing, we only needed to walk a few meters before spotting our first dragon, camped out in the shade underneath a building.

Like all reptiles, Komodo dragons need to regulate their body temperature continuously. In the early morning and late afternoon, they search for food.

During mid-day, when the sun is strongest, they lie in the shade. After sundown, they return to their nests at the forest's edge or in the ground and sleep through the night.

The dragons on Rinca Island are smaller than those on Komodo Island, however, because Rinca is also smaller, the density of dragons make them easier to spot. 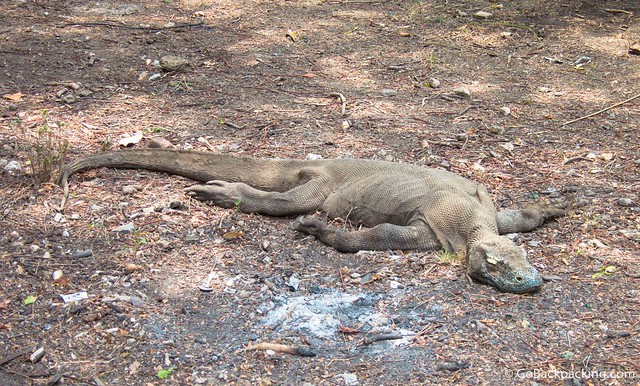 Nearby, an emaciated dragon with two broken front legs also lay motionless, except for its eyes. The injuries occurred years earlier, probably in a fight with another dragon, yet it continues to survive.

Komodo dragons do not actively hunt their prey. Instead, they rely on camouflage, and patiently wait for prey along game trails. There, they execute surprise attacks.

Our guide, for example, said he recently saw a Komodo Dragon eat an entire monkey in a single bite.

As a result of this behavior, the injured dragon is still able to catch small prey, which unwittingly walks in front of it. 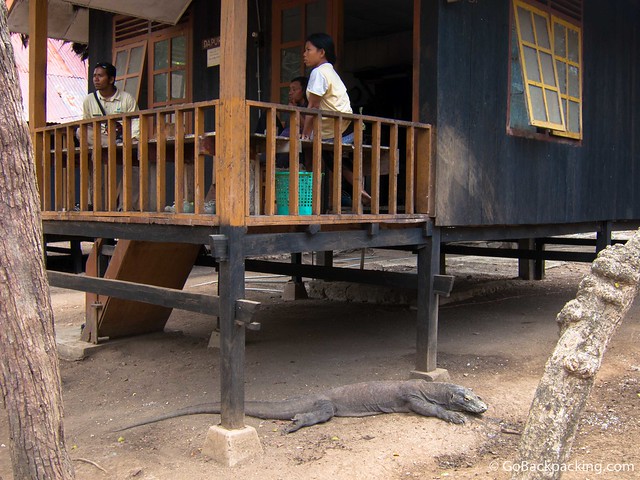 The larger prey, such as the buffalo, can require up to 20 dragons working together to take down.

It's this violent image of multiple dragons ferociously attacking an animal that has stuck with me from the little footage I've seen in nature documentaries.

Under the kitchen was another dragon. I was astounded to see the villagers sitting casually on the elevated staircase directly above it.

The dragons are drawn to the kitchen by the smell of food, but the people and park have a policy against feeding them. 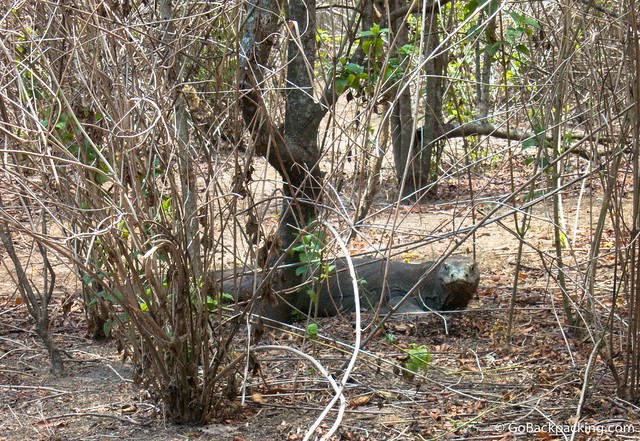 A female Komodo Dragon guards her nest (not pictured)

We walked a short distance further, out of the village and into the forest, to a dragon's den.

From our perspective, it was a short mound of dirt with two holes used to enter and exit.

Unlike orangutans, dragons re-use the same nests, perhaps to save themselves the work of always having to build new ones.

Dragons reach their sexual maturity in 6-8 years and can live up to 50 years.

This might explain the ratio of over three male dragons for every female dragon. Perhaps the ladies like to see all those males fight over them? It might be their way of ensuring a strong mating partner.

Male dragons, we were surprised to learn, have two penises. Science has yet to explain the purpose of their second reproductive organ.

Mating season occurs every year between July and August, with the females laying 15 to 30 eggs in August and September. It can take 8-9 months for the eggs to hatch.

It's common for young dragons to live in the trees in their first few years, to avoid being eaten by their elders. 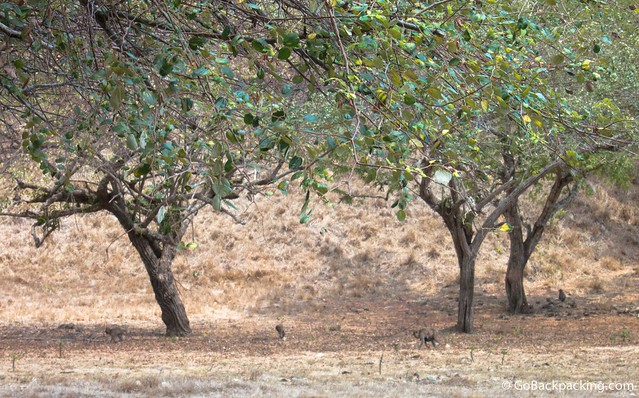 Long-tailed macaques are part of the Dragons' regular diet

While I would've liked to follow the trails further into the island, our time was limited.

We returned to the village, where we enjoyed lunch in a newly built, open-air building while watching long-tail macaques run through the surrounding fields.

From Rinca Island, we left by boat to visit another, smaller island, for an afternoon of snorkeling. 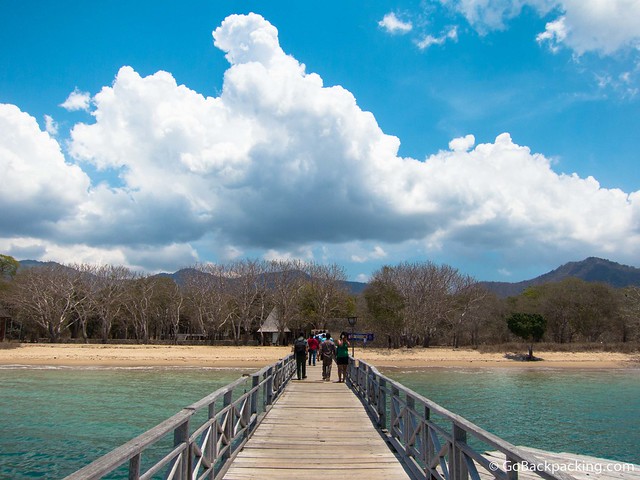 In 2008, during my first visit to Indonesia, I was aware of Komodo but passed up the opportunity to join a friend for the trip, which required two days to reach from Lombok, the island just east of Bali.

I always imagined Komodo to be an unfriendly and ugly place, so my preconceived notions were immediately smashed when we approached the clear, turquoise waters washing up against the beach. 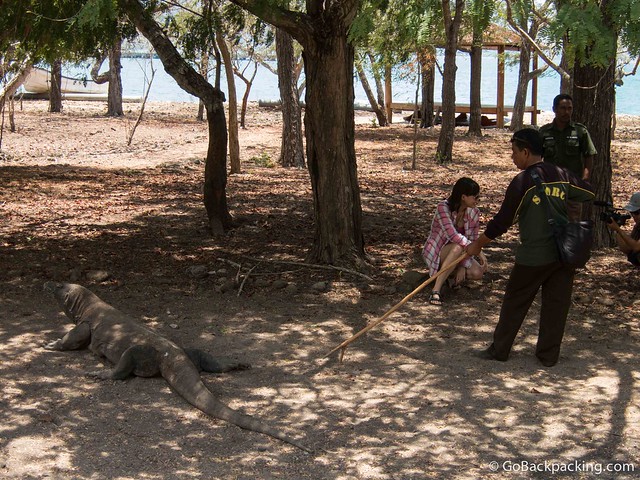 Guides ensure a Komodo dragon keeps its distance from Olga, an Indonesian model and TV personality who joined us for the trip to Komodo Island

Disembarking the boats, we walked down the long pier and onto the island. Local guides greeted us immediately, carrying their tell-tale sticks to fend off aggressive dragons.

I'm slightly embarrassed to admit that we didn't even need to leave the seaside village to get our fill of dragon action.

The dragons on Komodo Island are larger than those on Rinca, growing up to three meters (nine feet) in length and weighing up to 150 kilograms (330 pounds). 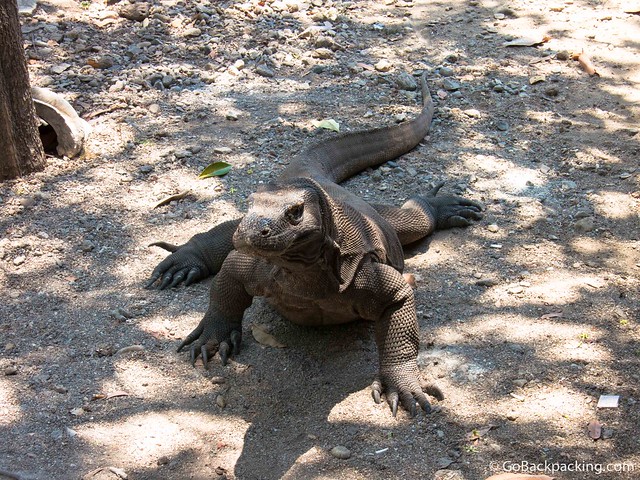 Up close with a wild Komodo dragon

It's a common misconception that they are poisonous. Still, it's up to 50 different kinds of bacteria in their saliva that can cause infections and death in prey (and human victims), not venom.

After the dragon bites its prey, death does not always come immediately, especially with the larger animals.

Instead, the dragon will follow the injured prey, for several days if necessary, until it is further weakened, or dead. Then, it feasts. 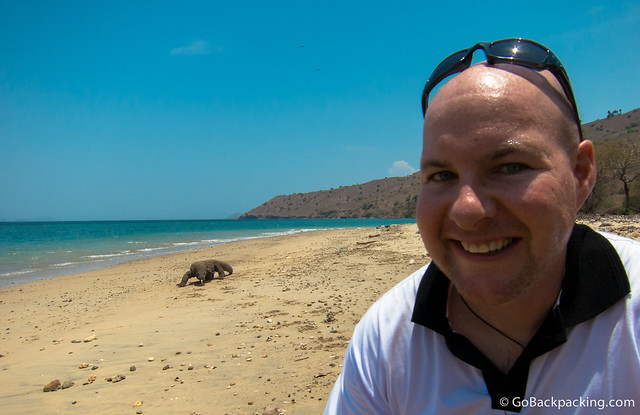 You didn't think I was going to leave the island without getting this shot, did you?

In the village, a large, alpha male Komodo dragon was especially active upon our arrival.

It was interesting to see deer just 20 meters away from their predators. Such a site is common during safaris in Africa, as well.

Toward the end of our visit, we followed an enormous dragon onto the beach, where the direct sunlight fully illuminated its scales and colors.

Komodo dragons are capable of swimming several hundred meters out to sea. 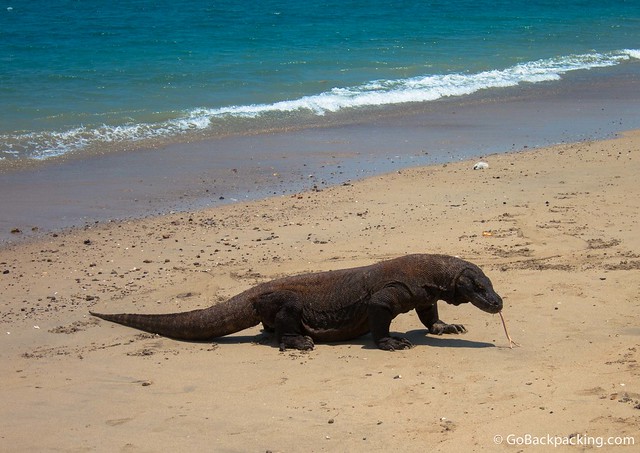 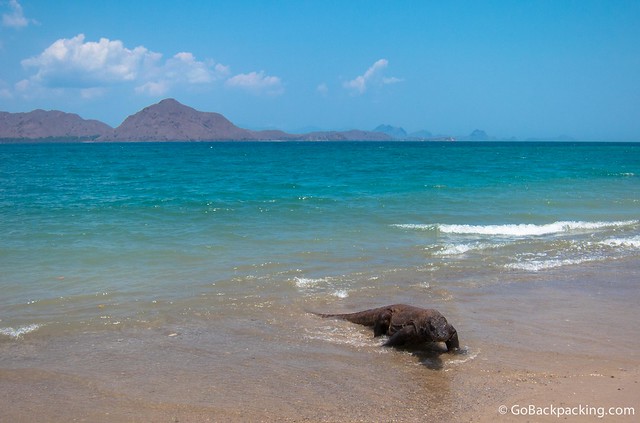 The next Swimsuit Illustrated cover model?

After seeing the dragon on the beach, we walked back to the pier and hopped in our boats for an afternoon of snorkeling.

Believe it or not, we would be snorkeling off Komodo Island.

Those dragons are so scary! As much as I enjoyed the trip there with you I hope to never visit again! haha I was so afraid!

OMG, this is so cute! But for sure I would not like to be enjoying my swim and then spot a komodo dragon next to me :D

I too missed Komodo Island while in Bali and the Gili Islands last June. Thanks for the virtual tour. I wil definitely have to go back for more of Indonesia.

What I learned is Komodo Park is worth it not just for the dragons, but the beaches, snorkeling and diving (which I didn't do) too. Lots to return for!

Komodo Dragons are my favorite! Going to Rinca changed the way I traveled. from that point forward I made a point to see animals out in the wild. It is a magical experience seeing them in their native habitat. Great post!

Definitely Michael. That's how I felt about seeing animals on safari in Afica. It requires more patience, but I also value the whole experience more than just seeing them in zoos now.

These beasts are scary! You were lucky to see them on the beach. I hear it's not so common.