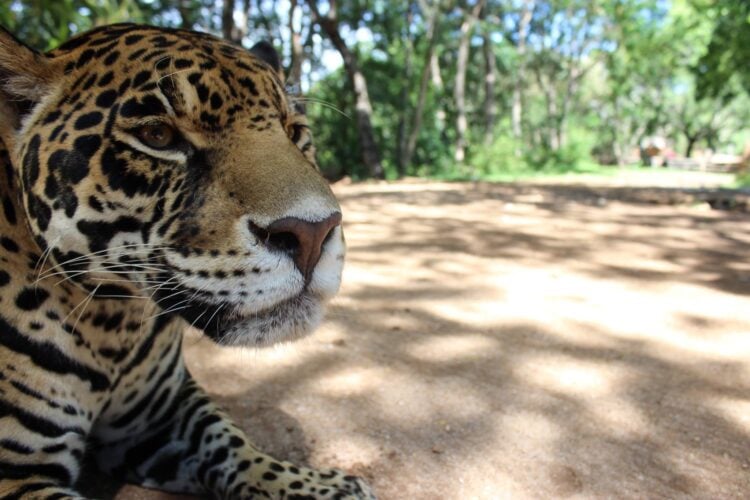 There is one adrenaline-pumping experience greater than jumping from a plane and just as serene as floating in a hot air balloon as the sun rises. That extraordinary high that comes from a close encounter with jaguars.

Jaguars are powerful and unpredictable animals. As Latin America's largest cats, they're built with broad heads, powerful chests, and short but strong legs.

Would it be realistic to expect these animals would act other than nature intended, no matter how well caretakers have looked after them?

I am well aware of the inherent controversy surrounding the exploitation of exotic animals with controversial examples like Seaworld and Thailand's Tiger Temple covered on blogs and in major media outlets.

However, Margarita Salgado Miranda and the Zoofari team carefully explained the entire caretaking process, and I feel comfortable with their explanations and methods.

Anyone on the fence about Zoofari or doubting their practices can direct their specific questions to Margarita Salgado Miranda.

I have always kept the idea of hanging out with something like a tiger, lion, elephant, or jaguar in the back of my mind for sometime later in my life.

What possible scenario would I realistically expect to be given one-on-one time with a big jaguar?

I am an opportunistic adrenaline junkie.

I don't go out of my way to jump off bridges, trek through high altitude mountain ranges, or even raft through whitewater rapids.

These “bucket list” opportunities present themselves through the perks of my job and my usual travels.

Both my imagination and lack of real knowledge about animals led me to believe that my experience with a pair of rosette striped baby jaguar cubs and a couple of adults would be even more thrilling bungee jumping or skydiving. 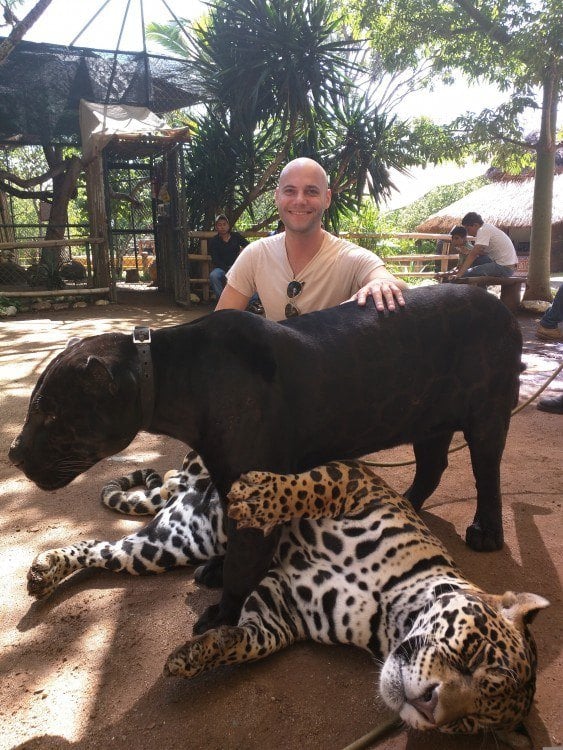 Rolling around with a couple of jaguars

Learning about the Jaguars

My guide for the afternoon at Zoofari, Margarita Salgado Miranda of Excursiones Margarita.com, explained that jaguars are hunters.

They use their extraordinary speed, stealth, and eyesight (six times better than humans at night) to launch a single bite into anything from alligators and fish to monkeys and deer.

Their jaws, tougher than any other cat species, give them another advantage as they can bite through bones, which are often part of a jaguar's diet in a zoo.

“Zoofari visitors can't believe that we can care for animals as aggressive as jaguars in a zoo-safari setting. But we understand and know that the jaguars and other animals we care for are dignified creatures that have become a part of our family.

That's why when staff or nature enthusiasts from Mexico and around the world visit us they all want to know the secrets of our caretaking and training methods.

The reality is that our success and wellbeing of the animals comes as a result of the patience and affection from our caregivers, because they have the joy of being able to communicate and interact with them in that special way.

Our park has become known as a role model for these reasons as we continue to promote environmental education through school visits, talks and overall awareness. ”

Although Margarita was just as excited to tell me about the other 129 species being cared for at Zoofari, I was far more interested in what I would consider the grand finale of this Mexican safari.

The precious time spent with the park's big cats; the jaguars.

Coincidently enough, I would be able to play around with the same menacing black jaguar shown in Mel Gibson's Apocalypto movie.

This jaguar has jet black fur because of a genetic mutation, while the other rosette spotted jaguars and cubs I played with could easily be mistaken for tigers. 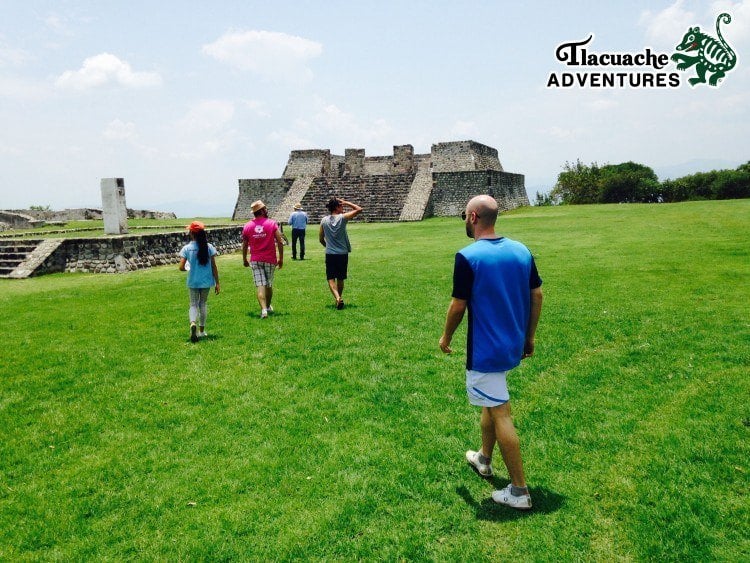 The massive 250-pound jaguars are by far the largest cat in Latin America with their powerful and sleek movements that have earned them an important place in Mexican legends dating back to the pre-Columbian Aztec and Maya civilizations.

One of the monuments depicts a “snarling jaguar,” according to historian Richard A. Diehl in his book, Mesoamerica After the Decline of Teotihuacan, A.D. 700-900, Parts 700-900.

Why do the Mayans and others from Mesoamerica repeatedly depict the jaguar in their culture?

Maria del Carmen Valverde Valdes from the Mesoamerican Studies Department of the Autonomous University of Mexico (UNAM) explains that jaguars “are like the symbols that intertwine and relate the man with the earth, the underworld, fertility, and life.” 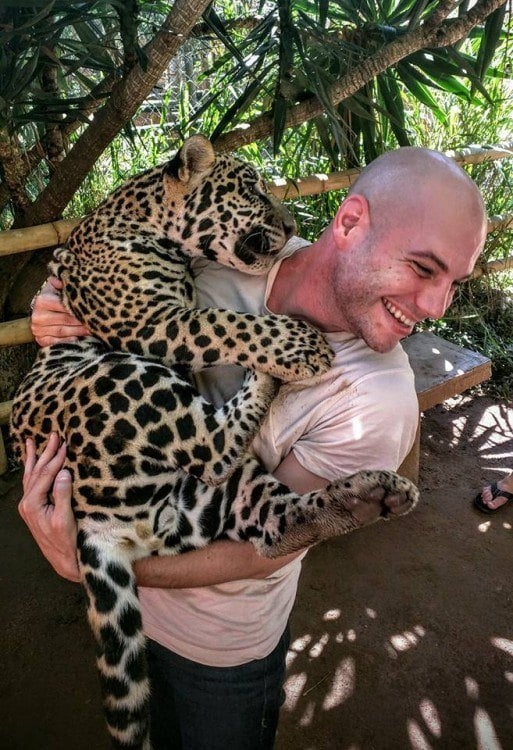 My Experience with the Jaguars

Armed with better knowledge of the significance of jaguars from pre-Columbian to present-day Mexico, I ended this unique safari up close with the live jaguars.

It was an extraordinary, adventurous sensation to have an enormously powerful cat's lethal jaws touching my neck and torso.

The spotted jaguar licking my leg felt like dripping wet sandpaper rubbing against my exposed skin.

The aftermath of this slobbering was a few battle scrapes.

That's just one of the special moments I experienced when the caretaker presented two full-grown jaguars.

But what do you do when you don't know what to do? I felt both shy and beyond excited to do something.

Jesus, the chief caretaker and practically “their father” brought the jaguars beside me and let me have at it. I walked toward them shyly at first, forcing myself a little closer to Fary and Boox, until I silently mumbled, **** it!

I kneeled closer and began stroking their fur as if they were gentle cats sitting atop a windowsill.

As it became clear that I felt more comfortable in Fary and Boox‘s presence, Jesus gave me the silent nod to take it a step further and hug them–later lying around with them and my other travel partners as the jaguars messed around with us.

The time to say goodbye to the big cats arrived sooner than I would have hoped.

After saying goodbye to the big cats, Jesus returned with a jaguar cub light enough to hold in my two hands as the cub flailed around in my arms.

The sensation of holding a squirming jaguar cub is a  precious moment.

One of my travel partners Yolanda of Amigo Trails and We Are One Travel explained afterward:

“The experience with the jaguars was really unique and the icing on the cake for the end of the Zoofari visit. It is a must experience really so be sure to set this up in advance so you can take part in it as advance reservations are required.”

I practiced all of that and more as the jaguars wandered around the area with the caretaker following closely behind. 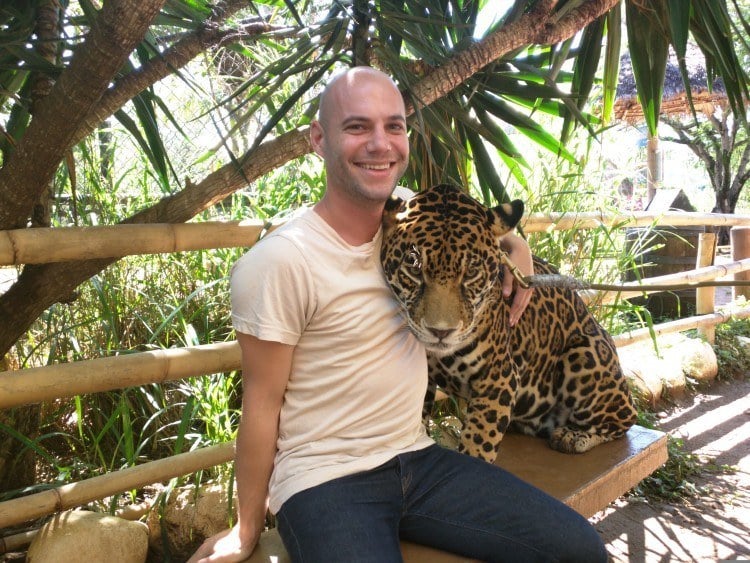 How to Visit Zoofari

Zoofari is open from 9 a.m. to 6:30 p.m. 365 days per year. Located between Cuernavaca and Taxco in the state of Morelos, Zoofari can easily be visited on a day-trip from Mexico City just 80 miles or a few hours drive away.

The park was opened to the public in 1984 for everyone to experience personal interactions with the 1,300+ animals in an intimate and open setting.

The park is split into six different sections, ideally explored from a rental car, which provides the opportunity to feed or watch animals like giraffes, zebras, ostriches, antelopes, rhinos, and more. The jaguars can be found in the sixth section.

Travel in the Mexican state of Morelos is often overlooked and easily worth more than a day-trip from Mexico City.

These are other hidden places you won't easily find online as a foreigner traveling in Mexico and a solid handful of activities to extend your travels in the region.

You can easily do all of this independently, but if pressed for time, I can personally recommend Excursiones Margarita.

Hacienda San Gabriel de las Palmas: A sugar plantation converted into one of Mexico's most exclusive hotels and restaurants.

Xochicalco: One of the least visited archaeological sites, complete with an underground observatory, pyramids, and more. It rivals Mexico's other most visited Mayan ruins, but it is mostly visited by Mexican tourists, and so no English guides are available on site.

Lake Tequesquitengo: Buried in this lake are remains of an old village. But these days, it is best known for adventure activities and sports like a microlight aircraft flight, bungee jumping, hot air balloons, wakeboarding with a pulley system, diving, kayaking, and more.

My safari experience in the Mexican state of Morelos was coordinated by English-speaking adventure tour operators Margarita Salgado Miranda of Excursiones Margarita.com and  Rogelio Teliz of Tlacuache Adventures. The experience was provided thanks to ATMEX, Morelos Secretary of Tourism, and Adventure Travel Trade Association. All opinions expressed above are my own.

I have been a fan of mexican food for quite a time, but my dearest ambition is to travel there and see the great exotic locations and Jason I am really envious of you, this Zoofari thing is really asking me to go to mexico. I thank you for this post.

I visited that same place last year, some people say that those jaguars are on drugs because otherwise they wont let you touch them, but as far i can remember they were just fine. Awesome pics Jason!