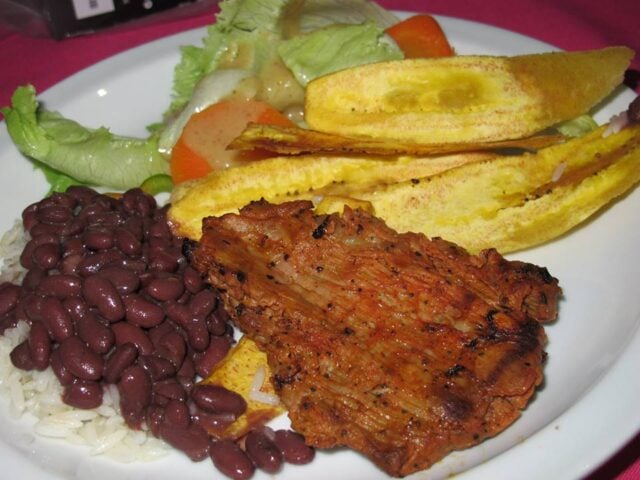 Editor's Note: The following is a guest post by Maria Laborde.

[L]ike in many Latin American countries, Nicaraguan food goes back as far as pre-Columbian times, being transformed and influenced post the Spanish Conquista.

This is evident not only in the name of some of its dishes, but also the ingredients and spices used in them.

Most of the traditional Nicaragua menu is known as “criollo,” which is how Indian-Spanish fusion cuisine is also called throughout most of the Caribbean, Central and South America.

There is a major difference between the Pacific, Atlantic/Caribbean, Northern and Central Nicaraguan foods—particularly the type of vegetables and spices consumed.

Yet, there is one omnipresent base ingredient: corn.

Furthermore, this ingredient is not limited to food, but also used in a variety of traditional drinks such as Pinole (pre-Columbian drink with cocoa, cinnamon, toasted ground corn), Chicha (fermented corn beer) and other fruit-based nonalcoholic beverages.

When it comes to other ingredients, those typically found in the tropics triumph here as well.

These include fruits such as mangoes, jocotes, papaya, plantains, avocado, and tamarind; in addition to starchy root vegetables such as cassava and quequisque (also known as Malanga or yautia).

Herbs and spices include others well-known around the world such as garlic, onions, tomatoes cilantro, oregano, achiote (annatto), cacao, cinnamon.

They portray how well seasoned, yet non-spicy, Nicaraguan cuisine is. Moreover, how the mixing of the sweet, savory, and sour is the norm—especially when it comes to seafood (in order to kill that “fishy” taste and smell).

Other unique features of Nicaraguan recipes are animal innards such as tails, stomachs, brains, testicles, skin (particularly of pigs), feet, and even blood (to make the traditional moronga).

The inhabitants of the Central and Pacific regions of Nicaragua prefer simple gallo pinto (rice and black beans, fried in cooking oil) with either beef, chicken, pork or (particularly on the coast) seafood—alongside fried snacks and dairy products. Sample dishes include:

Indio Viejo is a thick chicken or beef stew, made with corn flour “masa,” garlic, onions, sweet peppers, tomatoes, and a squirt of sour orange. Use of achiote or annatto also gives the dish an inviting deep-orange color.

Caballo bayo is the Nicaraguan twist of Mexican fajitas: many ingredients typically served in clay pots, from which guests pick their favorites to make their own tortillas.

Local fish dishes such as guapote are typically seasoned while cooking with savory ingredients such as garlic, black pepper, cilantro, onions; but topped upon serving with sweet tropical fruit sauces that may include, say mango and tomatoes (as pictured above).

On the other hand, Nicaraguan food in the Atlantic coast is heavily influenced by Afro-Caribbean spices and flavors, particularly coconuts, chiltoma (sweet peppers) and chilies accompanied by roots such as yuca (like cassava), malanga.

Moreover, coconut oil is typically used for cooking instead of lard or cooking oil.

These combinations give ‘Nica-Caribbean’ cuisine a distinct flavor.

The most popular dishes on this coast include seafood: lobster, shrimp, crab, you name it.

When it comes to fish, it is eaten either dried, fried or in soups.

Rondón is a creamy coconut milk-based stew of turtle meat or fish with beef or pork, originally from the city of Bluefields.

It is seasoned with sweet peppers, chilies, onions, plantains, yuca, quequisque, and an herb named nargan.

We recommend you opt for the fish variety though, as turtles are endangered.

Gallo pinto con coco is just like the traditional Nicaraguan rice and black beans dish, but cooking oil is substituted by coconut oil when frying.

Likewise, pan de coco is bread whose flour includes ground coconut. It is the perfect accompaniment of rondón.

Gaubul is a traditional Caribbean-Nicaraguan drink, little known even in the Pacific coast of its own country. It is the mixture of cooked, mashed green plantains with fresh cow milk, coconut water, and sugar to taste.