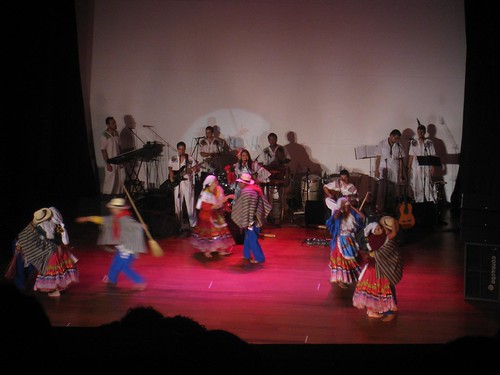 I took a taxi to Teatro Lido and found Jesusa at the back of the 2-block line.

She was with a German couple – Ann and Amu. Only Ann stuck with us for the free dance performance this Friday night.

Jesusa had referred to it as ballet, so I had contemplated skipping it altogether, but I am glad I went. 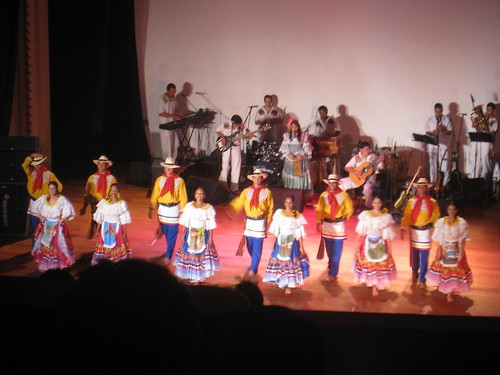 It wasn't what I expected at all. A seven-person band played music for a great dance troupe dressed in beautiful costumes.

The performance kept kept the 1,100 person capacity crowd entertained for an hour. I couldn´t believe it was free.

Between my time in Bogota and Medellin, it has become clear that the Colombian government, or at least the regional ones, are strong believers in offering everyone access to the arts.

After the show, I went with Ann by bus to the University of Antioquia, where we met up with Amu, Martin, another German studying abroad, and a group of Colombian students.

We walked through a crowd of students hanging out between two of the three large apartment buildings where many of them lived, to a corner which featured a popular bar and some small shops selling beer.

It is legal to drink outside in Colombia, as far as I can tell, so it was quite a scene. 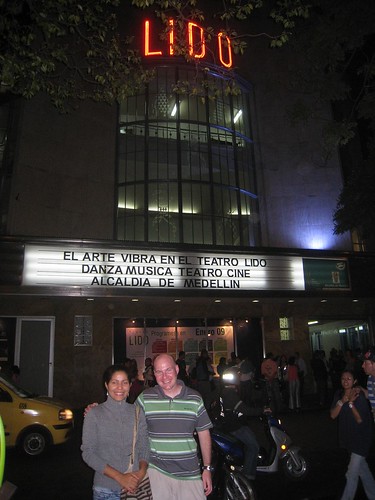 Outside Teatro Lido with Jesusa

At first it was a little intimidating to be amongst such a big crowd, but the longer I stayed there, talking with Martin, Ann, and Amu, while doing my best to remember any shred of Spanish, the more comfortable I felt.

It was college kids doing what they do anywhere in the world on a Friday night.

One of the students, Natalia, and I tried to talk via Martin who took on the role as translator.

She invited us out dancing, and Martin and I suggested Sunday afternoon over Saturday night, as we both planned to attend a Couchsurfing going away party. 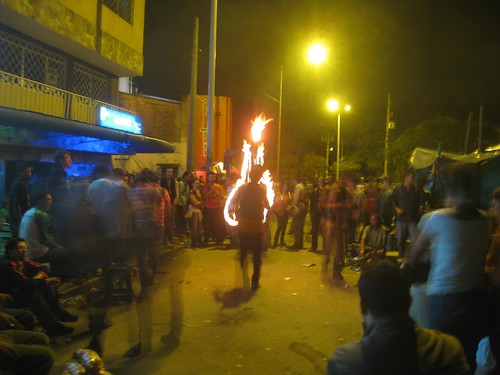 Friday night street performance near the University of Antioquia

Part of the allure of Medellin, and Colombia, is the music, and I´ve been exposed to a whole new world of music including salsa, meringue, and reggaeton to name a few.

It blares out of open air bars and restaurants during the nights, and from small shops during the day.

It surrounds you, and I find it infectious. No wonder everyone loves to dance down here!