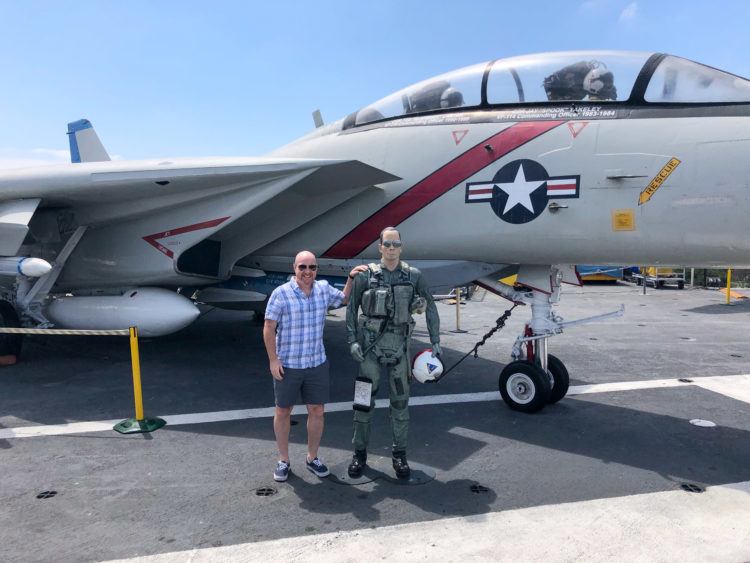 F-14 Tomcat on the deck of the USS Midway

Growing up in the northeast United States, California seemed as far away as Thailand the first half of my life. Much of what I knew came from skate videos and TV.

In 2010, I visited my friend Stephanie (Adventure Girl) in Los Angeles for a long weekend.

At my request, we went celebrity-spotting and visited famous spots including the Sunset Strip, Griffith Observatory, Beverly Hills, and Malibu.

It has taken me eight years, but I finally returned to California to explore another city I've long been curious about, San Diego.

Once again, I was able to stay with a friend, thereby saving money and benefiting from a local's knowledge of the city. To get around when he wasn't available, I used Uber.

Here are my top 10 things to do in San Diego, plus a few hostel recommendations if you don't have someone to stay with.

Anchored at Navy Pier in downtown San Diego, the immense USS Midway is a must-see attraction for first-time visitors of all ages.

Built over a period of 18 without the use of a single computer, it was the United States' longest operating aircraft carrier of the 20th century. It was in service from 1945-1992 and opened as a museum in 2004.

Adult tickets cost $21 online, and you'll want to allow at least a half day (3-4 hours) to explore this floating city, including the airplanes on the flight deck, control tower, and cavernous world below deck.

Among the many events hosted at the USS Midway, each year are Top Gun movie nights where viewers can watch the classic movie on the flight deck. I'd love to go back and experience that one day. 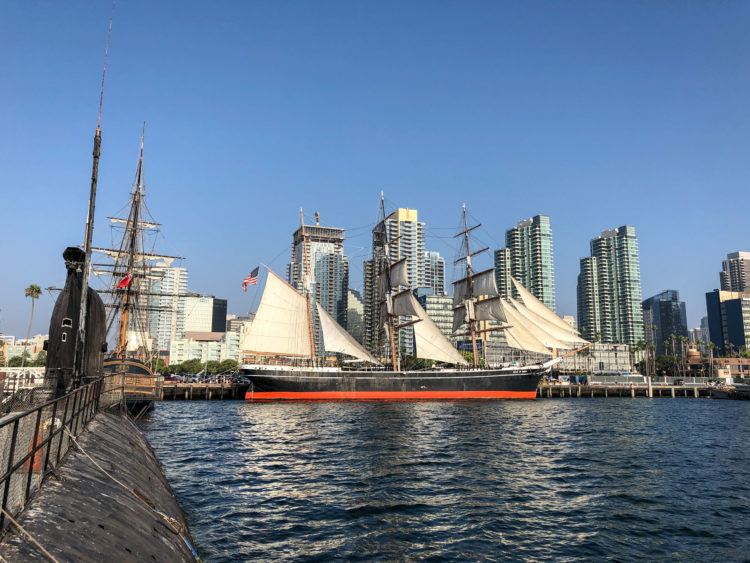 A few blocks north of the USS Midway is the Maritime Museum of San Diego; a floating museum made up of nine ships and two submarines.

I've never been on a submarine, so it was with great curiosity that I bought a ticket ($18 adults) and boarded the 300-foot Russian B-39 submarine which once carried a nuclear warhead as close to the US as Cuba during the Cold War.

The experience of crawling through the four large portholes of the diesel-electric sub was worth the price of admission alone.

Seeing the bunk beds just feet from torpedos gives you a sense of the confined living space and how uncomfortable it must've been to spend weeks at a time down there.

I also toured the USS Dolphin, an American research submarine which was far less interesting, and the Star of India, the world's oldest active sailing ship (built in 1863). 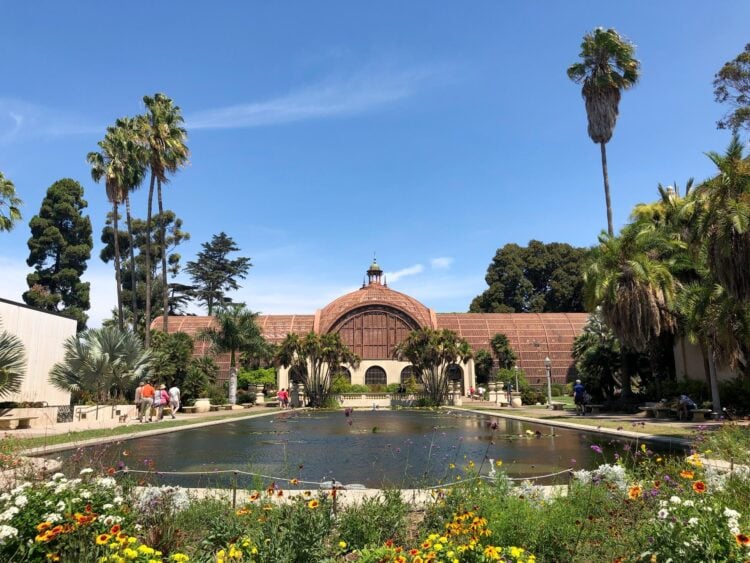 The Botanical Building at the heart of Balboa Park

Home to the world-famous San Diego Zoo, over a dozen museums, and many gardens, it'd be impossible to see it all in a single day, or even several days.

I began my visit to Balboa Park with a leisurely walk around the iconic Botanical Building.

I also visited the Timken Museum of Art (free) and larger San Diego Museum of Art ($15), before stopping for a casual lunch at Panama 66, which has a nice view of the latter museum's sculpture garden.

After lunch, I continued west to see the exteriors of the Old Globe Theater, San Diego Museum of Man, and California Tower.

Usually, I'd climb any tower for the view. However, I was getting the sense this could turn into a costly day if I didn't skip some attractions.

I walked through the Alcazar Garden and then headed south to the Japanese Friendship Garden which I had been looking forward to experiencing ($12 adults).

Full of bonsai trees, koi ponds, and waterfalls, it was an even more peaceful park within the larger Balboa Park.

There's much I didn't get to see, including the zoo and San Diego Air and Space Museum. Next time! 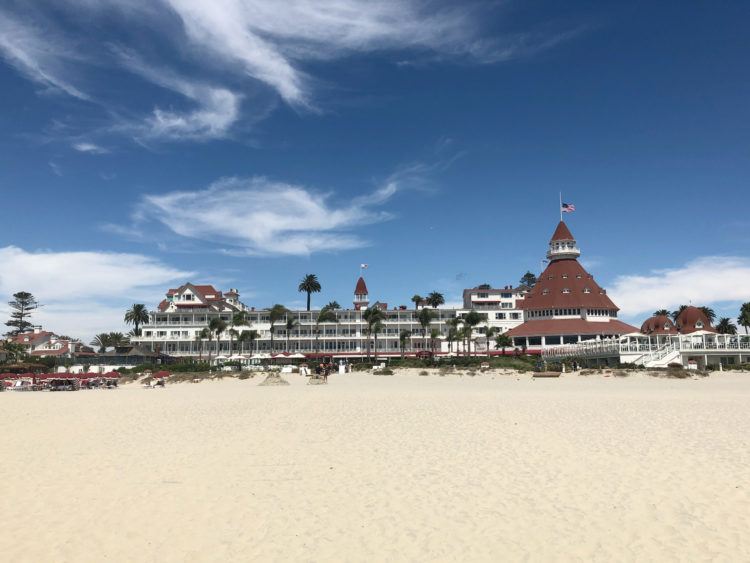 Opened in 1888, it has hosted multiple US Presidents, celebrities, and foreign royalty.

Just because it's beyond the budget of backpackers doesn't mean you can't walk around the grounds, including the center courtyard, and grab an ice cream, beer, or bite to eat.

The hotel also offers direct access to Coronado Beach, where you can go for a walk. 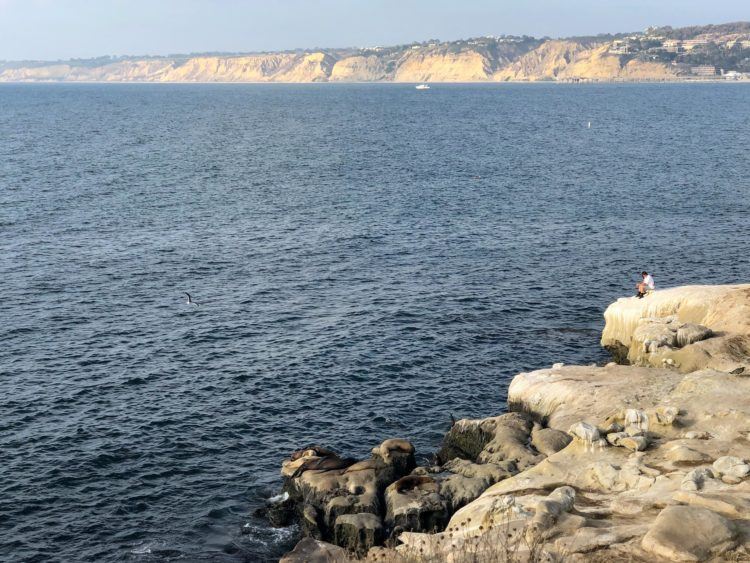 Swimming with sea lions in the Galapagos is a wildlife highlight from my years of travel, so I didn't want to miss the opportunity to see these marine mammals in La Jolla Cove.

I wasn't alone. Onlookers got up close to them on the beach, and along the sandstone cliffs. Knowing the constant attention probably stresses them out, I opted to give them their space. 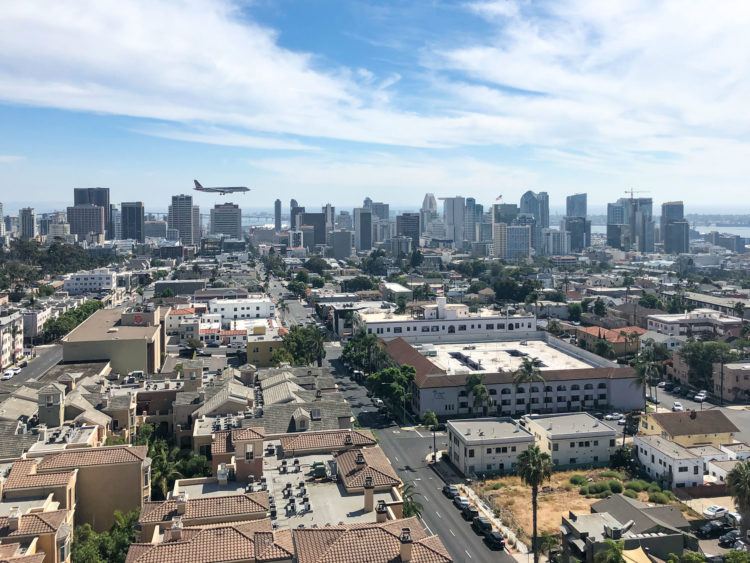 An American Airlines plane comes in for a landing

My friend Christine Amorose, a San Diego local, recommended I grab a drink at Mister A's for the rooftop views.

I expected a nice view of the skyline, however, I was surprised also to find you have a perfect look at planes approaching and landing at the airport!

The outdoor patio is well worth a visit. I dropped by mid-afternoon, which meant it wasn't crowded, but the sun was intense. Be sure to check the dress code on their website before you go. 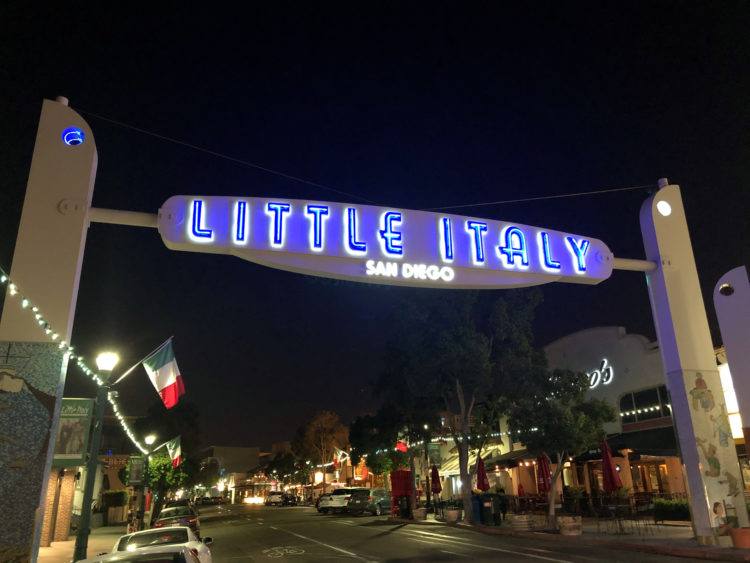 Located downtown, the historic neighborhood of Little Italy is at the epicenter of San Diego's dining scene, with restaurants like Born & Raised and Kettner Exchange attracting locals and visitors alike.

If you can't find a restaurant that appeals to you, go for a coffee and people watching or ice cream at Salt & Straw, the famous Portland ice cream shop. 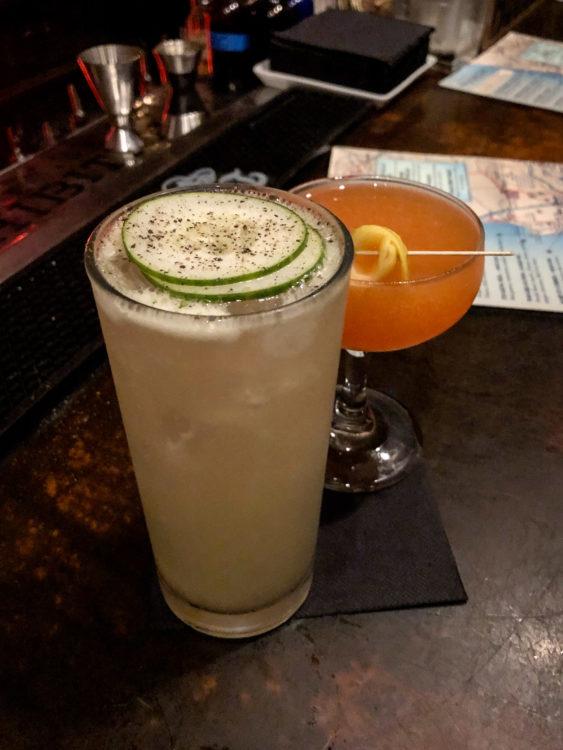 Once you've got your fill of delicious food in Little Italy, it's a short walk to the Gaslamp Quarter where bars and nightclubs draw everyone in for a drink (or three).

I only had one Saturday night in San Diego, and my friend made sure we took advantage of it by taking me to the Gaslamp Quarter for drinks, first at a rooftop bar, and then across the street at Prohibition, a 1920s-style speakeasy. 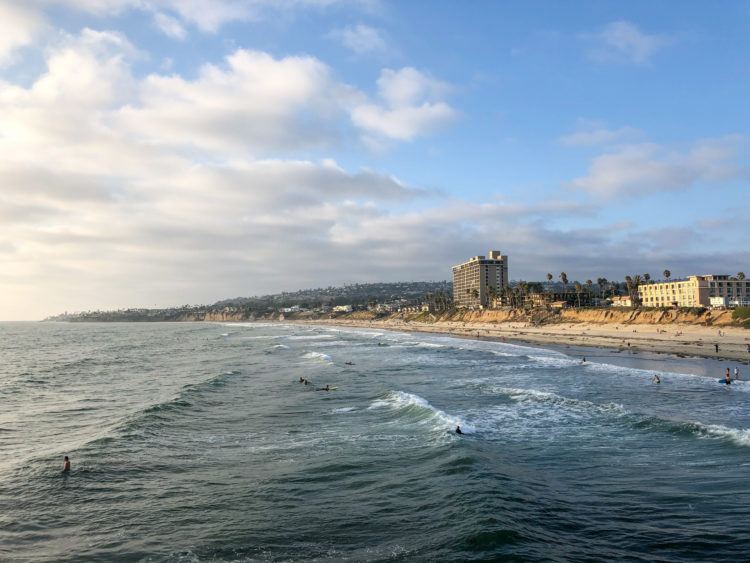 Beach culture is a big part of what makes San Diego an appealing place to visit and live.

There are plenty to choose from, and while I didn't go swimming (or surfing) during my stay, I did enjoy a walk down the Pacific Beach Pier and boardwalk late one afternoon.

For watersports fans, there's also the nearby 4,600-acre Mission Bay where you can learn or practice your stand-up paddleboarding, wakeboarding, kitesurfing, and more. Mission Bay is also home to SeaWorld San Diego. 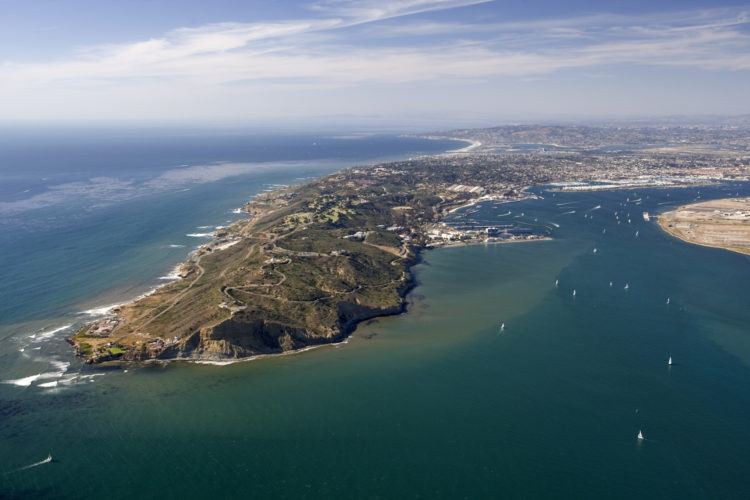 Further south along the coast from Pacific Beach and Mission Bay is the Point Loma peninsula.

Home to lighthouses, tidal pools, and scenic views of the sunset, it's most easily accessible via car, though public buses can also get you there.

For Top Gun fans, the new Point Loma Lighthouse at the very southern tip of the peninsula is where the scene with Maverick visiting Viper after Goose dies was shot.

The nearby cottages house members of the Coast Guard, so you'll have to view the whole complex from afar.

Where to Stay: Hostels

San Diego is a sprawling city, and while I stayed in the north with a friend, if I were traveling solo I'd have chosen a hostel near the beach or downtown. Below are my picks from Hostelworld.

Balboa Park was one of the coolest parks I've ever been to, highly recommended