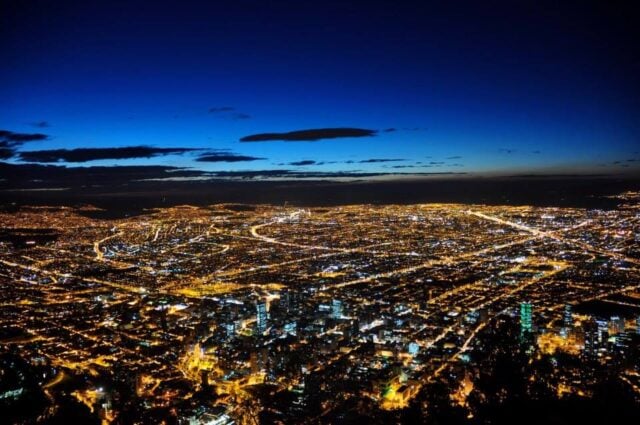 You hear people debate this all the time — Bogotá vs. Medellín — and on the surface, the answer seems easy.

Most foreigners and even more paisas, choose Medellín.

It makes sense. The warmer climate and slower pace of life tend to placate a majority of the people I talk to who live in or have visited Medellín, and anywhere I've gone those are qualities people tend to prefer, and I've been to 16 countries and 40 states in the United States.

I grew up in a small town in Hawaii but later lived in New York, not in the city but not far outside it and I spent a lot of time in the Big Apple, both during my time in the Empire State and every year that followed my departure, and if I had to choose between the two, I'd pick New York.

I love Hawaii, and Hilo will always be home, but the slow pace of life and flaky nature of many of the people gets to me, despite how friendly the people generally are.

Hilo and New York could be metaphors for what I'm about to write, but let's break down the variables that often determine the best place to live, starting with Part 1 of this two-part series, Bogotá vs Medellín: Culture, Dining and the Economy.

Before you continue, I have to warn you now: these posts will be complimentary and critical, equally for both cities, at least that's the goal and I'm not keeping score so if things lean a little more in one direction, that's by accident, not the intention.

The idea is to help you decide where to live — a big decision — based on the things you value, which is why at the end of each post I'll sum up what I've written with a recommendation. 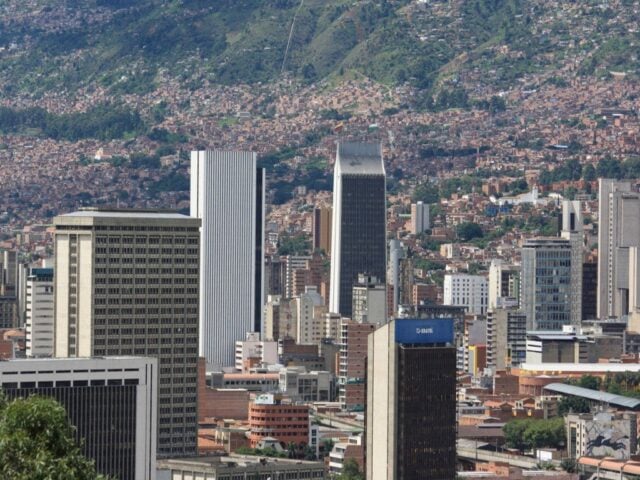 A view of downtown Medellín

Bogotá, so big with more than 10 million people in the metropolitan area, is not nearly as manageable as Medellín, a metro area of almost 4 million.

You'll notice the difference along the principal streets. Medellín has less trash lining its primary thoroughfares (although I've seen a bit of discarded garbage along the Río Medellín in the hillside slums).

Medellín does not have as much graffiti either, but a lot of the spray art on Bogotá's walls is quite creative, much like Valparaíso, a coastal Chilean city famous for that very reason.

If you compare the best neighborhoods in each city, they're very similar.

These areas have modern buildings, a variety of architecture, a strong police presence, many shopping options, lots of parks and trees, many bars, cafes and restaurants, and easy access to public transportation.

In Bogotá, you'll find this in the Chapinero, Chicó, Usaquén, Zona G, Zona T, and several others. In Medellín, Laureles and Poblado top the list.

I prefer a slightly cooler climate. I mean, you can always put on more clothes, but you can take off only so many, at least without being arrested.

Most people don't see it that way.

They prefer La Ciudad de la Eterna Primavera, or the City of Eternal Spring, Medellín's nickname. I'd argue it's not eternal. Each year Medellín gets a little hotter.

That means Bogotá has gotten warmer as well, some days even a bit too warm for me.

Overall, Bogotá is more expensive when it comes to three necessities: food, rent and taxis.

One of the places you will save money in Bogotá is dry cleaning, at least 20 percent, probably because there are a lot more people wearing suits, thus the energy costs are passed on to a bigger pool of people.

People in Medellín have a reputation for being extremely friendly, and I'd say that's more or less correct.

They love to socialize and are happy to welcome you to their city, to give you advice and if time allows and it often does, to show you around.

With all of that comes a downside, however.

The advice they give you isn't always sound advice. For example, they'd rather give you directions they are unsure of, and they often end up being bad directions, instead of telling you they don't know, because they often have too much pride to admit they don't know something.

This also means they don't know how to say no, even if they have no plans of coming through for you, hence the reason you often find yourself the victim of capricious promises, waiting for something that will never come, be it a date, a job, a meeting, anything really.

Trying to talk to paisas about this can be very difficult as well. Many of them have not been outside their city or region and, therefore, are ignorant to the other ways of the world, and are reluctant to accept even constructive criticism about their culture.

Bogotá is the opposite.

It's a very international city, so the people are more progressive. They tend to be more direct, more likely to follow through on their promises.

This city, of course, has its downsides too.

People here are busy and will often ignore you if you ask them for directions. Many of them don't care if you like their city either, don't care what you think about their culture, and they won't befriend you very quickly.

That means if culture were described as climate, the forecast in Bogotá would be slightly chilly in every way but with a chance for meaningful relationships if you can stand the initial cold while Medellín would be warm up front with a chance of rain to ruin your parade.

Being a more international city, Bogotá has more options to try foods from around the world. But Medellín is making things close.

As more foreigners move there, more types of cuisine are featured.

I guess you can't go wrong in either city if you're going out to eat. You'll just have more to choose from in you're in the capital.

As I said under the culture section, people in Bogotá are busy. It's a bustling center of commerce, full of cultures from around the globe.

You can find work in finance, health care, journalism, law, teaching, you name it.

Medellín has made strides as well, winning the 2012 City of the Year award from Citibank, the Urban Land Institute and the Wall Street Journal.

Some people feel Medellín is becoming another Silicon Valley with online entrepreneurs flocking there while job opportunities in the fields I mentioned above are growing as well.

Now, the bad that goes with the good.

In Bogotá, people are more impatient.

If you prefer to take your time, things can be tough here. You can get run over, figuratively and literally, if you don't work quickly.

Your boss and co-workers might not ask for something nicely all the time either, and they might even raise their voice, because work, and getting results, are the most important parts of daily life.

“People are not nice there,” people often have told me, and I see their point.

In Medellín, it's the opposite.

The culture, so relaxed and always trying to please, causes problems as well, especially when it comes to the old adage, “No dé papaya,” or, “Don't give papaya,” a phrase they use to explain why you shouldn't show off or give people a reason to rob you, or they will.

They use it so liberally in Medellín, it's hard to find a business partner you can trust, something I and many others — foreigners and paisas — have learned the hard way.

Even that big City of the Year award Medellín won was largely a popularity contest, an achievement the city earned by convincing its people to vote in droves during the first phase of the competition, before a panel selected the city as the winner among three finalists.

If you're looking for a place that's a true big city, a place that feels like an international hub, somewhere in which people are more accountable and direct and take their work very seriously, even though they can be a little cold, like the climate, Bogotá is for you.

If you're looking for a place that's not so overwhelming, that's a little warmer, both with the climate and the people, even though you might find duplicity behind the initial friendly demeanor, Medellín is for you.

But don't make a final decision just yet. Part 2 is on the way.

that's so tipical in paisas, always bitter and closed minded when it comes to their city, because let's be honest and call it as it is: Medellin is a small town!

I've read all the "article", if you can call it that way, and the conclusion is that it can not be more biased, the author is simply throwing guesses based on subjective judgments. At first glance you can see he doesn`t have any idea of what he`s talking about. From the text; "In Bogotá, you’ll find this in the Chapinero, Chicó, Usaquén, Zona G, Zona T, and several others. In Medellín, Laureles and Poblado top the list. ". WTF, are you serious? Is this an objective appreciation? Both, Laureles and Poblado are huge areas, with a lot of sub-areas, just to mention some in Laureles; La 70, la 33, la av. Nutibara, Primer y Segundo Parque de Laureles, la 80. Poblado; Parque del Poblado, Parque Lleras, Las Palmas, Rio Sur, La Strada. And besides this two main poles, you have barrio Colombia, Sabaneta, Envigado, Bello. All places with a great variety in entertainment and things to do, not just "neighborhoods". Another piece of your "master article"; " Trying to talk to paisas about this can be very difficult as well. Many of them have not been outside their city or region and, therefore, are ignorant to the other ways of the world, and are reluctant to accept even constructive criticism about their culture.Bogotá is the opposite. It’s a very international city, so the people are more progressive. They tend to be more direct, more likely to follow through on their promises". May I say, Hahahahahaha. So, Paisas had never been out of "this town", you have to come here, and spend a while, year to year we commonly travel to all kind of destinations, all over the country and the world, don`t be so ignorant. And all the time we receive more foreigns than any city in Colombia. And you say Bogota is more "international"? Dude, you have to check over your sources, I am talking about things that are perfectly quantified and classified, not just guessing like you. Use Google, is your friend. If you like more Bogota than Medellin, I respect that, what I do not tolerate is misinformation, and that is what you are doing writing this shit. Have a nice day.

Hi Juan, thanks for taking the time to share your perspective on Ryan's article.

"And all the time we receive more foreigns than any city in Colombia. And you say Bogota is more “international”? Dude, you have to check over your sources..."

While I don't agree with all of the author's opinions (Bogotá is much colder and more expensive than the author lets on), I do agree that Bogotá is a more cosmopolitan city than Medellín.

When it comes to international visitors, Bogotá leads Colombia by a wide margin, receiving a little over 50% of the total international visits to Colombia. Cartagena is second at 11% and Medellín third at 10%. This breakdown is based on tourism statistics from the Trade Ministry from 2006-2011.

And this shouldn't be a surprise. Bogotá is the political and business capital of the country and far larger transportation hub, especially for air travel, than Medellín.