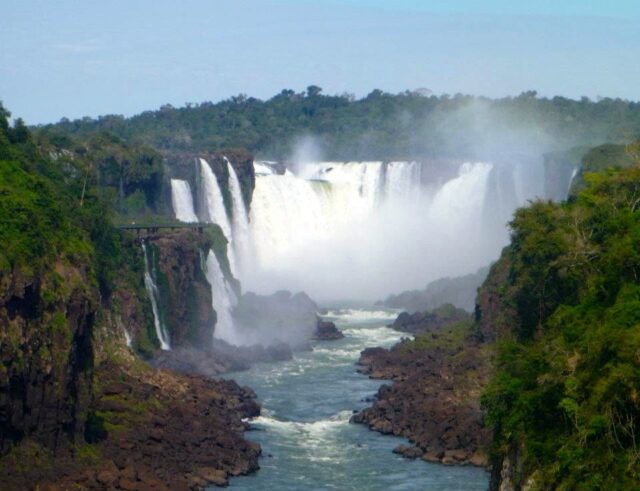 Devil's Throat, from a distance

The problem when you travel to Argentina is time. It is such a big country, with beauty in the north, south and everywhere in between.

A friend went recently and saw the northern half, and that reminded me of the trip I made a couple of years ago.

That meant a trip to Iguazú Falls. You can easily argue that it's the most beautiful natural attraction in the northern half of the country.

There are two sides to it, the other being in Brazil, a side I saw from a distance but never visited in person. I did not have a Visa then, something Americans need to enter Brazil. 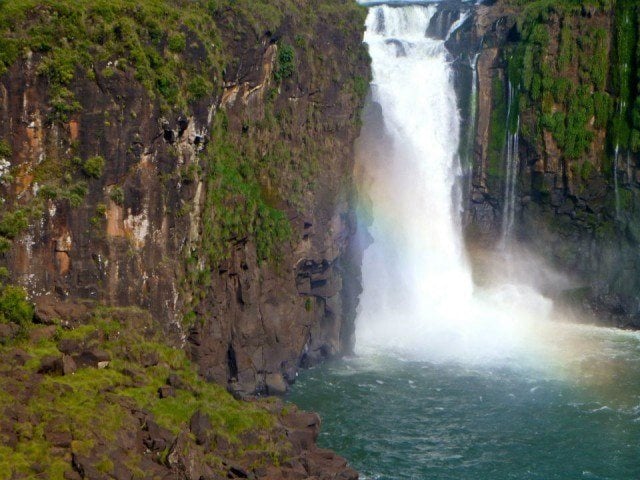 A rainbow forms in front of one of the falls.

No matter. Everyone I met on my trip who went to both sides said the Argentine side is much more majestic. There's just more to see, they assured me, and I later read that they were right, that 80 percent of the falls are in Argentina.

I spent an entire day there. They said they needed only a half day to see the falls in Brazil.

I took a quick bus ride to get to the park, maybe 20 minutes. To enter I paid 160 Argentine pesos, which at the time was about $40 but today is only $18.40. I've read it now costs 215 pesos (about $25) for non-Argentines to enter. Americans traveling there this year can thank President Cristina Kirchner for that.

It's a heck of a big park, 212 square miles, or almost three times the area of the city of Buenos Aires.

As I traversed the trails of the park, I got to know a cool traveler from Canada during my day there, a guy named Raymond. You might remember the name. I referred to him when I explained how I decided to go to Salvador, something you might have read about in the second segment of this post. 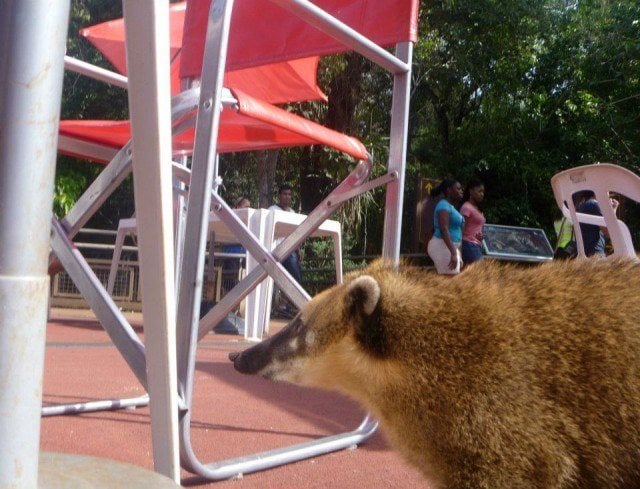 This coati tried to steal my empanada while I was taking its picture.

Before we even got to the falls, we stopped to get some food and noticed all the coatis near the snack bar. They're part of the raccoon family, something easy to surmise just by looking at them, and one of those furry bastards jumped up on the table and tried to steal my empanada.

We quickly scared it away.

A moment later, we looked toward the trail leading to the snack bar and saw a foreigner girl feeding them. Signs throughout the park tell you not to feed them. Or maybe the signs say not to pet them. Either way, we shook our heads and moved on.

We saw some lovely birds along the way, and while we appreciated them, we were getting antsy to see the water gush from the Paraná Plateau.

Eventually, maybe after 45 minutes when you factor the time we took to eat and fight off the coatis, we got there. 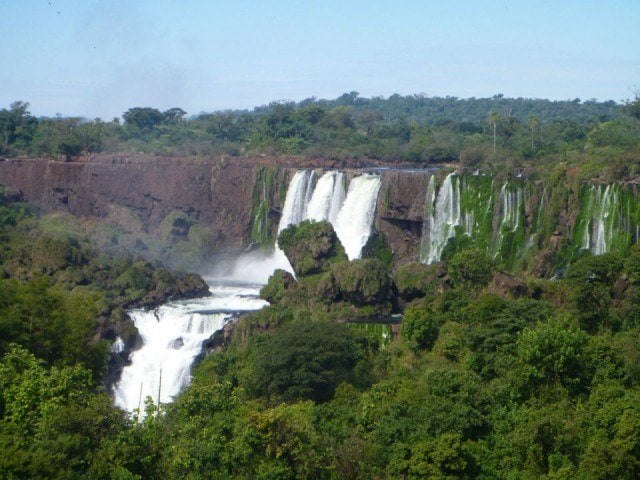 We knew we were getting closer once we saw this from a clearing in the trail.

We were in awe. I don't remember what Raymond told me exactly, but for me it was the biggest collection of falls I had ever seen.

The jewel of it all is Devil's Throat, where the falls form the shape of a U and plummet toward the river below. You can take a train there or walk, and we chose to walk because we were in no hurry.

We took our time at Devil's Throat as well, partly because we had to, with all the tourists there, jockeying for space to take a picture. 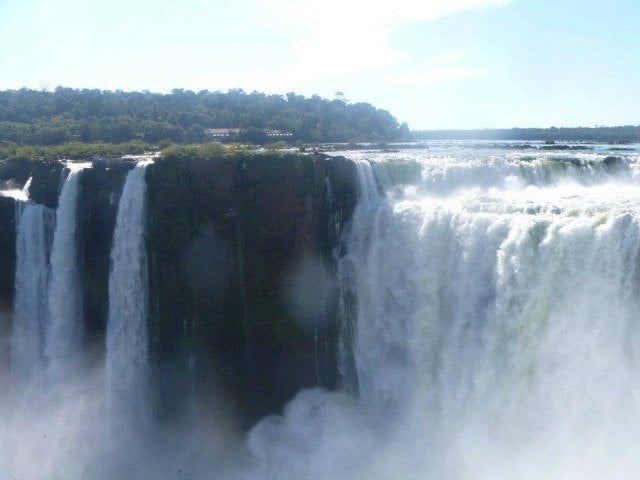 The rest of the time, we just stood and stared, and stared some more.

I read somewhere that a guide used to take people to the edge of the falls in a little boat, maybe close to a hundred years ago. One day lost his fight with the inertia of the water. The tour was discontinued after their deaths.

There is still a boat, this one with a motor, but it only runs in the water below the falls, and doesn't get too close. Close enough that the falls spray you with mist, but that's it.

We got back to the park entrance around 4 p.m., and you could see the day waning, something I had gotten used to since it was May, almost winter in the southern hemisphere.

As I waited for the bus, I saw a toucan fly overhead. That beautiful bird probably doesn't realize how lucky he is to get an aerial view of the falls whenever he wants.

Iguazu falls one of my favorite places traveled ever. Such a beautiful piece of nature.

Wow! The Iguazy Fall looks amazing but I got to say that my favorite photo was the one with the coati!