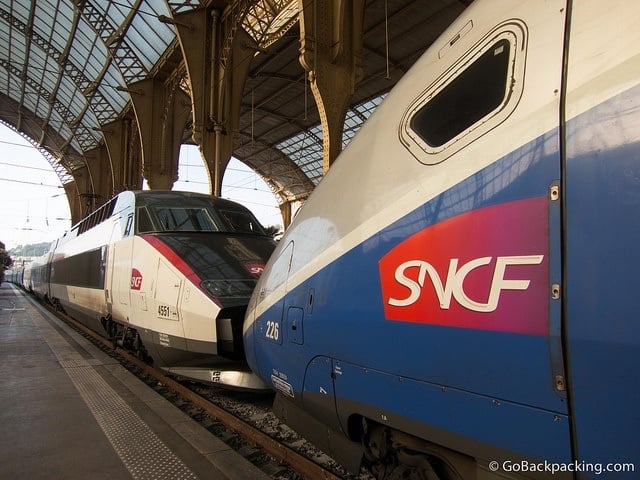 Last Fall, I set off from Munich, Germany on a two-month train trip through Europe, armed with a 15-day Eurail Global Pass.

My goal in partnering with Eurail.com was to answer the question on every budget traveler's mind, “how much money can you save by buying a rail pass versus paying for tickets individually.”

The results from my Eurail cost comparison confirm without a doubt that there are hundreds of dollars to be saved, even thousands depending on the routes you choose.

Before we continue, please note all prices are subject to change, both for the rail passes and the individual train journeys.

The costs in the chart below are based on October/November 2012 rates. 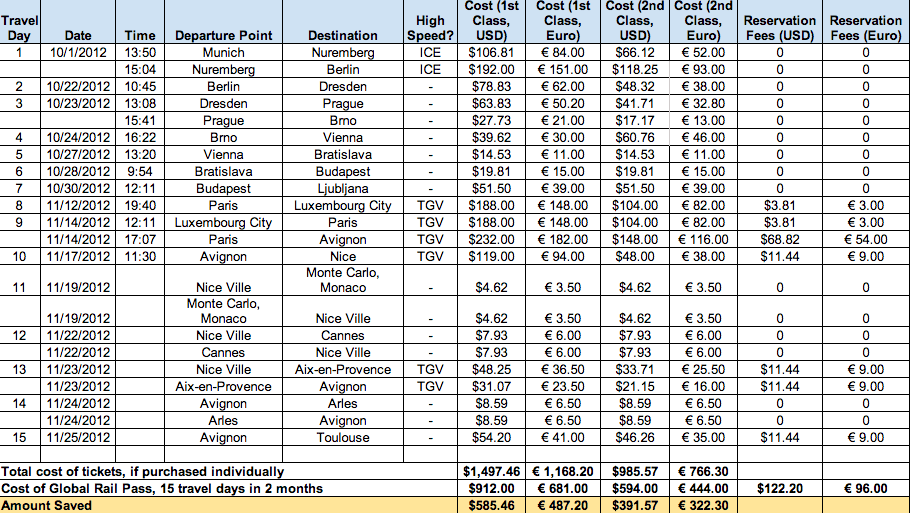 Even though I was traveling with a 1st Class pass, I wanted to make this information relevant to travelers under the age of 26, and thus included the costs for a 2nd Class pass and individual tickets as well.

In the last two columns, you'll also see reservation fees in both US Dollars and Euros.

As you can see, if I'd purchased 1st Class tickets individually, I would've paid $1,497.

For you young folk under 26, there's good news too.

My experience shows a cost savings of $392 between individually purchased tickets and the cost of a 2nd Class rail pass.

I used my pass in a variety of ways, from the high-speed ICE trains of Germany to the older trains of eastern Europe. 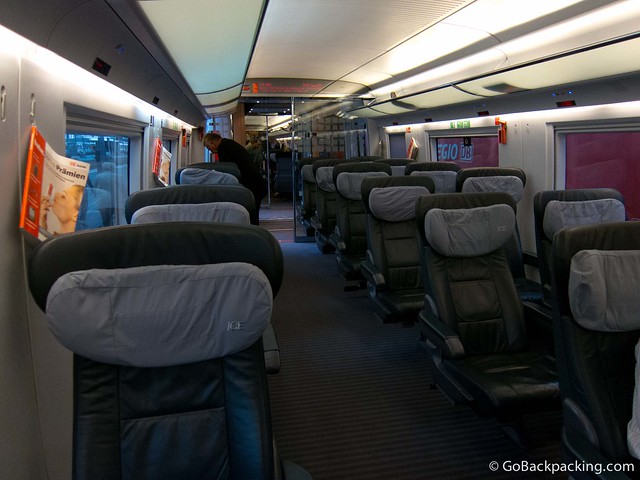 How to Maximize Your Savings

Fourteen years earlier, when I first used a rail pass to travel through Europe, I wasn't concerned with maximizing my savings, only getting from one major city to the next.

In 2012, that was still my primary concern, but I was more conscious of the money saved during each leg of my trip.

Due to time constraints, and my chosen itinerary, I didn't squeeze the most value of my rail pass that was possible. If that's your goal, here are the best ways to do it.

Hands down, this is the best way to get your money's worth, and quickly.

My ICE train from Nuremberg to Berlin alone had a value of $192!

String a few of those together around Germany, and your Eurail Global Pass has more than paid for itself. Also note, I didn't have to pay any reservation fees.

France was a different story. I ended up taking more rides on their TGV routes, which also cost quite a bit.

Paris to Luxembourg City, a journey of fewer than three hours, cost $188 each way, or $376 round trip.

Unlike Germany, the reservation fees can add up in France but are still a small price to pay compared with the regular cost of tickets.

In addition to getting the most out of your rail pass, you're also cutting down on your transit time between destinations. 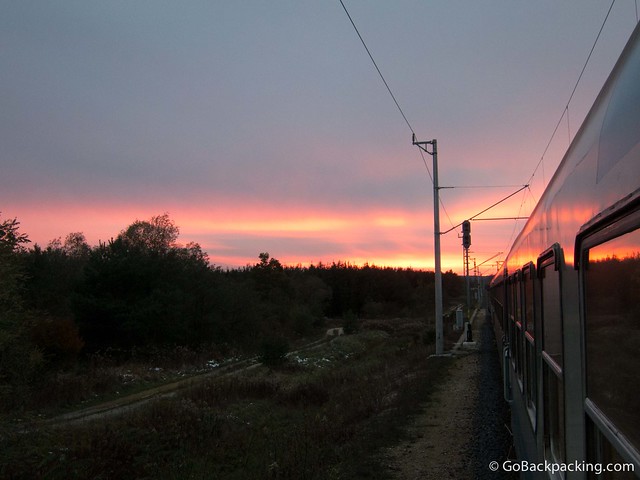 Sunset on the train from Budapest to Ljubljana, Slovenia

While I didn't take any overnight trains on this trip, I did so in 1998, and it can be an easy way to 1) cover a lot of ground, and 2) save on a night's accommodation.

I don't know if overnight trains are as popular in Europe as they once were, with the rise of discount airlines, but it continues to be an easy way to get the most mileage from each of your rail pass travel days.

I know I just wrote about how amazing it is to travel by high-speed rail, but if you're really trying to keep costs to a minimum, avoid the train routes, such as the TGV lines in France, where you'll be required to pay reservation fees.

I was paying $11 per train ride in the south of France, which can add up quickly if you're doing a lot of short trips.

In Aix-en-Provence, I made the mistake of exiting my train thinking there'd be storage lockers for my luggage, allowing me to visit the city as a day trip.

Wrong. Even seemingly popular cities such as Aix-en-Provence, Arles, and Avignon lack storage lockers at the train stations. Nice, thankfully, had a left luggage service though I didn't need it there.

Once I'd gotten off the train, I had to pay another reservation fee of $11 to continue the final 20 minutes to Avignon where I planned to spend the night. An expensive mistake.

Eurail.com offers tips on how to avoid reservation fees by taking alternate routes. 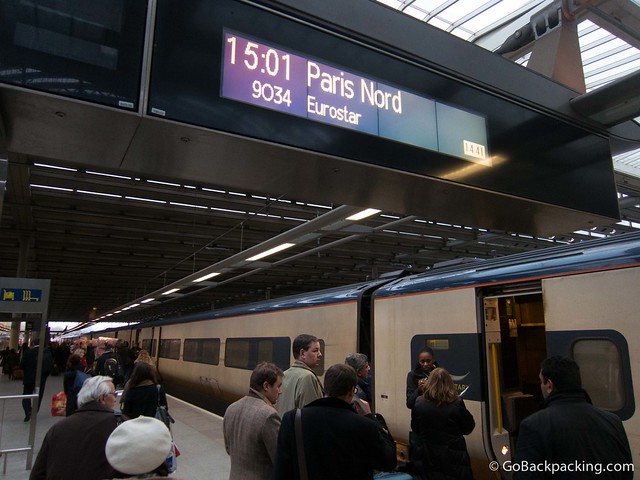 Preparing to board the Eurostar train from London to Paris

4. Take advantage of special discounts on Eurostar, ferries, and more

While my rail pass didn't get me free passage on the Eurostar train from London to Paris, it did allow me to get a discounted rate of $91 for a 2nd Class ticket (bought the same day, which turned out to be very lucky).

Because I don't like to make plans in advance, I often showed up at the rail station expecting to board the next train to my destination.

Unfortunately, certain routes are so popular, that's not a reasonable expectation.

I made it from Luxembourg City to Avignon in southern France in a single day, but without having made advance reservations from Paris to Avignon, I was left semi-stranded.

I could either spend the night in Paris or pay a discounted rate for the same-day ticket to Avignon.

I chose to take advantage of the 50% discount my Eurail pass afforded me, paid $69 and boarded one of the last TGV trains from Paris to Avignon that day.

In addition to discounts off regular train tickets, you can save on ferry rides between Italy and Greece, and within the UK and Scandinavia.

As you can see in the chart above, I used my rail pass travel days on some super cheap day (under $10) trips to Monaco, Cannes, and Arles.

I let my itinerary guide me and wanted to maximize the use of my travel days.

If things were different, I would've paid for those cheap tickets out of pocket, and left the travel days for the long, expensive trips instead.

Putting all the practical benefits and cost savings aside, this second rail trip through Europe reminded me of how much fun it is to travel by train. And I won't be waiting another 14 years to do it again.

Visit Eurail.com to find the rail pass that's right for you.

SCORE! I just bought a 15 day global pass for my Europe adventure after I finish up my 3 month exploration of Southeast Asia! Eager to rack up the savings and new sights. Thanks for the wonderful post and all the detail.

Awesome AJ, you're going to have a great time in Europe!

Trains are great ways to enter a country. Not only its a little different but also you can see the countryside.

Trains are defiantly a cool way to see a country. I'm trying to visit in the next few years before I turn 26 so I can take advantage of the discounts. I wish train travel in the US wasn't absurdly expensive.

The thing is, western European train fares now work like budget air fares. For example, Paris to Amsterdam starts at €35 one-way and rises to €130 as departure date approaches.

Comparing the cost of a railpass only with the most expensive fully-flexible on-the-day top-of-the-range point-to-point price level doesn't give a balanced picture.

All of us Europeans book in advance now and travel cheaply, just as you do with airlines. Booking usually opens 92 days ahead, and you only pay full-price if you suddenly need to go somewhere at short notice (usually on business, with the Company footing the bill!)

We simply don't expect to pay the fares you quote as the point to point fare, just as no-one really expects to pay $3,000 dollars for a flight from New York JFK to London Heathrow (the full-fare economy return rate that you'd pay at the airport if you simply rocked up and asked for a ticket for the next flight) We'd all expect to pay what, $300-$500 for such a flight.

As a European, I'd expect to go online to https://reiseauskunft.bahn.de/ in advance and travel from Munich to Nuremberg or Nuremberg to Berlin for €29 or perhaps €39 in 2nd class, €69 or €89 in 1st.

Railpasses are the gold-plated option that give you unlimited travel with freedom and flexibility, at (often, but not always) less than the walk-up on-the-day price.

That can be wonderful, and might be just what you want. It can be fantastic. But it's not the money-saving option. That freedom costs you money.

If you want cheapness for a pre-planned itinerary, you should go online and book Europe's new 'budget train fares' direct with the relevant operator, just as you would book travel by budget airline.

The problem is, overseas-based travel agents get double-digit commission on a high-value railpass, just for handing a piece of card across a desk. Versus using an expensively-installed reservations system to sell a €35 ticket from Paris to Amsterdam on which they might get 9% commission. So they'd rather you didn't know about these.

Incidentally, if we're talking Paris-Amsterdam, on which €35 fares are easily available at a month or two ahead, the railpass reservation fee is €39. So even if you've already bought your railpass, it's actually cheaper to bin it, and buy the €35 ticket including reservation, instead of the €39 passholder reservation fee. Especially as the €35 ticket can be bought online with no fees, but the €39 passholder fee can only be bought from an agency who will add what, another €10 in fees for selling it to you.

The moral is, buy a railpass with open eyes. Check the cost of budget train fares in advance direct with the relevant European rail operator (NOT with a third-party reseller agency), and if you're prepared to book in advance, no refunds, no changes, that is the budget option.

Thanks for your feedback Mark, you make a lot of valid points, and I didn't realize the costs could be so much cheaper if you book well in advance.

Maybe it's because I first used a rail pass when I was 21, but to me the ease of use and ability to change my mind on a minute's notice, is worth paying a somewhat higher cost.

There are all sorts of backpackers, some who will plan their first trip to Europe meticulously, and others who prefer to fly by the seat of their pants. At the least, a rail pass is likely to save the latter group money.

This is helpful, thanks. I traveled in France and Spain a couple years ago and spent a lot of energy comparing options (and remembering the grand old days of cheap Eurail youth passes with unlimited travel and no reservation fees). In the end, we knew our route and booked directly online. With SNCF, being able to understand enough French to navigate the website allowed us to book. some really cheap tickets (like $17 from Perpignan to Paris on the TGV) by being flexible in our advanced planning by a day or two.