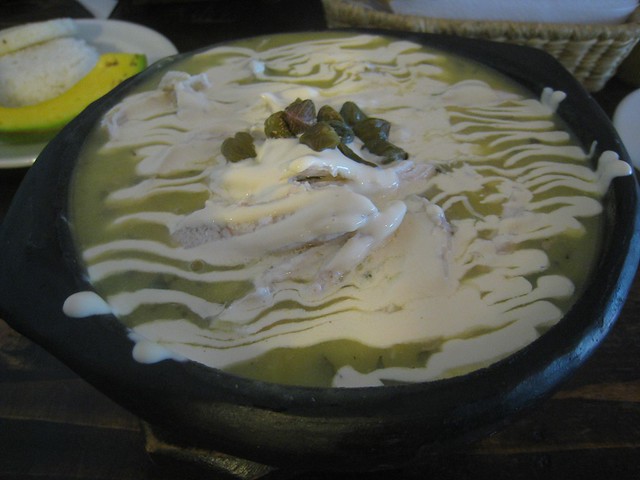 Colombian food is typical of Latin American cuisine as a whole.

There is a heavy focus on deep-frying everything. Meats (beef, pork, chicken, fish) are popular, and most dishes are served with rice, beans, or potatoes.

Vegetables play a small role, while the variety of fresh tropical fruits available in Colombia is extensive.

Ajiaco is a heavy, potato-based soup that is especially popular in and around Bogota.

Additional ingredients include shredded chicken, small chunks of corn on the cob, capers, and cream.

Ajiaco is typically served with a side of rice and fresh avocado, which are then be added to the soup.

Where to Eat It: Just off Bogota's Plaza Bolivar is a small strip of Ajiaco restaurants, all claiming to have the world's best. Pick one, and prepare to fill your stomach with the best soup in Colombia.

Arepas are the most ubiquitous Colombian food – served with almost every meal, and when bought on the street (for $1), a meal unto themselves.

Made of ground corn dough or flour, arepas con queso (with cheese) are best sampled from street vendors.

Preparations vary by region. For example in Medellin, you can expect to have sweetened condensed milk drizzled on top, which offers a sweet counterbalance to the saltiness of the cheese.

Where To Eat It: Everywhere, however Medellin has the best!

This bigger than life dish is hard to finish, and probably contain's a month's worth of cholesterol.

Where To Eat It: Bandeja Paisa is best sampled in the state of Antioquia. In Medellin, head for Brasarepa Restaurant in Envigado, where Anthony Bourdain filmed a scene for the Colombia episode of No Reservations.

Empanadas are perhaps the most popular Colombian food.

They are available everywhere, from street vendors to cafes, and restaurants, and are usually fried, though cafes may offer baked versions as well.

The most common filling is meat (ground beef), though chicken is also widely available. Best enjoyed with a dollop of fresh salsa, which is often provided by the vendor.

Where to Eat It: Everywhere!

Mondongo is another heavy soup, especially popular in Medellin.

The base is chopped tripe (stomach lining or intestines) in a broth, however, it is always served with accompaniments for mixing, including rice, avocado, bananas, and fresh cilantro.

Where to Eat It: Mondongo's is a popular restaurant chain in Medellin that specializes in this hearty Colombian food. There is a prominent location on Calle 10 near Parque Lleras in the Poblado neighborhood.

Trucha is a type of fish, often served in Colombia's pueblos.

Most restaurants will offer a variety of preparations to choose from, and it's typically served with a large, fried plantain.

Where to Eat It: Trucha is best experienced in the pueblos of Colombia, such as Salento, or at a trout farm in Jardin.

Aguardiente (or guaro as the locals call it) is a clear, anise-flavored (black licorice) alcohol that is available throughout the country.

Inexpensive, and according to the locals, less likely to give you a hangover compared to other liquors, it is usually consumed straight and chased with water.

Small plastic cups are used for dishing out shots of Aguardiente, and it's common for Colombians to offer the drink to new friends in the bars and clubs.

Where To Drink It: Any Colombian bar or discoteca, or buy a bottle from a convenience store and enjoy it with friends outdoors (drinking in public is legal in Colombia).

Colombia is famous for its coffee, and whether you drink it regularly at home or not, be sure to sample it while visiting the country.

Tintos are very small cups of coffee that are often sold on the streets, out of thermoses.

Sometimes you'll see vendors rolling shopping carts with a dozen or more thermoses around, trying to keep up with demand.

The chain of Juan Valdez Cafes is the Colombian equivalent of Starbucks and offers free Wi-Fi to customers.

Where To Drink It: Everywhere! Sample the typical tinto from a street vendor, an iced coffee from a Juan Valdez Cafe, and from the source, on a coffee plantation in Colombia's Eje Cafetero.

Blessed with a wide variance of climates, all within the same country, Colombia's selection of tropical fruits is off the charts.

And that most can be ordered in the form of fresh fruit juices, for no more than a dollar or two, makes sampling them all a pleasure.

The most commonly available fresh fruit juices (made with water or milk) are:

Where To Drink It: Everywhere, but especially along the Caribbean coast and beaches.

Hot chocolate and cheese might seem like an odd combination, but this typical Colombian food combination is surprisingly delicious.

Traditional Colombian hot chocolate is made without added sugar or milk, as is common in Western countries.

Drop in pieces of large cheese, and allow them to soak up the flavor for a minute before fishing them out with a spoon.

Where to Drink/Eat It: Look for it on the menu at restaurants, or if you hike or go horseback riding in the Valle de Cocora, order it at the rest stop where you can watch the hummingbirds.

The 138-page, all-original Medellín Travel Guide by David Lee is available for Kindle and PDF.