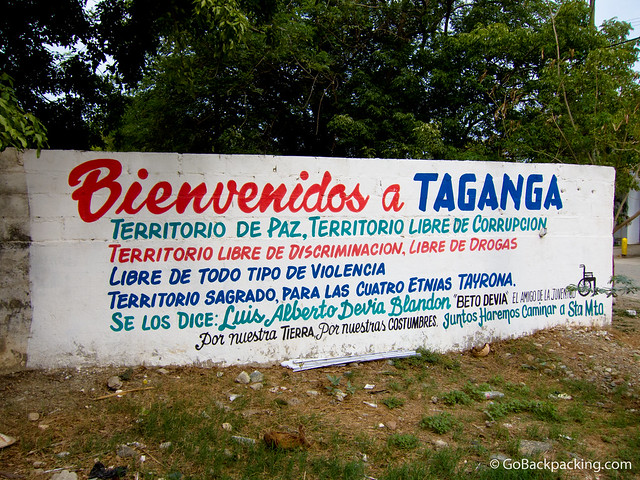 Welcome to Taganga: land of peace, and free of corruption, discrimination, drugs, and violence.

It was obvious when I awoke my first morning in Taganga, a small fishing village on Colombia's Caribbean coast, that the beach would not be joining the illustrious list of other tropical paradises I've been lucky enough to visit.

The heat and humidity had me sweating from the moment I stepped off the plane, and that was after the sun had already gone down.

I'd spent the first night in a 6-person hostel dorm room, and by the following morning, was ready to find myself a private room within reach of a sea breeze. 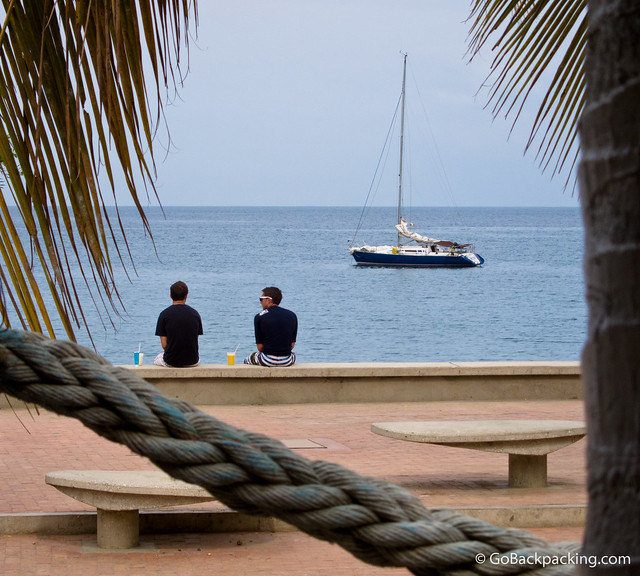 In the same way Koh San Road in Bangkok looks hungover every morning as the streets are cleaned of the garbage produced from the partying the night before.

I sat down in one of the few restaurants that were open for breakfast and took a look around.

A couple of travelers were hanging out by the beach, drinking fresh tropical fruit juices. I guessed they were up early to go diving.

There were lots of dive shops, as Taganga has a well-deserved reputation for being an inexpensive place to get your PADI certification.

My friend Marcello from Wandering Trader got his certification there a month or so earlier. The cost for open water certification is about $250 – $300. 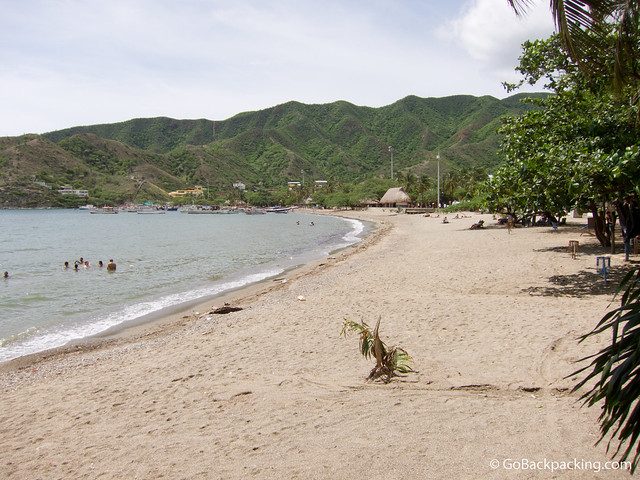 Taganga's beach looks much more appealing when the sun is shining.

The beach itself was small.  But the surrounding mountains were not covered in the lush jungle as I imagined.

It appeared more like scrubby bushes. It felt dry and desert-like.

The beach was dirty, yet served its purpose for allowing visitors to sunbathe.

I wondered if this was what it was like in February 2009, when I'd met a group of Irish backpackers in Barranquilla who'd spent an entire month in Taganga. Because I didn't see the appeal.

Maybe the beaches of Thailand had spoiled me, or my expectations grew out of control over the two years it took me to finally visit.

Whatever the case, I was disappointed with what I found, though there were a few silver linings. 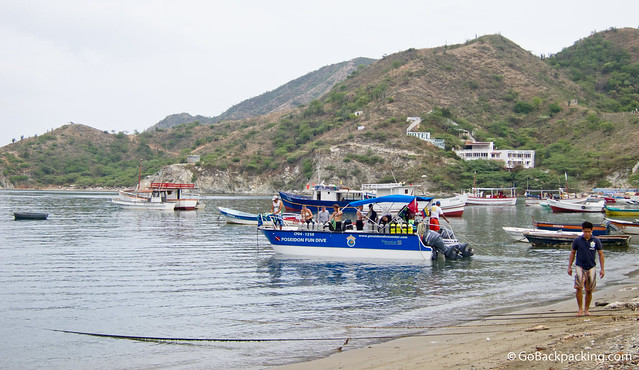 A dive boat in Taganga prepares to take a group of scuba divers into the sea.

What the village lacks in terms of daytime atmosphere, it makes up for at night with beach bars and a few discotecas.

It turns out the nightlife is better in Taganga than Santa Marta, which doesn't say much for the latter.

I went out dancing at discoteca Sensation one night, and it was bringing in a mixed crowd of Colombians and foreigners.

Go for a few days to get certified, and then get the heck out.

That said, there are plenty of other inexpensive places in the world to get certified, and they offer much prettier beaches (and I bet much clearer views underwater too).

Gili Trawangan and Koh Phi Phi come to mind if you want to go diving in Southeast Asia.

Base camp for exploring the region

Taganga may not be an idyllic beach, but for many, it will hold more appeal than staying in the nearby city of Santa Marta.

You can book the same activities from either location, including transport to Parque Tayrona, treks to Ciudad Perdida (The Lost City), and package trips to La Guajira.

Available at all the restaurants. I highly recommend the pargo (red snapper) if available.

We were going to stay in taganga. Hoping to visit a few places like minca santa marta and tayrona park. With our son age 7 .. Would u say taganga not the place to stay with a child ???

Well so far I'm loving the diving here around cartagena. ..goin to explore to taganga..regardless kinda got a see for myself ..I've been spending winters in canoa ecuador , very tranquil little surf town with an amazing beach....def not as happening as montanita. If your looking to chill and learn to surf , the beach in canoa is epic...18 km of continuous playa...amazing... If you plan to stay for a while check out the coconuthotelcanoa.com. ..

He Dave, first of all i'd like to know where are u from? Im telling you that I just visited Taganga yesterday, and you know I also got dissapointed with that town (im colombian). I teally expected other stuff as paradisiac beaches and stuff like that but I found dirty and cold beaches, lots of people and annoying sellers. By the way tomorrow Im going to Tayrona Park and my expectation is quite high. I know it must be much better than Taganga. Actually i dont recommend Taganga, but also i know that os really sad because it could be better but they have all of those troubles that you all have mentioned. So i'll tell how was Tayrona park and Cabo de la vela where im going as well!

I'm from the USA, originally New York. Thanks for sharing your thoughts. I agree it could be a lot better. When I visited the surf beach of Montanita in Ecuador last year, I felt like that's what Taganga could be like, but alas, the vibe around dive sites isn't the same as surf beaches.

Tayrona Park is beautiful, and Cabo de la Vela in La Guajira is worth the effort to get there. Enjoy!

PLEASE Help!!!! I am a student of the Master in International Tourism at the University of Lugano, and I need your help for my Master Thesis. I am analyzing the potentials of Colombia as a new, successful destination for backpackers. I believe this Country may represent the perfect destination for this kind of tourism thanks to his natural and cultural diversity.

If you have ever backpacked Colombia, I would kindly ask you to complete this short survey. http://fs25.formsite.com/spug/form1/index.html?1355301060030

Avoid Taganga and enjoy a much better places in S.Marta like B.Concha, 15 min ride from S.Marta's Bastida, or get to Cinto, playa Cristal, Chengue probably some of the nicest beaches in S.America...also Los Angeles, Valencia waterfalls up to the paradise of Palomino, Kms of empty, white beaches from where you can see the snow capped of the sierra Nevada, Santa Marta has a unique ecological conditions that cannot been realy enjoyed from Taganga where even the hotels keep the secret and do not say anything to tourists...