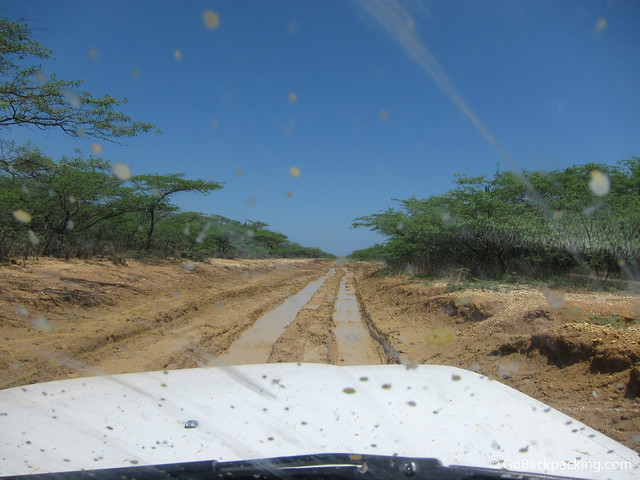 I fully expected us to get stuck on the muddy, rutty riverbed road into the La Guajira Peninsula.

We were three hours northeast of Santa Marta and an hour or so beyond the coastal city of Riohacha.

The further north we pushed into Colombia's very own desert, the lower the green foliage stood.

Maybe it goes back to the images of Romancing the Stone I grew up with, but my picture of Colombia was always the opposite: lush, wet, jungle.

But like the safety situation, the geographic diversity of this South American country has a way of breaking stereotypes. 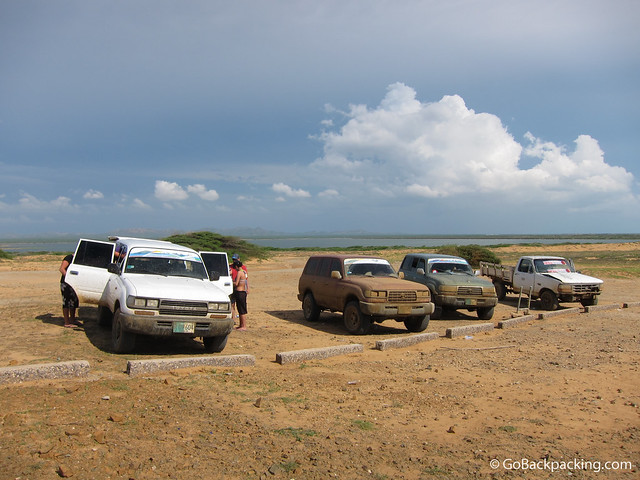 La Guajira Peninsula is the northernmost region of Colombia and the whole South American continent.

Despite an apparent lack of life, this barren desert is home to the indigenous Wayuu people, of which there are approximately 144,000 across 4,000 square miles.

The Wayuu are renowned throughout Colombia for their weaving skills.

Mochilas are woven bags that are commonly carried by both men and women, and those made by the Wayuu can easily fetch 2-3 times the regular rate in the big cities like Medellin and Bogota. 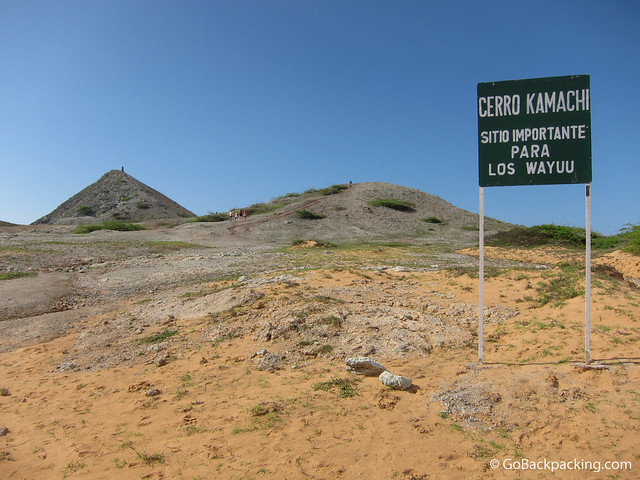 Cerro Kamachi is a sacred mountain to the indigenous Wayuu people.

Walking up Cerro Kamachi, a hill along the coast with sacred meaning to the local Wayuu offers 360-degree views of the surrounding landscape.

The short but steep walk can be done in flip-flops, albeit more slowly than if you bring a pair of sneakers.

There's also a nearby beach that's perfect for swimming, as it's easy to work up a sweat under the intense sun. 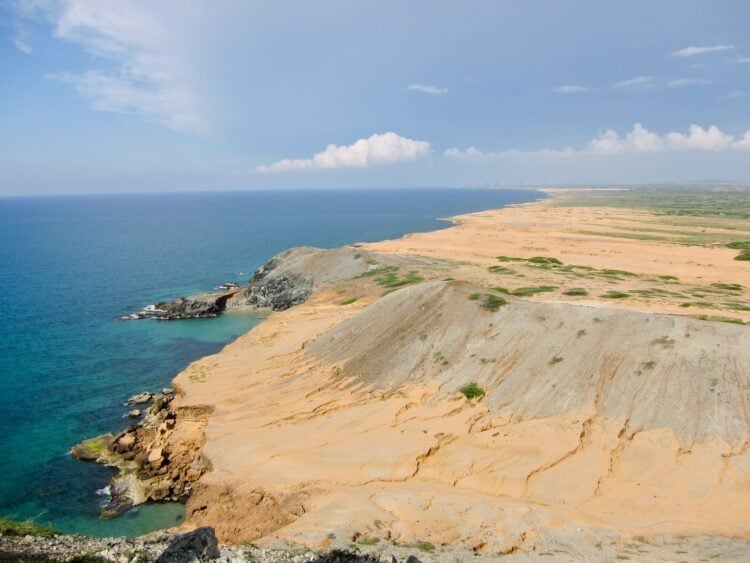 A wind farm is barely visible in the distance

La Guajira Peninsula lacks infrastructure, which is part of its appeal.

There are no roads per se, but rather commonly driven routes from one destination to the next. Many are barely visible in the shifting sands.

At times, driving along the beaches may be required. At night, only a guide familiar with the region should be driving as it is easy to get disoriented.

Cell phone connections aren't dependable. Comcel tends to have better connections in rural areas. I was using Tigo and had no coverage. 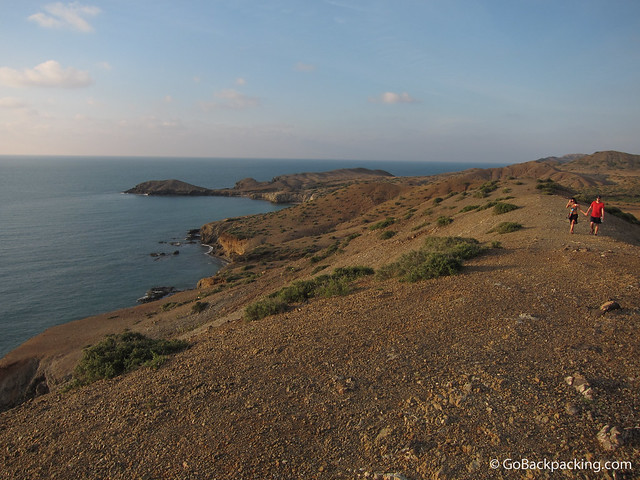 Watching the sunset over the Caribbean is a nightly event for new visitors. 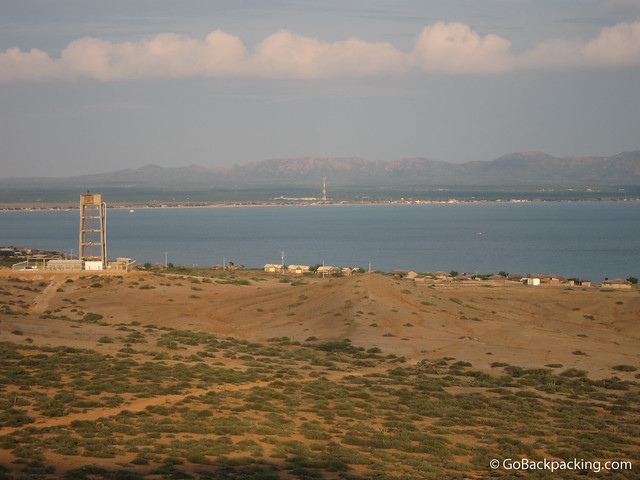 View of Cabo de la Vela, a small village on the far side of the water. 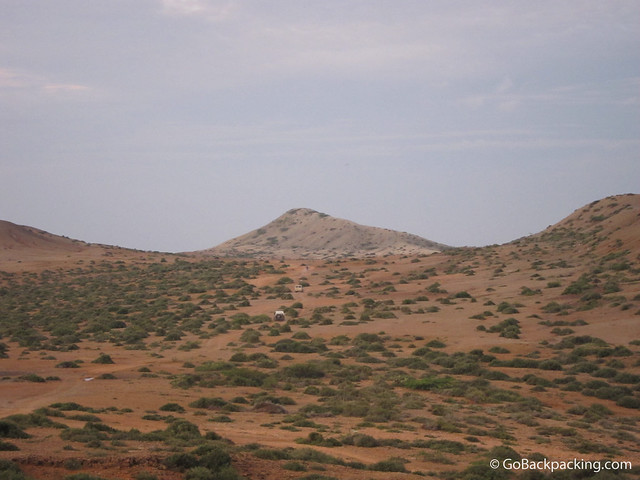 SUV's shuttle visitors back to Cabo de la Vela after watching the sunset.

How to Get There

Single or multi-day tours can be booked through several companies with offices in central Santa Marta and Taganga.

I booked a two-day trip through Magic Tour Taganga (I'm not sure, but they may have been renamed Magic Tour Colombia), which also has an office in Santa Marta, near the Cathedral (Calle 16, 4-41. Tel: 421-5820).

The cost was $215 and included all transport, two nights accommodation in a hammock at a ranch outside Cabo de la Vela, and seven meals.

Alcohol costs extra, so bring your own if you want to save a few bucks.

Fresh lobster cost an additional 15,000 pesos ($8) and was subject to availability.

When booking a 2+ night trip, ensure your second night is at Punta Gallinas, a small village at the northernmost point of La Guajira, and requiring a boat ride to reach.

Single-day trips are not recommended, as it takes at least 6 hours to reach La Guajira from Santa Marta or Taganga.

I just have to add that a visit to La Guajira can be easily done independently although it does require taking multiple bus and jeep rides to get off the beaten path. It's a very interesting place that I highly recommend to travelers along the Caribbean coast of Colombia.

Kevin, some of the locals I saw were riding on the roofs of jeeps that were so weighted down with everything but the kitchen sink, their bumpers almost hit the dirt road! But yea, like just about anywhere, if you want, you can make a go of it on your own.

I read one guy's account of renting a small car to make the trip, and the locals looking at him like he was crazy because of the car he was driving. The route we took in June, there was no way a small rental car could go through some of the sections we did in the truck. It just wouldn't have the clearance.