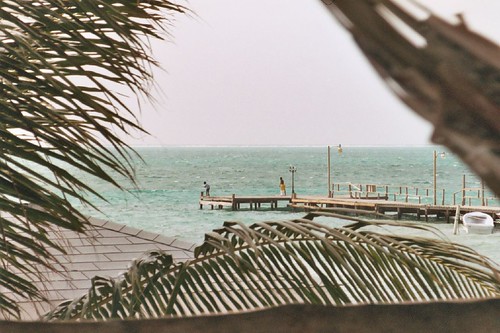 So the Lyrical King was good, but I wasn't feeling quite right and headed back to Ruby's. Just as I got back, I saw Scott, one of the Brits I met the first night. We turned around and went to Cannibals, where more of his mates soon joined us.

Somehow, I ended up drinking – 6 beers yesterday, not what I planned! Thus I'm hung over again. I'm going to get the 11 am boat to Caulker. Then, I'm going to take the day off from drinking! Tomorrow I want to sail, snorkel, or both.

Scott was talking about the crocodiles on the southern part of Ambergris – you can pay local kids $2.50 to get some chicken and feed them. He said he petted one on the nose. Yikes. He was also talking about the tarantulas in the jungle – petting them, and another poisonous spider sitting on his face at one point, not to mention the fer de lances that bit some of his lads. They spent the first week out there with hammocks and mosquito nets.

He also said this R&R in Belize is the first time in 8 years he could relax in a country where he's working. He's been to Bosnia, Chechnya, Iraq twice, Sierre Leone, and 6 of the 7 continents by age 23, and not had to kill a man yet. That's a lot of experience for someone so young. I have to assume that was part of Jon's (my brother) allure in joining the Marines.

It'll be hard to top this room at Rudy's, the breeze has been worth the cost, let alone the view, and private bath. Simply gorgeous. It's the most overcast I've seen this morning, but the sun is still out.

So I went to Jaguar's last night – it was a bigger club than I expected – not too loud thankfully. There was a study group from Eerie College – the girls were all dancing – maybe 8 of them, a couple more grinding a pole, and each other. I guess I stayed 45 minutes, then hit the sack by 12 am or so.

Another Day in Paradise

I kind of want to travel lighter, but I don't know what to ditch. I could drop a pair of underwear, my Italian shirt. In the future I could swim in my shorts rather than bring a bathing suit. 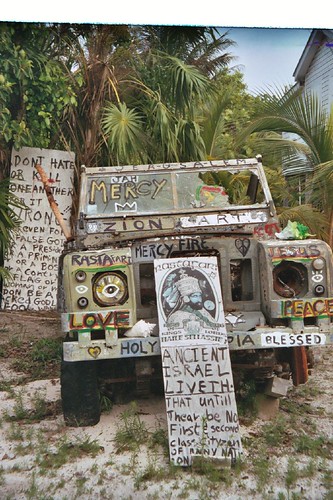 Tina's Backpacker Hostel was a stone's throw from the dock, and I was sold on the balcony, hammocks, and $10 room charge. I pretty much decided to commit 4 nights upon seeing the island, lounging in a hammock, and taking in the breeze. Locals were saying ” hi,”? a plate sized huevos rancheros only cost $3, less noise, far fewer golf carts, amazing views, art hanging around. I waited for some guys to leave and grabbed a second floor bed with a view.

There are no locks on the doors, which always makes me a little nervous – but I'll just carry my money belt, and let go of anything should it get stolen. It'd be a lesson in non-attachment.

I went for a stroll down to the break in the island. The Lazy Lizard bar is down there. True to it's name, I saw a medium size iguana outside. Denise recognized me, and I spent a few hours with her, Nicole, a few random Americans there, and a couple of local Rastafarians, who, passed the ganja from left to right. There was a DJ playing dancehall (Sean Paul) and reggae. I wrote my call sign again on the bar –

I had a tasty daiquiri and a local rum drink – green rum. It was good – I had/have a nice buzz going. I alternated shade and sun, and used lotion but I feel burned on my face. I went for a short swim. On the way back I picked up a razor, homemade banana bread, and more H20. Nicole called me a water-whore. Ha. Apparently she's only 23 and her dad is an adventure photographer. She was a dance major in college. Sweet girl – she likes it here more so than San Pedro – who wouldn't. I was glad for my time there though.

It's like heaven on Earth – I love the constant breeze. I'm trying to decide what to do – I think I'll pass on diving, and sailing. Current options in my mind are a croc tour and night snorkeling. Crazy stuff! Less expensive too! It'd be a full day, $115, for snorkeling at The Blue Hole. It sounds really nice, however 10.5 hours is a long time!

I need a shower.