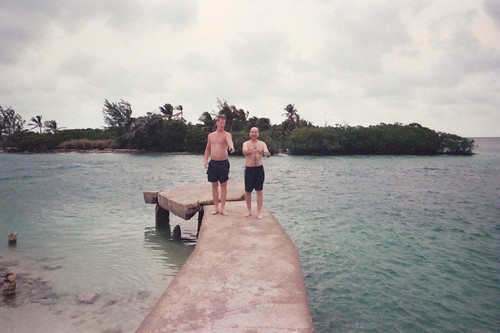 Swimming at The Split on Caye Caulker, Belize

I had a nice beach side dinner at Rasta Pasta. I had a pineapple smoothie, small water, and Cajun spiced pasta with chicken. It was very tasty – I could only eat half as it was a big portion. I stopped by Herbal Tribe beforehand and ran into Denise. After dinner though, I just wanted to lie down, so I fell asleep around 7:45 pm, and basically slept 10 hours. Definitely the longest I've slept since arriving. I needed it. The breeze was making it into the room too, so that was nice. I'm going to try for a night on the balcony though – it's much stronger out here.

I feel grimy. It looked like the girls were staying in a nicer hotel. I need to use the bank. There's a $5 service charge. Plus, whatever my bank adds. Yawn. I still can't get over how constant the breeze is here. My shorts took a lot longer to dry after my swim yesterday than I expected. They still feel damp actually. For that reason, I'm satisfied I brought a bathing suit.

It was cloudy last night – couldn't see any stars. It's quite overcast this morning as well. Still no rain as of yet. Despite the sleep, I'm still beat. Luckily, my only job is to relax here. And go snorkeling tonight!

My bunkmate at Tina's is Manuel, a spliff-smoking Belizean from San Ignacio who spends most of his time in San Diego with his family. He's off painting at Herbal Tribe. Think I'll visit.

After a pancake breakfast at Herbal Tribe, I did some reading. A few profound insights later, I stopped by Tsunami Adventures again. Hopefully they'll get 3 more people so we can do some night snorkeling.

A light digital camera would surely save me weight, and a lightweight daypack would be better than the canvas Jansport I have now. The breeze has been making it in the room since I slid the door open an extra two to three inches yesterday. I'm going to get some banana bread. I have to try some rum cake too. I stopped by the ATM earlier, took out $100.

So I'm reading Lama Surya Das' ” Awakening the Buddhist Heart”? and there are some great new insights that I may have read before, however are striking a chord with me. Specifically, page 42:

It instantly made me stop and think. Why would I choose to challenge myself to be more outgoing, in particular with women. Why would I set myself up with what seems in this life, such a difficult task. I'm 29 and I've never thought of my difficulties – my path – to be one of choice. 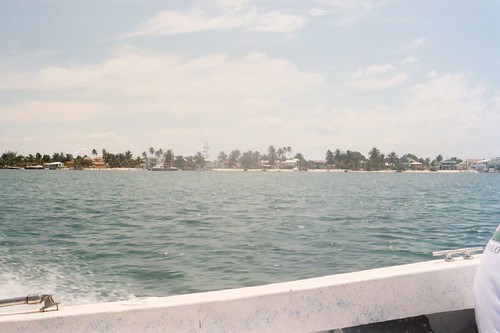 I checked my e-mail – Kai and Phil responded with barely a few words. I was rereading what I sent them, and it sounded like I was having a blast. I am! Not sure I could write anything much back either. The sun is out despite the clouds. New arrivals have taken the place of Tina's departed guests yesterday. I got some local bread, quite tasty. The plan is to chill out, stay outta the sun at midday, and drink no alcohol. Manuel offered me a smoke this morning, however I declined. I want to travel soberly, cleanly, after those first few nights.

I like watching people come and go from the water taxi docks. I secretly compare the size of their packs to mine. I'm at the lighter and smaller end of the spectrum for sure. It's especially funny to see the people with the luggage that has wheels, trying to roll across the beach, or sandy streets. The water is so blue; well not water per se, rather the light reflected off the water. So pretty. The three hammocks below are occupado; however I'm going to hit the one here on the balcony. 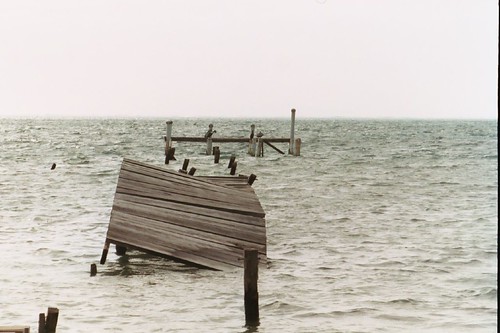 Not enough people for night snorkeling, will try again tomorrow. I passed on a possible croc watch because I made dinner plans with Jim from yesterday, Rachel + Diana (sisters), boyfriend Petar (Croatia) and Amanda. They're all friends. I had lunch with them at the Happy Lobster, Creole snapper. It was good, I like grouper better. I can't wait to try something new for dinner too. A lot of places are closed on Mondays. I'd like to try Habaneros before I leave. I bought a $50 painting from Manuel today, he did it 2 weeks ago in the same spot he was painting this morning. I kind of like the ones he did today but they were a bit bigger, I'm happy.

It stayed overcast much of the day, and still is quite cloudy. Looks like it could rain but I bet it won't. Love the breeze. I love this hammock on the balcony, prime real estate. I saw Nicole a few times today, not enough for a conversation though. The twinkling Christmas lights have come on in the garden. They're a fun touch, especially because it really gets quite dark at night. I'd like a night time beach walk if I could find some female companionship!

So I'm going to hit up Dangriga Fri/Sat to check out some live Garifuna – drumming. Maybe spend a night on a Tobacco Cafe. The only question is the order in which to do things.

I don't miss TV a bit, or movies, or the commercialism and consumer culture of my homeland. There is so much to some late the mind when traveling, people, conversation, new cultures, the environment. It's a beautiful thing. I'm humbled by the beauty of this island. I hope it can keep its character as it will (inevitably) continue to get developed. The Croatian guy painted a great picture of Croatia. I'll have to keep it in contention as a destination the next few years. Travel around the world, hell yeah. I can and will do it.