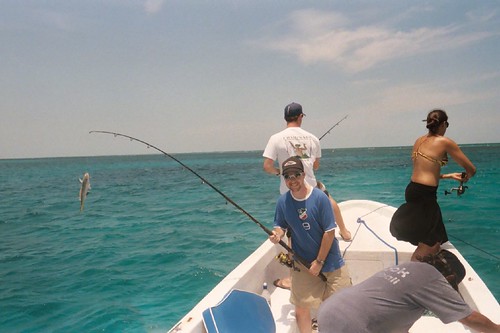 Diana, Petar and Tim invited me to go fishing last night on our way to dinner at Syd's. I have to get walking in a few minutes. I had fried conch last night. It was good, worth trying. Too bad it's not yet lobster season. There was a big thunderstorm last night between 11 pm and 2 am. Downpour, one particularly loud crack of thunder, plenty of flashing, lightning. 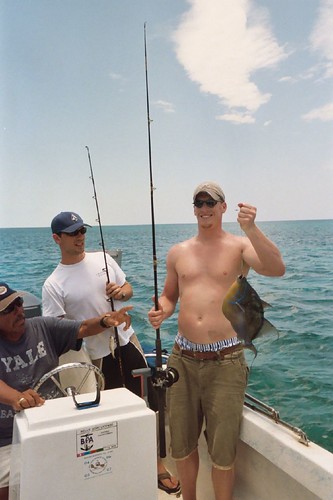 Tim's big catch of the day

This morning the wind has died down, and the sea looks mere like a lake. I was up at 5:30 am but it still seemed too late to catch the sunrise. It's quite possible I won't see Nicole again. I think I'll leave a note with my e-mail address at their hotel for when they check out.

5 hours on the water, baking, hot, heat. We trolled (boat moves w/ lures trailing), and didn't get anything. We stopped and fished standing still and caught a lot of yellow fin snapper. I got quite a few. We trolled again, and Petar got a mackerel. Tim and Diana got barracudas at the same time. Then Petar and I trolled for 30 minutes and got nothing.

I left them as they were scaling/cleaning the fish. I had to get out of the sun. I napped for about 2 hours, then dropped off some laundry, got a chicken quesadilla, chocolate ice cream cone, and espresso brownie. That was tasty. The skin around my neck is very red, and my cheeks feel like they have habaÃ±ero sauce on them. There's still barely a breeze, and it's wicked hot in humid. 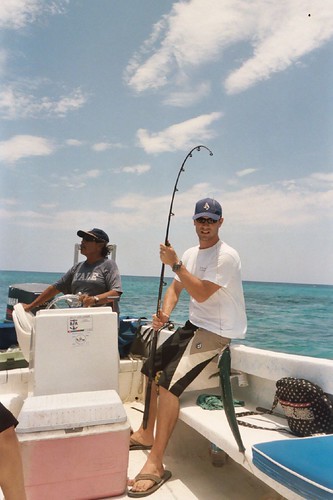 I can't believe whatever I'm feeling now will be less than the heat felt on the mainland.

Last night after dinner, we went atop the condos where the others were staying. I had two Barrel One rum and cokes. Denise was right, it does taste good. It's coffee flavored. We played a nice game…

It was a nice way to get to know everyone better. They're all quite nice, I'm glad I met them. The wall for here shakes like it'll fly off at any moment. It was on all last night, so far it's stayed put.

The espresso brownie I had was delicious. And I need to eat more ice cream! I think I'll stay one more night on this island, then head inland Thursday morning. That'll make for 7 days on the caves, 11 days on mainland.