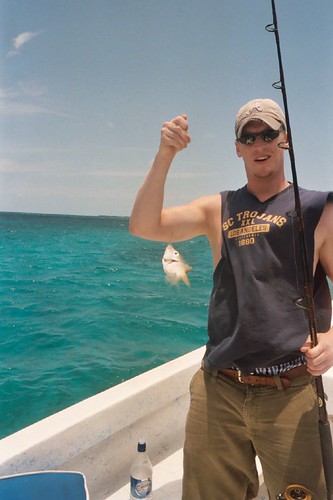 Tim and Diana did a great job cooking last night. The fish were grilled in aluminum foil, each with a slightly different seasoning. We brought chairs and end tables to the side of the road w/ the barbecue. We ate family style. Coconut rice in beans, One Barrel rum ‘n coke.

We played charades for quite awhile. Man, a lot of backpackers are at the dock early. That will be me tomorrow. Off to Caves Branch. I'd like to do a weekend night in Dangriga to hear some drumming. I also forgot about checking out the Jaguar Preserve, and it seems like a lot goes on in San Ignacio.

Last night after dinner, we picked up Elyse, an American from Colorado on a 5 month trip through South and Central America. She was quite good at charades. I don't know how she figured out I was doing ” Alf.”

At any rate, lately I've felt a lot of envy when I hear people talking about their long term travels, or places they've been. Envy, jealousy, not feelings that are positive. For some reason, I want to be the one saying I've been on the road X months, touring the world. I want to be that person. I suppose I can turn such negative energy into positive by using it to motivate me to save more, spend less, as those are the keys to a trip of my own.

Spring 2008, I dunno. What happens if I meet a girl before then, fall in love, and never take the trip? So many of the people I've met traveling are younger than me. Early 20's. Is backpacking cliche? It's certainly not an original concept these days, nor are the tourist trails, destinations, etc. On the road, it can feel hackneyed. Why bother?

We stopped by I&Is last night, a tree house but that appears to have been designed on an acid trip. It definitely did not feel safe or sturdy sort of like Tina's hostel. But, it was quite the popular hangout, at least last night around 11 pm. Looks like they're getting everyone on the 7:30 am boat, that looked like a lot of people and backpacks. I may try for the earliest boat.

The guy in the bunk below me sleeps a lot, which would be fine except he like to keep the curtain closed over the sliding door, which is black, thus blocking light, and any breeze. Then, to stay cool, we need to use the loud shaky wall fan. My boxes/shorts feel much better after the wash yesterday. There is no toilet paper left in the bathrooms downstairs and I need to take a crap. The waste baskets could use an emptying too, and if I owned this place, I'd do a little better job keeping it clean. I'm not saying spend major time but these has been an empty water bottle on the balcony for 3 days.

Today I gotta suck in the beach life, sand, hammock, Caribbean breeze, quietness, over the sun, at least indirectly. The breeze is a little nicer today, still not back to what it was before the storm.

Buster (Juan Love), the black and white dog who befriended us two nights ago is here at Tina's. He gets around. He digs into the sand a little before laying down, so as to sit on a slightly cooler surface. Elyse wasn't too interested in petting him last night as he likely has fleas. I'm sure I'll live.

The sky is a beautiful blue this morning. Clouds and haze are only along the horizon. The water is as still as a lake, and the breeze is only slight. I'm going to spend much of my day at the hostel, make an effort to meet some new people. For now, a little more reading, protected from the shade of the early morning sun.

It's bloody hot. I ran into Nicole and Denise on the way to breakfast and said bye. They're leaving on the 11:30 am boat. I just paid $10 for one more night here. I got huevos rancheros at Herbal Tribal and a cantaloupe smoothie. I ate about 1/3 of breakfast. It was too much. I should recognize the two humble pancakes and fruit of yesterday was a great breakfast. Less costly too. It's really, really lot! As the sun comes up, the waters colors shift, some areas become lighter, others by contrast, seemingly darker.

At breakfast, I felt a twinge of pain in my upper right chest.  I felt it twice, no more than 2 seconds, yet my mind was off and racing about it being a symptom of a catastrophic problem, how would I get help, how soon could I pick up and fly home. These thoughts are very irrational. Yet classic signs of a panic attack. I'm definitely better at recognizing the signs. I'd like to think these will be a time when I don't leave, such thoughts at all, however I know they're tied to the fight or flight response, and not necessarily going anywhere so the better I learn to cope the better off I'll be. And that's what I did earlier.

Someone stole my $40 in reserved cash that I was keeping in an empty film canister. I just took inventory. I should be glad they didn't take my Visa card or MP3 player or camera which hasn't necessarily been secured in the top porch of my bag the whole time. Lesson learned, don't leave cash ” hidden”? on your pack if you're not in a locked room. Or at least ensure the cash is in a secure part of the bag, hell, even at the bottom of the bag in my hiking boots. The farther someone has to go, the better the chance of getting caught, the greater the risk, etc. Lesson learned. A few good things I did include ensuring I was hiding only a small amount of money, such that its loss would be minimal. I'm actually impressed w/ my response. What can you do?

I love my view from bed. Palms, azure waters, linen shirt hanging on the bedpost. I've had some thoughts of leaving today, however I have not. Part of me wants to leave as 4 nights seems like one to many; the other part of me wants to enjoy this island paradise a little longer. The latter thoughts have won out, along with a general lack of motivation to make the trek inland. I'll save that for an early start tomorrow.

I'm definitely overspending. Having $40 stolen doesn't help. In the end though, I'm a working man and I know that I get paid Friday, and I can return from my trip still in a position to continue saving for my RTW trip. The guy in the bunk below me just left. He said he'd been traveling 8 months – 6 in Mexico and 2 in Guatemala. He was trying to decide whether to get to Brazil by plane or land. You definitely meet some characters traveling.

I'm suddenly humbled. The guy below me just left, and I saw a film canister. I picked it up, and found my $40. It must've rolled out when I opened my bag this morning and I didn't see it because it was behind the guy's bag. Faith has been restored to my fellow travelers, and I was just reminded not to jump to conclusions. I just accumulated some negative karma because I didn't write it, but I thought about others in my room who could've taken the money. I owe them an apology, at least a mental one.

My doubts of staying another night flittered away when I stepped outside again, in the shade, felt the breeze, saw the sea, and found myself a hammock. It's so quiet here, peaceful. Beautiful. I'm wearing my shirt less at the hostel. The air feels good against the skin, and I'm not so self-conscious (about my man-boobs) or bit of chubbiness. Who cares? Not me.

I'm a lucky son of a bitch, regardless of any complaining I've done in this journal so far, my problems pale in comparison and importance to those of the poor, underprivileged, unhealthily, disabled people of this world. Who am I to complain?

Every new boat brings new guests to Tina's. There's a natural ebb and flow to the travelers coming and going like the water nipping at the beach. Nicole and Denise are about to ship off. I'm hammocking it, make it a low cost day. The rest is welcome after the sun yesterday. When I sat in a hammock in the garden upon arriving here, there was an Australian hanging next to me, he had just gotten some fresh pineapple and banana bread, he was quiet, but did make a comment ” This is all I do here”? in reference to lounging, getting up for some food, and then lounging some more. Our fishing guide's name yesterday was Rollie (phonetically spelled).

The sun is setting; the water is turning a dark, uniform blue. The breeze has picked up and it's rather cloudy again. Hope it doesn't rain. I just joined Ariel for a bit, she's staying at the hostel finishing a 2 month Central American trip. She's Canadian. Quite friendly, great thin, tan body, bikini top, w/ green linen pants (page 29). I had a caparinha, she a veggie burrito.

The water really is beautiful regardless of which color it is (i.e. where the sun is). Habaneros has some high prices, highest I've seen on the island. The food looks quite good too. Doing it right, I could spend $50 on lunch or dinner. I passed on lunch and would only go to dinner there if Tim, Diana, Petar, Amanda and Rachel happened to do so. Otherwise it could be an awesome meal, but less so if no one to share it with. I'm a rainbow too…

I took out $140 cash earlier. Hopefully, that'll last me a few days. My guidebook says the Caves Branch Lodge doesn't have credit; however I'm banking on the tour group liking it.