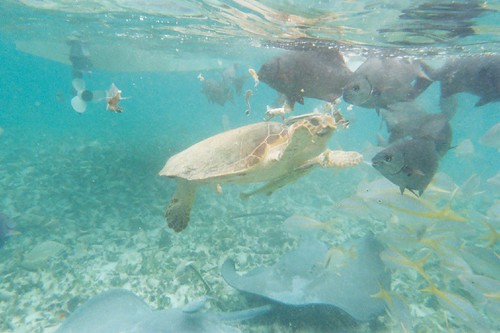 A turtle feeds on conch - Belize

It turns out a bunch of British army guys are staying at Ruby's, enjoying R&R after 33 days of training in the jungle. They provided quite a bit of entertainment last night, and some interesting stories, like one guy seeing a woman get stoned to death in Kenya by hundreds of villagers after stealing something small, like food. I also talked to an older (50's) guy named Bob who comes from Vermont to go fishing here. There were a few girls too.

I was content with sitting on the balcony, looking out over the sea, enjoying the breeze, and the full moon. Time seemed to crawl by very slowly. Around 10 pm, I went to Fido's and got a free Rumarita with a coupon I found. There was a band playing and it was open-air, quite nice. I stayed about 30 minutes, then went back.

It took me some time to fall asleep, what with the heat, and street noise. It's quite loud. Not sure I want to pay more for one of the seaside rooms. It would have a bath. I'm use to sharing though.

Last night I had grilled grouper for dinner. It was a smaller piece then I expected, but very good. The Belikin beer was average, can't say it did much for me one way or the other. I woke up at 4:45 am to street noise. Fell asleep again, and woke up around 6 am. I feel quite tired. I assume it's partly jet lag, partly the heat, and new environment. I have to remember to stay hydrated. 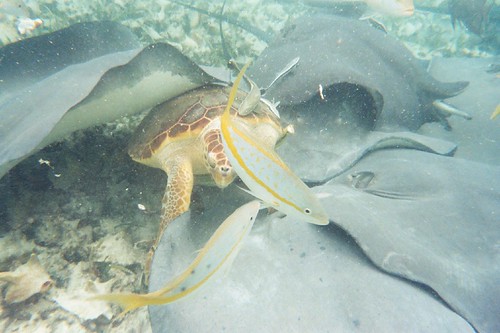 I'm feeling anxious – about snorkeling, diving, sailing. It'll all be fun, no pressure, this is a vacation. I think I am putting too many expectations on myself. I have to let go. Things will happen as they should, there's no need to force myself. At the same time, it would behoove me to keep a positive attitude. Think how much fun the activities will be!

I caught myself comparing myself to the British guys last night. That's of no use – wasted energy. It's ok that I don't have a desire to launch golf carts off dirt jumps, or into the sea, or get drunk each day and night. I am who I am, and I'm happy with that.

I've decided to do a half day snorkel trip at 9 am. Swimming with sharks should be exciting! It's overcast – wonder how long that will last. I'm very grimy but if I'm going in the water in a few hours, why shower? Eh, I'm showering!

Note to Self – showering and brushing one's teeth can have a surprisingly refreshing result. I even feel less lethargic then I did 20 minutes ago. And there is a guy with a pet spider monkey on a leash down on the hotel patio. 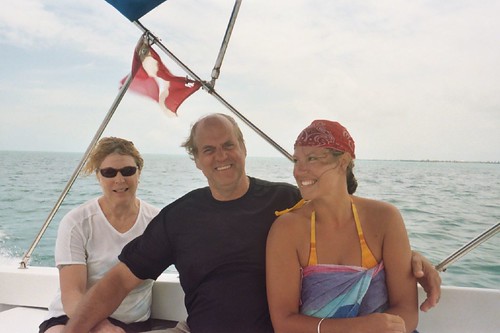 Andrea and her parents

I've spent $237 in less than two days. Geez! I've just upgraded rooms, from the street side, to seaside.  I've got a nice breeze and view, private bath, towels and more light, and less noise. I figure, why not. I feel a little self-conscious that this isn't much of a budget trip so far, however from what I hear, Ruby's is one of only three inexpensive spots in the area. It attracts a social crowd too. Nothing wrong with having a private bath!

I went snorkeling at 9 am. A Canadian family and I were the group. The daughter, Andrea, is living down here as a pilot for Tropic Air, and her parents were visiting. They were quite nice. I joined them for lunch afterward – cheeseburgers in paradise. My cheeks feel warm. I think I escaped without much of a burn. 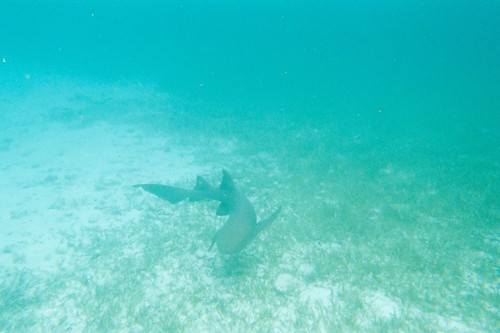 The snorkeling was great. Shark Ray Alley was first, lots of nurse sharks – cruising the bottom. Big stingrays. They look crazy. We made an impromptu stop by some fishermen that were cutting up conk. A loggerhead turtle was chowing down, so we did a short snorkel, the rays were even bigger there! Then a third stop in the Hol Chan Marine Reserve, a snorkel where we were taken with the current past reef in deeper waters, and had to swim against the current back to the boat. By then, I was feeling tired. My mask was fine, but the nose part kept taking in water, so I really got use to breathing through my mouth.

I did start taking in sea water though. Just a few minutes ago, it started dripping back out my nose.

I can hear the Brits on the balcony.  I'm beat! I could explore, but I'm honestly content sitting on my behind! Tomorrow I think I'll do a resort dive. Man, $125. I'm bleeding money here!

Before I went to snorkel, I ran into the blonde American girl on her way to Honduras today. She was downstairs and had the pet spider monkey on her lap. I grabbed a seat, and the monkey came over and sat on my lap, curling up and napping. She was quite a friendly monkey.

Hopefully I'll see her tomorrow so I can snap a pic.