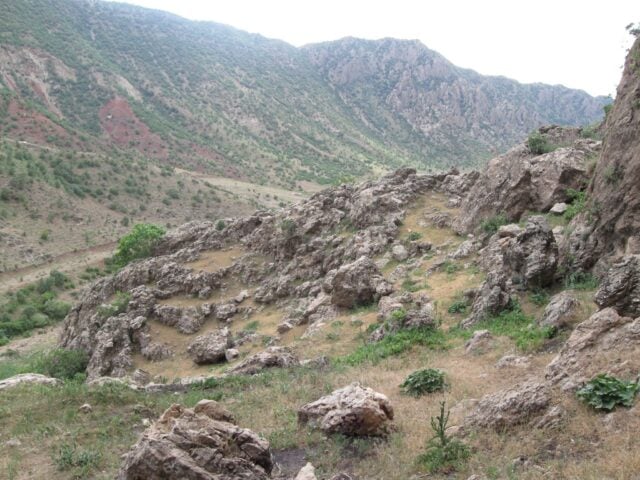 Hiking outside of Zakho

This is Part Nine of an 11-part series on traveling in Iraq by Kevin Post. Read Part Eight here, or Part One to start from the beginning.

[H]alabja was solemn, beautiful and worthy of the trip.

Although I recommend everyone visit while in Iraq to pay their respects I do not recommended staying there for more than a day without exploring the surrounding areas because it can get depressing.

One of the worst of many tragedies in Kurdish history occurred in Halabja and every street corner I was reminded of the horrendous acts committed by Saddam Hussein and his Baath Party.

The town is still recovering from poisonous chemicals found in the soil and has been converted from Fertile Crescent to a destination for pilgrims paying respect to the slaughtered. I could imagine a similar feeling while visiting a WWII concentration camp or a gulag.

Halabja’s surroundings and the people I met were my favorite aspect of the visit. I like to think my visit contributed positively to that town but after several hours of mourning I was ready to leave.

We picked up hitchhikers on the trip back to Arbil and that was by far the highlight of my trip.

Mohammad could sense that I wanted to pick them up so he gave me a gesture that certainly suggested, “Do you mind if they ride with us?”

Either that or Mohammad just wanted to speak with someone in Kurdish. I excitedly agreed.

I laughed to myself because if I were to go back in time and tell my high school self that I would be picking up hitchhikers in Iraq I wouldn’t have believed it.

The hitchhikers we picked up were farmers and as they were thanking Mohammad he insisted, “Don’t thank me, thank Kevin!”

Immediately they looked at me, thanked me in unison and from what I understood I was invited to a wedding.

We listened to traditional Kurdish music and everyone sang along including me even though I didn’t know the words. It felt so liberating to leave such a solemn place and celebrate life on this Iraqi road trip.

I have a feeling that if I spoke Kurdish we would still keep in touch to this day.

Upon arrival in Arbil I excitedly told my hosts about my trip to Halabja and explained to Mohammad via interpreter how the trip made me feel and how it was such an honor to spend time with him. As I went to pay him for assisting me on my journey he refused which led to a ceremonious plea to take my money.

Now that I look back it could be that Kurds also partake in the tradition of taarof: a set of rules and social etiquette, which can be quite confusing to us living in the West.

After saying my goodbyes to the Turkish and Kurdish engineers I left with Mohammad for Zakho along the Turkish border. It was already nightfall and there was news that the Turkish military had intensified their offensive again Kurdish PKK rebels within Iraq.

We were advised to be cautious and not stop in areas that weren’t well populated or lit. While listening to what I assumed was the Kurdish version of National Public Radio and driving at high speeds on the surprising well-paved road, Mahmed felt the need to stop and pray. I was exhausted and wanted to return to Turkey to be with my more secular minded friends.

“We were advised not to stop,” I reminded Mahmed with my attempt to arrive quickly to Zakho for the night. A man of faith such as Mahmed couldn’t fathom not praying at this time and frantically looked for a place where we could stop to do so. The road had no lighting for as far as we could see.

After minutes of bickering amongst the other passengers in the car Mahmed decided to turn onto a dirt road without any visible signs or addresses posted. We drove many a km on a dirt road with a conflict going on several miles from us.

“Allah will guide us” were the final, confident words uttered before we sat in silence hoping to find that mosque.

Hello! Wow, you ARE adventurous! When most people in the West think of Iraq, it is usually not in a good way, or at least not in a vacation destination way. Your trip sounds amazing. Maybe someday, the area will be more open to tourism. The history there is incredible. Take care.

I couldn't agree more Curtis. I like to look at it this way: in recent history Medellín Colombia used to be the most dangerous city in the world but less than two decades later is now an expat hotspot and one of the most desirable cities to live in Latin America. I think many places in Iraq could make that transformation in the near future as well.

I would like to read more of your hiking adventures. I also would like to try hiking but I was too scared of the slopes of the mountains.

It's far more dangerous to drive a car on an interstate than go for a hike. Hire a guide and go somewhere that doesn't have too many steep slopes and you will see how liberating it is :)

Really interesting to read about Iraq. It is so rare to hear anything about the country. :) Your trip sounds great.

Great post! Very interesting to read and think about it. I've never been to Iraq but I have friends who were born there. I'm looking forward to seeing the next posts of your journey!

Thanks for the kind words everyone! Hopefully it won’t be too long before I return.