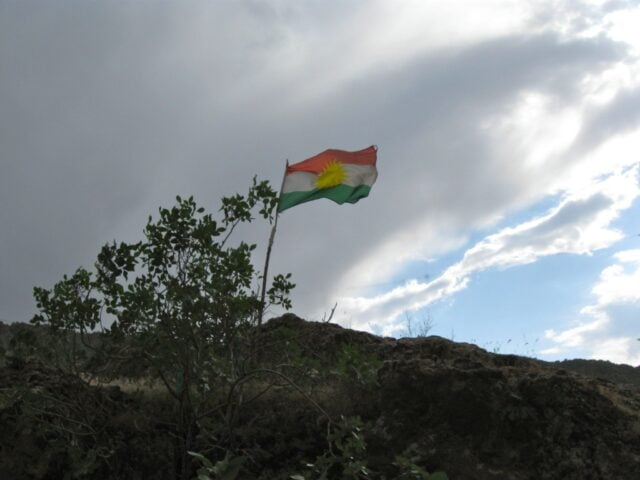 This is Part Ten of an 11-part series on traveling in Iraq by Kevin Post. Read Part Nine here, or Part One to start from the beginning.

[M]ahmed’s intuition served us well and we finally found a dimly lit rest area far more primitive to other rest stops and gas stations I was accustomed to seeing while in Iraq and covered in photos of Kurdish nationalistic icons.

I couldn’t see anything on this dark night with the exceptions of aircraft above the mountains. Although I am not particularly religious I am happy that we stopped to pray; I enjoyed the silence and the lack of light pollution.

I broke the silence while in the car asking about the photos of these Kurdish heroes and political figureheads. The discussion turned into contradiction to what I knew of the Kurdish struggle for a homeland and I soon began to learn after further research how divided the Kurds were in many ways.

Throughout the Kurdish inhabited regions of Turkey, Syria and Iraq I was reminded of the idea that Kurds were united but many of those I had spoken with have proclaimed contrarily to this belief.

Politics, tribal loyalties, geopolitical boundaries, language and alphabets (yes, there are disagreements as to which alphabet they should use) are prohibitions for a dream of Kurdish nationalism.

The border town of Zakho is about a four-hour drive from Arbil but this trip took longer than expected due to continual military checkpoints and I was running out of things to say.

We were mostly silent the rest of the night from exhaustion, language barriers and cultural misunderstandings before checking into a hotel outside of Duhok.

Everything about my last few days in Iraq was on the contrary to what I had believed before I arrived.

Based on the images I saw on the news I thought Iraq was desolate which is far from the truth at least in the north. Springs, rivers, alpine like mountains, snow, flowers and an abundance of fruits were commonplace. In some places I felt as if I were in the Alps.

My last day was near-perfect in Iraq-KRG with a Friday sermon in a mosque, one of the most exquisite feasts I’ve ever had, a swim in a springs and a welcoming spirit from the locals that is hard to beat.

I can see this place hosting many a traveler in search for a beauty surrounded by misconception.

We have all seen some of the most dangerous cities on earth turn into phenomenal destinations (does Medellín ring a bell?) and Iraq definitely has something that every traveler will be able to look forward to.

One thing is clear, this trip is not for sissies....interesting post.