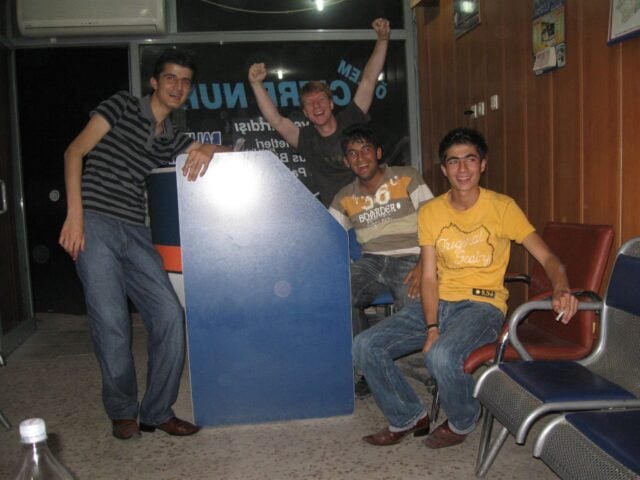 The author (center) with employees at a bus station in Silopi, Turkey

This is Part 11 of an 11-part series on traveling in Iraq by Kevin Post. Read Part Ten here, or Part One to start from the beginning.

[T]he line of cars and trucks carrying petroleum attempting to cross Turkey’s border was unlike any border crossing I’ve ever seen.

The taxi I took facilitated the border crossing because these drivers make the trips frequently and are well-known by officials on both sides of the border.

It dawned on me that I was traveling for the sake of travel while everyone else was traveling due to unfortunate circumstances or for economic gain.

Before I put my backpack into the trunk my driver handed me several cartons of cigarettes to put into my near empty backpack. I didn’t see any reason not to but was later told that smuggling cigarettes across the Iraqi border was frowned upon.

I pulled out my notebook filled with scribbled transliterations of Sorani Kurdish to facilitate our conversation but was asked to toss it before arriving towards the Turkish border as if I should have known better.

We crossed the bridge separating Iraq from Turkey and I began tearing out sheet after sheet of my notebook and ceremoniously tossed all of it into the river below.

My time came to report to the Turkish military. Turkey is the most welcoming country I have ever visited but not at this border. I could now see why I was encouraged to toss my notes into the river.

All of my possessions including my photos were taken from me and analyzed without me being present. I was sent to wait in a concrete bunker because many questions remained to be asked before I could cross.

Four hours of waiting as the night brought an arid chill. I knew the interrogation was coming and probably deserved it.

The Turkish government was most concerned that I would have Kurdish propaganda or pro-Kurdish nationalist tendencies.

The soldier, whom spoke flawless English, seemed to notice that there was no fear on my end and that I was happy to be returning to Turkey. I firmly shook his hand and caught a taxi into Silopi.

I was the only person at the bus stop ready to purchase my ticket to Ankara. I made friends with the attendants and drivers just from talking about football.

They put me on a van without telling me where I was going which would have alarmed me anywhere else but not here. I was taken to a party in a run down part of Silopi to have tea, eat some bread, practice my Kurdish and sit in a living room illuminated by candles with the sounds of generators in the distance.

Not 20 minutes later I was hurried back into the van back to the bus station to catch my bus to Ankara. My understanding was that they wanted to introduce their friends to a foreigner.

It happened so fast but the people I briefly met in Silopi gave me a lovely farewell.

To me it was no farewell; it was Turkey’s lovely embrace.

A mesmerizing mix of the exotic and the familiar, Turkey is much more than its clichéd image of a “bridge between East and West”. Invaded and settled from every direction since the start of recorded history, it combines influences from the Middle East and the Mediterranean, the Balkans and Central Asia.