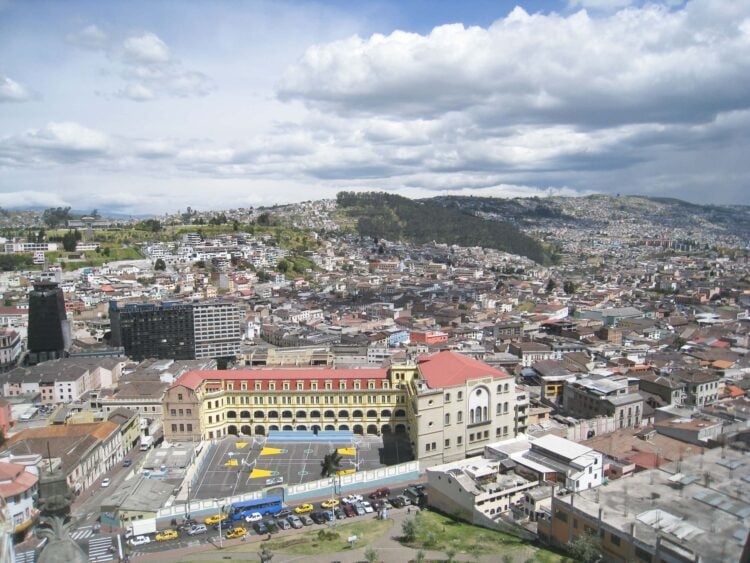 Quito is the capital of Ecuador, a UNESCO World Heritage site, and the principal city through which tourists arrive and depart the country.

For those who still make the mistake of skipping Colombia, Quito continues to be a popular start or end point for backpackers traveling the South America circuit.

In South America, it's also one of the cheapest, after La Paz in Bolivia.

While the city itself isn't the prettiest, nor the safest, there are enough interesting and unique activities to keep visitors busy for at least a few days, before moving on to either the Galapagos Islands or other parts of the country. 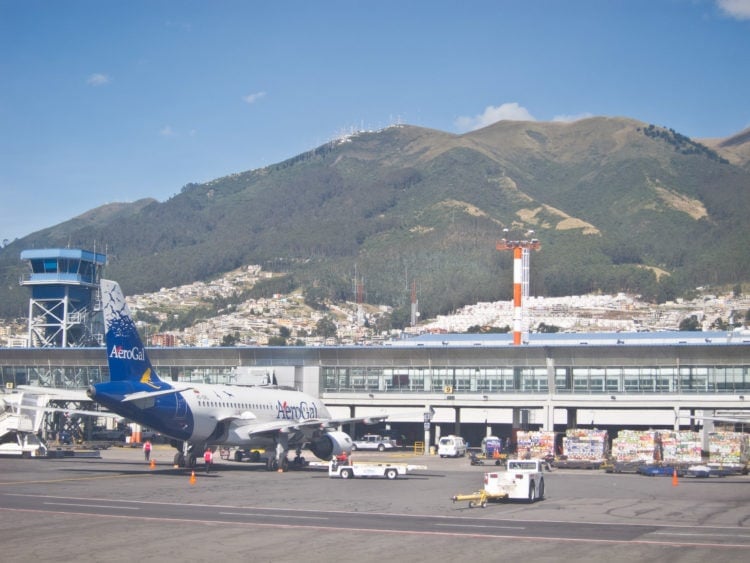 Due to the location within the city, and mountains, the approach to landing requires a series of banks and turns.

A new, larger international airport is currently under construction north of the city.

This airport is the hub for Aerolineas Galapagos and offers daily flights to most of North and Latin America, as well as major European cities.

A taxi during the day costs $5 – 7 to La Mariscal, the main tourist neighborhood. For safety reasons, I advise you to take a cab while carrying all your luggage.

However, if you want to take the local bus, the cost is only $0.25, and you can pick up any “JL Mera” labeled bus by crossing the street outside the Departure area of the airport terminal.

Be sure and keep any bags with valuables on your lap at all times, or in front of you if you're standing. Theft on buses in Ecuador is a problem. 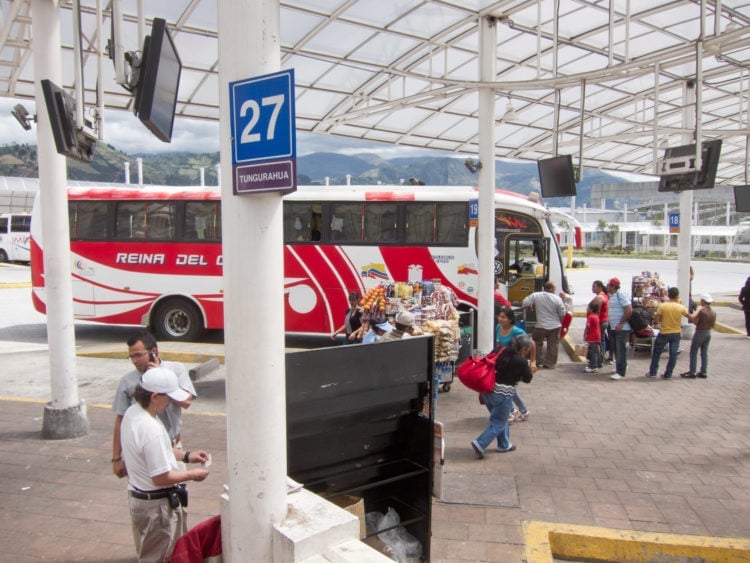 The modern, Terminal Quitumbe in the South of Quito

Due to Quito's sheer size, there are two bus stations located at opposite ends of the city.

This modern, new bus terminal is located at the Southern end of Quito and services the most common tourist destinations, including the coast (Guayaquil), Amazon, and most of the mountain regions (including Banos and Cuenca).

A taxi during the day from La Mariscal costs about $14, or you can take local buses, however, be extra careful of your belongings.

Buses depart for cities around the country day and night; the bigger the city, the more frequent the departures.

Located in the Northern part of Quito, this station serves Carchi and Imbabura. The primary reason for taking a bus from this station is to visit the Otavalo Market.

A few bus companies have terminals located in La Mariscal, so you may want to ask at your hostel whether you can take a bus from there; however, you may have fewer departure times and destinations to choose from.

Check out my tips for staying safe on the buses if you want to know the common tactics of thieves, and how to protect yourself. 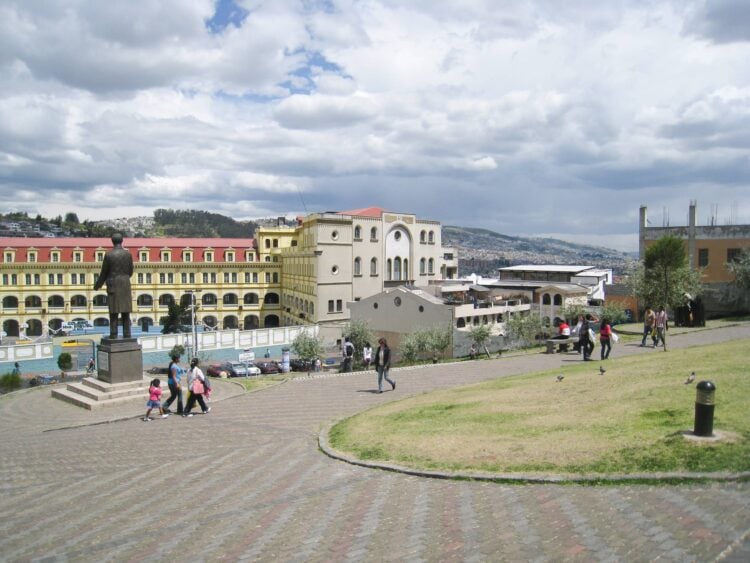 The only areas of Quito you'll want to walk on foot are La Mariscal and the historic city center.

Otherwise, for safety reasons and time, you'll want to take the buses, if not taxis at least, to get around.

Uber is the safest way to get around Quito, and it's inexpensive too. Use this ride-hailing app whenever possible.

Taxis are cheap and should be taken at night if you need to go more than a few blocks.

Taxis are metered, though many drivers prefer to negotiate instead, to gauge unsuspecting tourists.

Get an estimate from a local, and always do your negotiating before you enter a cab.

Whenever possible, use a private (yellow) taxi service. Ask your hostel or hotel to call.

Unofficial taxis are much more prone to robberies, whether by the driver or someone else.

A common tactic is the “express kidnapping,” which involves taking the victim to an ATM where they're forced to withdraw the maximum amount allowed.

Most rides cost a mere $0.25, so it can be a very inexpensive way to get around the city.

I know I've already mentioned it often, but be very careful about pickpockets when riding the buses in Quito, and Ecuador. 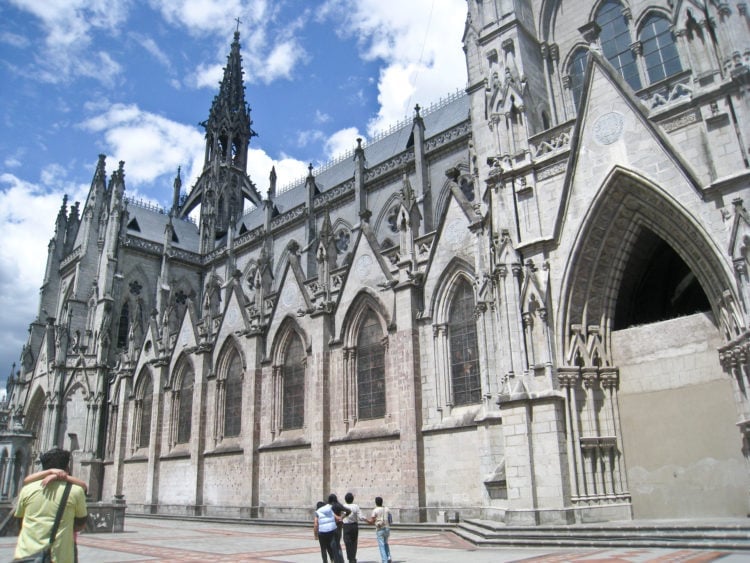 Visitors arriving by air should expect to feel the physical effects of the high altitude within 24 hours of arrival, including:

To minimize the effects and their duration: 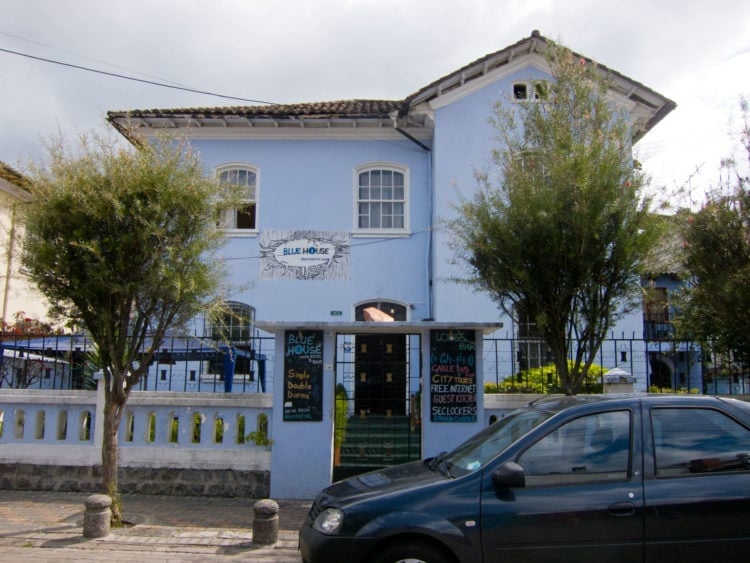 The Blue House in La Mariscal

Despite the immense and sprawling size of this 2-million person city, most visitors stay in one of two locations: La Mariscal (New Town), or the historic city center (Old Town).

Neither area is especially safe, as backpackers are commonly robbed day and night, within blocks of their hostels.

Quito offers backpackers a wide range of accommodation, for all budgets. Costs are higher here than in the rest of the country.

Dorm beds are $10 or less, with private rooms starting around $15 per night.

If you plan to spend a few weeks, or months, in the city, then you'll want to rent a room or apartment.

Your best bet is to either negotiate a long term rate with a hostel or use Airbnb. 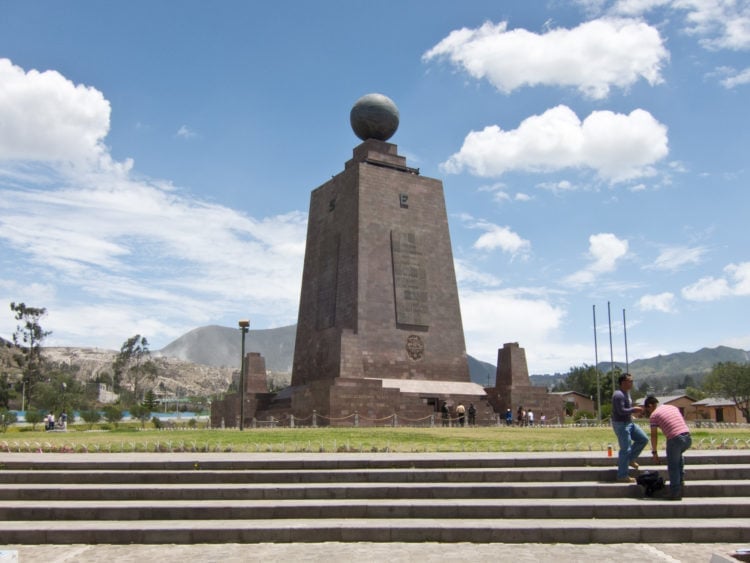 Even if your time in Quito is short, as is the case with many who only visit Ecuador for the Galapagos Islands, there are still some quick and cheap sightseeing options.

Climbing Pichincha Volcano – If you want to hike to the top of this 4,784-meter volcano, start with an early morning ride on the Teleferico to give yourself plenty of time.

Even if you've spent a few days acclimatizing in Quito, this is a challenging hike.

Visiting the official Equator line and the monument built at the wrong spot are Quito's most famous, and popular, sightseeing activity. Allow a half-day.

Riding the Teleferio– For $8.50, you can ride one of the world's highest aerial gondolas. You'll be dropped off at an elevation of 4,100 meters, and offered sweeping, scenic views of Quito and the surrounding mountains.

Go in the morning, when you've got a better chance of clear weather, and dress warmly.

The city center can be covered in a half-day, but it's better to allow yourself a full day to see everything at a relaxed pace. 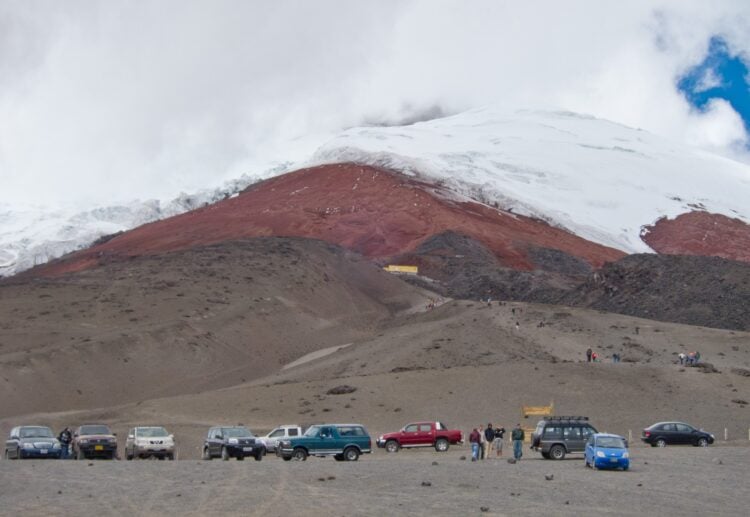 The parking lot at Cotopaxi Volcano – 4,500 meters above sea level

Mountain Biking Cotopaxi Volcano – For active travelers, downhill mountain biking Cotopaxi is one of the best ways to spend a day outside the city.

Alternatively, you can do the one hour hike up to the glacier, or try to summit the near 6,000-meter volcano with an ice ax and crampons over two nights.

Otavalo Market– Ecuador's largest craft market is located two hours North of Quito by bus. Visits can be done in a single day, or you can choose to spend a night or two for a more relaxed experience.

Saturdays are the busiest day. You can go independently, or join an organized group tour from Quito. 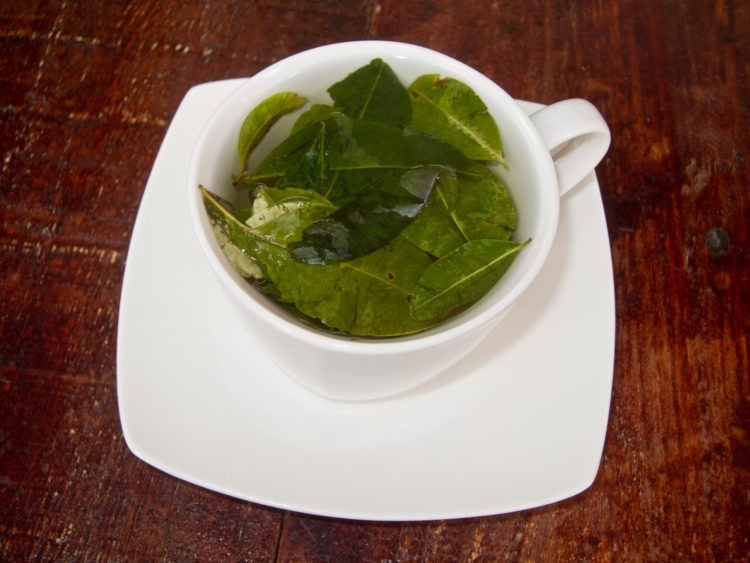 Ecuadorian food doesn't get a lot of attention; however, if you're willing to experiment with new dishes, you're sure to find a few to your liking.

Quito, like Guayaquil, offers a more international selection of restaurants than other parts of the country.

In both cities, you'll find regional dishes from around the country, though there's a more significant emphasis on food from the Sierra in Quito, whereas Guayaquil has a stronger focus on seafood.

Dozens of these restaurants can be found in La Mariscal, centered around Plaza Foch. Expect higher prices given the higher density of tourists.

Restaurants listed here, and on sites like TripAdvisor, are going to be priced for tourists.

To eat cheaply, including set lunches for as little as $1.50 or $2, look for where the locals are hanging out.

These small, unimpressive restaurants are often just a few blocks from the tourist ones. 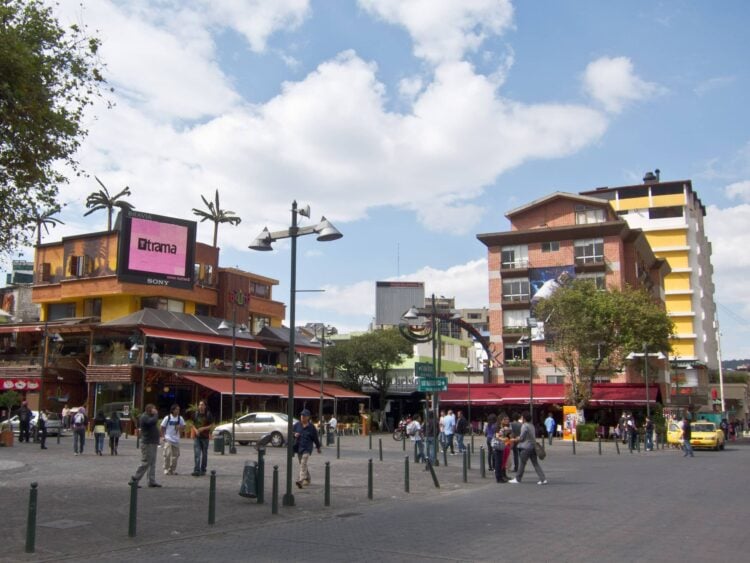 Plaza Foch is the epicenter of nightlife in Quito

Plaza Foch is the epicenter of nightlife in Quito, and the first place most visitors will go out for drinks upon arriving in the city.

As is typical of nightlife in Ecuador, weeknights are low key.

On the weekends, you can party late into the night and any of the nearby bars and discotecas, but be careful about walking home intoxicated.

Stick to a group if walking, and take a cab if you're a woman, or going back to the hostel alone.

Very good information about how to get around Quito and Ecuador, is always good to know about this things. I was in Ecuador last month and had a great experience in this country. In case you need more information and professional and friendly people to travel Ecuador yo can visit Gulliver Expeditions (www.gulliver.com.ec) they are in La Mariscal area. Very reccomend it.

I will be flying into Quito on September 1st at 9:55pm and would like to take a taxi to the South Terminal Quitumbe. are taxes available that late at night?

I'm going to take an educated guess and say yes. I've never been to an airport that hasn't had taxis available regardless of the time of day, and 10pm isn't that late. I think you'll be fine.

Good information, but some of it will strike unnecessary fear into first time travellers. Ecuadorian buses really are not as bad as you make out, Peru is much worse. Just keep an eye on your luggage. Also, if you're paying 14usd from Quimbote terminal to mariscos you're getting ripped off. 8 usd is more accurate

I certainly don't want to scare people away from visiting Quito or Ecuador, as I had a wonderful two months in the country.

All I can say is I found a lot of mentions online back in 2011 of bag slashings and robberies on buses, as well as having a friend who used to guide tours in Ecuador have thousands of dollars in photography gear stolen from beneath his nose on a Quito bus.

I felt more comfortable traveling on intercity buses in Colombia, Peru, Chile, and Argentina, which is not to say theft doesn't happen in those countries as well.

Hi, I am a senior traveller from Belgium. Sat; Oct 10 I will arrive in the afternoon by plane in Quito. I booked accomodation in Secret Garden. They proposed to collect me at the airport for $ 28 and I think it's too much. So I prefer to take the bus to the hostel. As you write, I will cross the exit gate of airport and take a bus but to which busstation ???

I don't know. I don't recall where I found that information, and I took a taxi.